There are things to like in the Autumn Statement. The reforms to end the “cliffs” in stamp duty and make it a more graduated tax are welcome, but even better would have been to replace stamp duty entirely with a tax on land values. Rather than taxing people who move, tax the unmoveable wealth that they have.

And if you have to raise taxes, few will feel sympathetic with multinationals who will find to harder to avoid taxes or banks who won’t be able to offset their accumulated losses against future taxes.

But the big issue that George Osborne failed to address was what has happened to the UK’s productivity. GDP per hour is more than 15% below where we would have expected on long-term pre-2008 trends. This is why wages are so low and the deficit remains high. There is nothing serious in the chancellor’s plans to tackle this pressing issue.

In 2010 George Osborne pledged to eliminate the structural deficit by the end of this parliament – the 2014-2015 financial year. This has spectacularly failed to happen with forecasts of government borrowing rising to £91 billion this year and no expectation of balancing the books before 2018-2019. And don’t hold your fiscal breath on it happening even by then.

So what went wrong? Less income taxes have come in than expected in the last year, partly because of the increase in personal allowances, but mainly because of low pay. It’s a stunning fact that real earnings have fallen by over 8% since 2008. Many jobs have been created, but they have generally been poorly paid ones. Low wages equals low taxes.

The fundamental problem is that growth has been pretty lousy under the chancellor’s rule. Don’t be fooled by the 3% headline GDP growth rate. The size of the economy is barely larger than it was on the eve of the crisis representing the worst recovery in over a century.

Our faster growth this year is like a “Harpo Marx” effect. The story goes that when Harpo was asked why he was banging his head against a wall. He responded: “because it feels so good when I stop.” Similarly, it is unsurprising to have strong growth when you’ve been pushed so far underwater. The real surprise is why it took so long.

A major cause of low growth was the chancellor’s decision to launch a premature austerity programme in 2010, which choked off the nascent recovery. Austerity eased somewhat since 2012-2013, but even the OBR estimates that this knocked at least a percentage point off growth in 2010-2011 and 2011-2012.

The Eurozone crisis also played a part, as EU leaders have administered the same fiscal medicine as Osborne with similarly disappointing results. Southern European countries can at least say they have no choice if they wish to keep the Euro, but there is no excuse for northern EU countries like Germany to insist on balancing their own budgets in the face of serious deflationary risks.

Attempting even more severe austerity to meet the 2010 targets – as some on the right have argued – would have been an even more serious error. But it is better to fail at imposing a silly policy than to cause terrible harm in trying to meet it.

So, what now to do about the UK’s poor productivity? Analysis by the LSE Growth Commission shows that Britain has a chronic problem of low productivity rooted in the failure to make long-term investments. This could be addressed by radical supply side changes in the way we support innovation, and educate, tax and finance our citizens.

The major way the government opted to reduce the deficit after 2010 was to slash public investment. With low interest rates, under-utilised resources and falling private investment, this was the exact opposite of standard economic advice. And the outcome was widely predicted. Rather than building, we dug ourselves into a deeper economic hole.

Some of this infrastructure destruction has been reversed, but the chancellor plans again to accelerate cuts to public spending to account for tax cuts after the election. Since public investment creates capital that can be used in the long-term, it should not be lumped in with current spending like civil service salaries. But for purposes of creating an absolute budget surplus it has been and so, once again, will be ripe for the chop. The Liberal Democrats and Labour Party rightly want to keep capital investment separate.

Let’s hope, if re-elected, this will be one more target that the government misses. 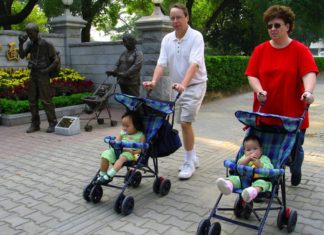 Staff Writer - November 24, 2014
By Monika Schmid, University of Essex How robust are languages learned in childhood but disused later in life? A new study by researchers at McGill...

3 things I learned from delivering medical aid to a remote...