Israel’s Knesset has voted to dissolve itself, and a general election is due to be held on March 17 2015.

Binyamin Netanyahu’s third government was a fractious one from the start, with many coalition members and acting ministers publicly contradicting or denouncing his policies at every turn. Nevertheless, Netanyahu has now chosen to disperse his coalition himself by firing and then publicly attacking two ministers from two parties on his left, while remaining silent about similar challenges made from the two coalition members that are more or less aligned to his right.

That shows precisely what Netanyahu is trying to achieve by calling an election: to recalibrate and regain control over his core vote, while simultaneously chasing Israel’s rapidly radicalising public opinion to the right.

In a speech that unofficially launched his campaign, Netanyahu argued that his current government was guided by three principles: preventing a nuclear Iran, demanding Palestinian recognition of Israel as the national state of the Jewish people, and continuing construction in East Jerusalem. He then accused the fired ministers of deliberately thwarting these policies.

Yair Lapid, Netanyahu’s erstwhile finance minister and head of the Yesh Atid party, was accused of denouncing the boycott of Iranian president Rouhani’s address to the UN in September 2013, stating that the demand for recognition of Israeli as a Jewish state is “rubbish”, and criticising Netanyahu’s plan to construct 1,000 units in East Jerusalem.

Meanwhile, Tzipi Livni, minister of justice and head of the Hatnuah party was accused of similarly undermining policy in Jerusalem as well as defying both a cabinet decision and Netanyahu’s own order and meeting Palestinian president Mahmoud Abbas.

The public announcement also occasioned a rare chance for journalists to present the prime minister with questions, something Netanyahu has adamantly avoided throughout his premiership. The questions asked by several journalists concerned the dismissal of the ministers – “why now?” and “why them?” – but he was characteristically unforthcoming.

Ministers from Netanyahu’s other coalition partners have criticised him even more harshly. Only last month, after Netanyahu said in a meeting with US president, Barack Obama, that he remains “committed to a vision of peace of two states for two peoples”, Naftali Bennett, head of the Religious Nationalist Jewish Home party and minister of the economy, directly responded that despite Netanyahu’s support “there will never be a Palestinian state”.

Even worse, Avigdor Liberman, foreign minister and head of the Yisrael Beytenu party, which split from Likud, levelled a barrage of criticism at Netanyahu’s policy in Gaza as well as his leadership in general.

Netanyahu has tried to recast his quiet response to this rightist criticism as simply putting these ministers in their place – whereas Lapid and Livni were supposedly conspiring to oust him in an imminent “putsch” in alliance with the ultra-orthodox parties.

Netanyahu has framed his call for new elections as a way of avoiding having to rely on coalition partners such as Livni and Lapid and bolstering his own camp: “I ask you to vote for the ruling party under my leadership, the Likud, in order to give me a real mandate to lead the people and the country.”

For months, though, he has been directly and vocally challenged by members of his own party. In July, he fired deputy defence minister Danny Danon who called him “limp” for agreeing to a ceasefire in Gaza. More recently, Netanyahu’s renewed commitment to the status quo in the temple mount, in response to a harsh statement by John Kerry, was criticised by Likud member and deputy transport minister Tzipi Hotovely, who demanded that “we must change the status quo”.

Feiglin, a settler activist who was convicted with sedition for his role in protests against the Oslo process (and who has been banned from entering the UK since 2008) has spent the past 14 years slowly building up his support within the party, primarily by enlisting thousands of religious nationalist supporters.

His ascent was successful despite the best efforts of Netanyahu, both within the party and eventually as an MK in the current Knesset, where he has made his mark on Israeli politics. In August, during the Gaza offensive he asserted his extreme right-wing position when he wrote an open letter to Netanyahu urging him to concentrate Gazans in camps and exterminate nests of resistance.

He frequently makes unabashedly messianic proclamations, extreme even for religious Zionism according to one of which “there is no existence without destiny. And for the Jewish People, there is no destiny without the Temple Mount”. On the other hand he has taken a more libertarian approach to less redemptive causes such as the legalisation of Cannabis. Whatever the statement, it is always delivered in an articulate manner, with a calm tone.

On November 9, in a meeting of the Likud central committee, Netanyahu proposed to hold internal elections much earlier in order to secure his leadership position for the next general election. While he managed to pass this resolution and elections were set to January 6, Feiglin managed to call a vote on a motion that would limit the next term for only six months in case no new elections occur.

The vote over the motion was controversially judged inconclusive; a secret ballot was set up only to be cancelled by Likud’s legal adviser. Nevertheless, Feiglin and his supporters had powerfully asserted themselves.

The evening ended with something even closer to a putsch than Netanyahu’s prolonged altercation with his ministers: the organisers of the ballot pleaded with Feiglin to address the crowd and calm his supporters down before the prime minister arrived, perfectly demonstrating the fevered internal dynamics of Netanyahu’s ruling coalition.

The world against Israel

Given the strong support to the right in general, evidenced both by latest polls and by a push to the right by factions in the Likud. Netanyahu’s attack on the leaders of the two parties to his left is a purely electoral move; in a sense, he is kicking centrists such as Livni and Lapid out to the wasteland of the left merely to propel himself further to the right.

Netanyahu’s Likud ally Gilad Erdan added the spin to Netanyahu’s kick when he claimed Lapid “sides with the world against Israel”, placing Netanyahu squarely in his comfort zone of belligerent foreign policy – defending Israel from Iran and fighting international pressure, even when voiced via his own appointed ministers.

Judging by Jordan’s bid to get the UN Security Council to command an end to the Israeli occupation by November 2016 and the wave of symbolic recognition of a Palestinian state by Britain, Ireland, Sweden, Spain and most recently, France, this pressure is only set to increase. But Netanyahu is well-poised to build an electoral strategy around these challenges.

He will be free from dealing with challenges within the Likud, and will most likely follow a politics that argues “now is no time for politics.” Expect him to to sideline other hopefuls and assert his position as an experienced, tough, capable leader.

There’s a long way to go till March 17 – but Netanyahu has laid the groundwork already. 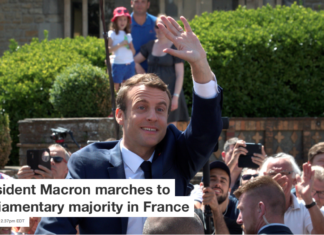 Staff Writer - June 12, 2017
Mabel Berezin, Cornell University “Bien joué” – or “well played” – was sprawled across a picture of Emmanuel Macron on the cover of the newspaper...

Name-calling in politics grabs headlines, but voters don’t like it –...