Rookie New York mayor Bill de Blasio – poster child for America’s insurgent progressives – has promised to rewrite “a tale of two cities” by seeking to narrow gaps between the haves and the have-nots across his vast metropolis. His signature effort leapt forward last month as de Blasio, just eight months in office, opened over 23,000 new classroom seats for eager four-year-olds, moving toward his goal of free and universal preschool for all young families.

But as our new research shows, most of these new slots went to better-off parts of the city – offering a vivid lesson in what goes awry when fresh entitlements ramp-up too quickly. In this case, market dynamics ironically swamped efforts to truly lift poor families, moving public dollars to middling families that expressed instant and fervent demand for preschool.

De Blasio, a forceful populist, promised to avoid President Barack Obama’s tendency to tack left and right. Earlier this year Obama focused on threadbare families, before zeroing back in on the electorate’s vast, relatively plump midsection and “their own daily battles, to make ends meet, to pay for college, buy a home, save for retirement” – aspirations that remain beyond the reach of most impoverished parents.

In contrast, in his victory speech last November de Blasio said he would not be distracted from the pressing needs of the poor. “The best and the brightest are born in every neighborhood,” and their destiny should be defined “by how hard they work, not by their zip code,“ the mayor said.

It turns out that de Blasio’s team created far more preschool seats in middling and well-heeled parts of the city than in poor neighborhoods, according to our tracking study, conducted at the University of California, Berkeley and based on data published by New York authorities.

The count of pre-kindergarten slots climbed 28% within schools spread across the city’s richest quarter of zip codes, relative to a 5% bump in the poorest quartile of communities. New preschool seats climbed 63% in Staten Island, where median household income is $70,560, according to the census bureau, compared with under 10% growth in the Bronx, where income averages $32,568.

The mayor’s office first responded by claiming that poor communities in New York City historically enjoyed greater preschool supply: they are just evening-out availability. But we have found no evidence to back this claim. Shifting ground, city hall then insisted that two-thirds of De Blasio’s new pre-kindergarten seats sprouted in zip codes that fell below the city’s median income, based on data they have yet to be publicly released.

While sobering, obvious forces led to this regressive implementation of a well-meaning initiative. The mayor’s staff – feeling stiff pressure from parents, children’s advocates, and the enthused editorial board of the New York Times – moved quickly to fund new seats in those neighborhoods where parent applications spiked and school or community organizations enjoyed ample space to carve-out new classrooms. City officials then allocated ample slots to communities with higher rates of maternal employment and more room to expand preschool.

Hopefully, de Blasio will take stock and consider mid-course corrections. For it’s difficult to see how he will narrow disparities in children’s early learning, traced along lines of race and class, by expanding pre-kindergarten education in better-off neighborhoods. Our earlier research shows how low-income children – as early as three-years-old – lag far behind middle-class preschoolers in oral language and cognitive skills.

More broadly, de Blasio’s debacle illustrates the Democrats’ persisting dilemma. Uniting the poor and middling families in common cause – say, to raise the minimum wage or make college affordable – holds enormous political appeal. It’s been a potent political strategy ever since French peasants stormed the Bastille in 1789, arm in arm with the nascent bourgeoisie, united against the ancien régime.

Democrats argue that humane societies must share the cost of minimal protections below which no citizen should be allowed to fall, as with affordable health care and social security. But the clumsy application of entitlements can advance, not lessen, inequality: from agricultural subsidies co-opted by wealthy farmers to pre-kindergarten funding that now flows to well-off families.

In contrast federal school policy – centered on lifting children out of poverty – has done just that over the past two generations under both Democratic and Republican presidents. The bottom one-tenth of elementary-age children has climbed two grade levels in their reading skills since 1978, according to the 2012 National Assessment of Educational Progress. The average student has inched up more slowly. Ditto with the success of public efforts to reduce childhood obesity and teen pregnancy in poor communities, or targeting federal financial aid via Pell Grants on college students most in financial need.

Such progressive gains – by awarding low-income parents the tools required to win a firm stake in American society – will not always sway better-off voters. And key policy efforts, like paid family leave or narrowing gender gaps in pay, can buoy a colorful spectrum of struggling families. Still, when Democrats carelessly press regressive entitlements for the middling mélange, hard-fought progress on fairness is lost for the very families these politicians claim to advance.

Bruce Fuller does not work for, consult to, own shares in or receive funding from any company or organisation that would benefit from this article, and has no relevant affiliations. 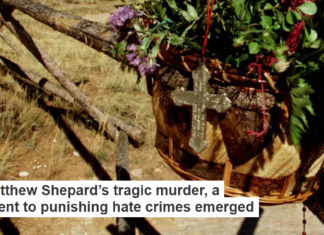 Staff Writer - October 12, 2018
Lara Schwartz, American University School of Public Affairs On an October night in 1998, Matthew Shepard, a 21-year-old student at the University of Wyoming, was...