By Scott Taylor, University of Birmingham

The decline in Tesco’s fortunes in recent weeks has been staggering. Falling sales and an accounting scandal have caused a slump in profits and the supermarket’s share price. Pre-tax profits fell 92% to £112m in its first six months while UK trading profit was down 55.9% to £499m.

Commentary has been almost relentlessly negative and critical. Some say the strategy of large out-of-town shops goes against changing shopping habits of “small, local, and often”. Others observe that the marketing is inept and fails to reach either Tesco’s existing customer base or reach out to potential new customers. Then there was failure of overseas initiatives such as Fresh ‘N’ Easy in the US, which is said to have cost more than £1 billion. And the cherry on top – perhaps the worst possible corporate news – the alleged misreporting of accounts by booking profits that didn’t exist.

As the fall-out of the recent scandal continues and Tesco’s bosses are forced to account for the future of the UK’s largest private-sector employer, there is perhaps one thing that upper management can take credit for. The way that the black hole in profits came to light and the fact that the employee responsible for bringing the facts to light appears (so far) to have been treated significantly better than many other whistleblowers.

The employee in question

This accounting scandal’s emergence into the public square is being traced to the actions of one employee. The staff member, anonymous so far, is reported to have approached the current chief executive, Dave Lewis, within weeks of his appointment, presenting him with evidence of accounting malpractice which suggested that up to £250m had been claimed as profit when it hadn’t in fact been collected.

The individual action of this employee, one of considerable bravery, is a classic example of whistleblowing. In recent years, this term has come to be associated with the social and political activism of Julian Assange and wikileaks, or Edward Snowden, Glenn Greenwald and The Guardian calling governments to account for their actions. All have faced significant legal and personal trials at the hands of those interests on which they were blowing the whistle.

Perhaps the most famous whistleblower in history was “Deep Throat”, the insider who famously guided Washington Post journalists Woodward and Bernstein as they sought to uncover evidence of then-president, Richard Nixon’s illegal activities in the early 1970s. Deep Throat’s identity remained secret for more than 30 years, known only to the two journalists he dealt with and their editor at the time, Ben Bradlee. This was no doubt for fear of any recrimination or reprisal for his actions.

Corporations also have an ignominious history of whistleblowing. The coinage of the term itself is usually attributed to Ralph Nader, the prominent American activist who made his name writing about the US car industry’s neglect of safety in automobile design in the 1960s. Nader’s work reached a peak in the mid-70s when Ford withdrew the Pinto, a model that had an inherently dangerous design which had clearly caused a series of driver deaths and serious injuries.

Shockingly, it later emerged that Ford executives had commissioned a team of employees to calculate how much it would cost to alter the design, set against how much it would cost to pay compensation to relatives of dead or injured victims. Not only did company executives decide to continue to produce dangerous vehicles because of what this calculation produced, they also felt able to assign a monetary value to human life. It was journalists who traced this decision-making process when they were supplied with internal memos that detailed the discussions Ford employees had.

More recently there was a famous case of corporate whistleblowing by Sherron Watkins who revealed accounting malpractice at Enron. Her testimony to politicians in the early 2000s led to the demise of Enron and its auditor Arthur Andersen.

The details of what has happened at Tesco are, of course, only slowly emerging, and may differ from the illegal practices found at Enron. It is unlikely that Tesco will disappear. Watkins, in common with many whistleblowers in the US and UK, has not found life easy since she acted.

So far it appears that, in comparison, Tesco executives are managing the whistleblowing process effectively. Of course, they are legally required to protect employers who do step forward, but past examples show how difficult it can be for employers to step out.

Academic research on the matter is lacking, but sociologists observe that when someone blows the whistle on unethical or illegal practices, the corporate and state response tends to focus on the individual – not the allegations – to suggest that the person is “trouble” or unstable in some way. Unfortunately this can be successful in deflecting attention from the issues raised, as well as damaging to the person and their family.

Tesco executives seem to be doing something else – taking the allegations seriously, investigating them relatively quickly, clarifying what has happened and who enabled it to happen. The whistleblower, whoever he or she is, also seems to be in a protected position. Anonymity, at least outside the organisation, is crucial to this.

The fact is, social psychologists tell us, the individuals who whistleblow tend (counter-intuitively) to be rule-followers, conscientious, respected by colleagues, acting as good citizens rather than through a destructive impulse.

The current chief executive would certainly have wished for a different introduction to his new job, but he should perhaps be reassured by two things. First, he seems to have created an opportunity when he arrived for one brave individual to challenge a notoriously closed, intensely macho culture and its associated unethical or deceptive practices.

And second, the corporate response may indicate that there is yet hope, at least to develop an organisation in which social and economic responsibilities are part of decision making process.

Scott Taylor does not work for, consult to, own shares in or receive funding from any company or organisation that would benefit from this article, and has no relevant affiliations. 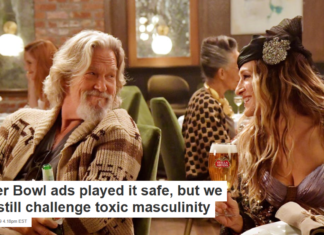 Staff Writer - February 4, 2019
Dillon Thomas Browne, University of Waterloo After this month’s online commotion about the #MeToo Gillette ad and a previous spot by Nike inspired by Black...