American officials, agencies and communities are working to bring Ukrainian refugees into the U.S., too. But as a scholar of global migration, I believe it’s worth bearing in mind that many displaced Ukrainians – both refugees and what are known as “internally displaced persons” who have fled their homes but are still in Ukraine – want to stay close to home so they can go back when the smoke clears.

While Putin’s army pummels their homeland, and Ukrainian forces defend it as best they can, many displaced Ukrainian women and young people are not planning to migrate to other countries but are waiting on the sidelines.

That includes Ukrainians like one young woman, Yuliia Kabanets, who has worked professionally with displaced people and is entering a graduate program in the field. Yuliia, now in Lviv, has also been displaced twice herself within Ukraine, once in 2014 when Russia occupied the part of Donetsk where she lived, and during the current war. She wrote an analysis for me about what she’s seen there since the beginning of this war. With her trained eye, she offers a fresh understanding of a lesser-known aspect of the conflict: why Ukrainians are staying in, or returning to, the country, often at great risk to themselves and their families:

“With the Russian full-scale invasion of Ukraine, I found myself fleeing the war for the second time. It was both easier and harder for me: on the one hand, I know what it is like, on the other hand, I have experience[d] pure hate against those who make me do that again.”

They are doing their best to support the defenders, and longing for the day they can return to their hometowns. They are staying close to home despite the dangers – and, for some, despite having been displaced more than once.

On April 6, 2022, the Ukrainian government began urging civilians to leave the Donetsk and Luhansk regions in eastern Ukraine while it was still possible. Russia’s planned offensive to capture that territory was looming.

Parts of Donetsk and Luhansk have been occupied by Russia since 2014. Including people displaced from Russian-annexed Crimea, some 1.46 million Ukrainians were registered as internally displaced people already in 2021.

Today the International Organization for Migration, a United Nations agency, estimates that there are 7.7 million people internally displaced in Ukraine, most coming from the east of Ukraine and the Kyiv region.

In some Ukrainian cities, internally displaced persons comprise a large percentage of the population: 44% of the people in the Luhansk region’s city of Severodonetsk, 20% in the Donetsk region city of Mariupol, and 13% of the Kharkiv region city of Izyum.

Those cities have suffered from active hostilities during the two months of the full-scale war. Despite the violence, Yuliia believes she’s had relatively good fortune over those months:

“I’ve been lucky: I plan to go back to Kyiv soon – my rented flat there has not been damaged (so far), and nor has my family’s flat in Donetsk. … Meanwhile, people I know who have moved to Mariupol from Donetsk, have now lost their home for the second time: and their property was destroyed or burnt down.”

Even in longer, more drawn-out conflicts around the world where millions have been displaced, such as Afghanistan and the eastern Democratic Republic of the Congo, many people do not leave their home areas, despite great danger.

‘We are all grateful’

Why do they stay? Speaking of those who have not left the Donetsk and Luhansk regions, despite warnings from the Ukrainian government, Yuliia says:

“Even though it seems irrational to stay, I can understand their point. The war has been next to these people’s homes for eight years. Many find it difficult to leave their home and go into the unknown, even if that may save their lives. The lack of housing opportunities in the Western regions of Ukraine does not help to solve the situation either.”

What about those who leave the country? Do they want to be permanently resettled in countries like the U.S.? Yuliia says Ukrainians are met with open arms in many countries:

“We all are grateful for that. However … nobody wants to run from the war, and being far from your own country during these times can be devastating. One of the big issues is also family separation, as conscription-aged men are not allowed to leave the country because of the war.”

Yuliia thinks that most Ukrainians who have left where they live plan to return soon or after the war. And many Ukrainians are in fact going back home, despite the continuing danger. Since Feb. 28, 2022, 1.7 million Ukrainians have returned to Ukraine, although it is not clear whether their return is permanent. That’s because some people may come back for a short time to check on or take things from their apartment. Since April 15, 2022, the number of those returning to Ukraine from Poland has been greater than those going to Poland from Ukraine.

People come back for different reasons: lack of available housing or the inconvenience of staying with relatives abroad; the difficulty of finding a job in a new place; or because they want to be with relatives who remained in Ukraine.

People also return for emotional reasons. Yuliia briefly left Ukraine in March to visit her partner, who was waiting in Poland.

“My own experience of being out of Ukraine for a week has shown me that I am not ready to not be in Ukraine now. I was told the same by many people: it is psychologically easier for them to be in Ukraine, even if nowhere is safe, even if their hometown is constantly under shelling from the Russian occupants.”

Whatever the reasons, it seems clear that many – perhaps most – want to return to Ukraine from abroad and probably are not looking to migrate further. Inside Ukraine, people return to places that become safer: More and more people are coming back to the relatively safer Kyiv, even though the mayor is asking them to wait.

Certainly there are Ukrainians who would like to be resettled as refugees. But many want to stay at home or return quickly. For those who want to help Ukrainians, this is the reality that they should understand, so their efforts reflect the real needs of people driven from their homes, and who just want to go back. 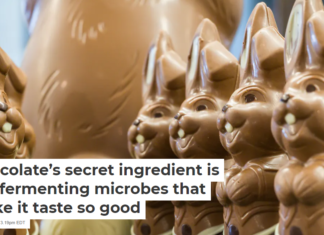 Chocolate’s secret ingredient is the fermenting microbes that make it taste...

Staff Writer - April 5, 2021
Caitlin Clark, Colorado State University Whether baked as chips into a cookie, melted into a sweet warm drink or...

Cell towers have come to symbolize our deep collective anxieties

The World Cup puts the spotlight on Qatar, but also brings...