What does it mean to “die well”?

The world got an idea recently from the 92-year-old Buddhist monk and peace activist Thich Nhat Hanh, who popularized mindfulness and meditation in the U.S. The monk returned to his home in Vietnam to pass his remaining years. Many admired his desire to live his remaining time in peace and dignity.

Researchers from the University of California, San Diego recently did a literature search to understand what Americans might consider to be a “good death” or “successful dying.” As can be expected, their findings varied. People’s views were determined by their religious, social and cultural norms and influences. The researchers urged health care providers, caregivers and the lay community to have open dialogues about preferences for the dying process.

As scholars who study social health and human services psychology, we found something missing in these conversations – how race impacts life span.

It’s important to recognize that not everyone has an equal chance at “dying well.”

Take the disease burden of the African American population.

African Americans experience an earlier onset and greater risk of what may be referred to as lifestyle-related diseases, including cardiovascular disease, stroke and diabetes. More than 40% of African Americans over the age of 20 are diagnosed with high blood pressure, compared to 32% of all Americans.

In addition, the Centers for Disease Control and Prevention reports that the likelihood of experiencing a first stroke is nearly twice as high for African Americans compared with whites. African Americans are more than two times more likely to experience a stroke before the age of 55. At age 45, the mortality rate from stroke is three times higher for blacks compared to whites.

This disease burden consequently leads to their higher mortality rates and overall shorter life expectancy for blacks compared to whites.

And while the life expectancy gap differs by only a few years, 75.3 for blacks and 78.9 for whites as of 2016, research suggests that African Americans suffer more sickness. This is due in part to the increased prevalence of high blood pressure, obesity and diabetes in this population.

Genetics, biological factors and lifestyle behaviors, such as diet and smoking, help explain a portion of these differences. However, researchers are still learning how race-related social experiences and physical environments affect health, illness and mortality.

One factor is that African Americans have historically underutilized preventive medicine and health care services. They also delay seeking routine, necessary health care – or may not follow medical advice.

One study found that during an average month, 35% fewer blacks visited a physician’s office, and 27% fewer visited an outpatient clinic compared with whites.

“The only time I go to the doctor is when something is really hurting. But otherwise, I don’t even know my doctor’s name,” said a young African American male during a research study in Chicago, Illinois.

There are reasons for this mistrust. Researchers who study medical mistrust argue that high-profile cases of medical experiments are still playing a role in how African Americans view health care systems and providers. In the past, physicians have intentionally done harm against people of color. A well-known case is the Tuskegee Study of Untreated Syphilis in African American men, which lasted from 1932 to 1972.

In this clinical study, 399 African American men, who had already contracted syphilis, were told that they were receiving free health care from the government. In fact, doctors, knowing their critical condition, were awaiting their deaths to subsequently conduct autopsies and study the disease’s progression.

Even though penicillin had been proven to treat syphilis by 1947, these men were denied the treatment.

Why discrimination matters for health

Other studies suggest that regardless of their knowledge of past medical abuse, many African Americans have low levels of trust in medical establishments.

“Doctors, like all other people, are subject to prejudice and discrimination,” writes Damon Tweedy, author of “Black Man in a White Coat: A Doctor’s Reflections on Race and Medicine.” “While bias can be a problem in any profession, in medicine, the stakes are much higher.”

In addition, a growing body of literature has established that experiences of discrimination are extremely harmful for physical and mental health, particularly among African Americans.

This research adds to the body of evidence that experiences of discrimination harm people’s health and may contribute to the increased rates of premature decline and death among blacks.

What does it take to die well?

African Americans are also exposed to earlier and more frequent deaths of close loved ones, immediate family members and friends.

Before defining “a good death,” American society must first begin to fundamentally address how to promote quality living and longevity across all racial groups. 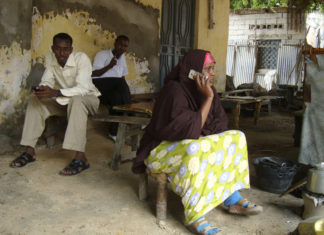 Staff Writer - November 3, 2014
By Andrew Revkin, Pace University A prime driver of human progress has been trade, in both goods and ideas. Isolation, in contrast, leads to...

After a data breach, it’s consumers left holding the bag

Everything in Mecca gets 5 stars — and online reviews of...