What makes some images memorable and others easily forgotten? It’s a question I’ve been studying for nearly 20 years.

Estimates suggest that more than 1 trillion photos were taken in 2018.

With so many in circulation, it’s difficult for any single photo to capture our attention and become a famed iconic image.

In the golden age of photojournalism, news photographs became iconic largely because they appeared on the front pages of newspapers around the world – think Iwo Jima and the Hindenburg.

But that age has come to an end: Digital journalism and social media have changed the way we consume images. Each day, audiences are bombarded with photos. Many are shocking, inspiring and heartbreaking. But in their overwhelming volume, they’re easily forgotten.

Nonetheless, some do rise to the top.

Two colleagues and I developed a model to help predict when and how certain images may become widely known.

The model shows that certain characteristics of an image – such as its timeliness, its cultural resonance, its political potency or its likelihood of being turned into a meme – can influence its rise and reach.

On Feb. 14, a gunman opened fire at Marjory Stoneman Douglas High School in Parkland, Florida, killing 17 people and injuring 17 others. Following such a mass shooting, there’s a predictable pattern of news media coverage – breaking news reports filled with speculation, details about the perpetrator, elected officials responding with “thoughts and prayers” and debates about mental health and gun control.

But after the shooting at Stoneman Douglas High School, we saw something new: images of resistance. The students there spoke fervently, demanding action from elected officials.

These images of resistance spurred school walkouts and nationwide protests, culminating in the March For Our Lives.

A photo of firefighters goes viral

Forest fires continued to rage in 2018.

During the devastating Carr Fire that burned more than 200,000 acres and claimed the lives of three firefighters, Redding, California resident Richard Tuggle captured a photo of five firefighters resting in a backyard in his neighborhood on July 27. The firefighters were clearly reeling from the exhaustion of battling the deadly fire.

What’s particularly interesting about this photo and its rise to prominence is that it was captured by a citizen rather than a journalist. The photo went viral on social media and was ultimately picked up by news outlets across the country, showing how instant news icons can come from citizens as well as journalists in this new age of photography.

Amid controversy and protests, the Senate narrowly confirmed Brett Kavanaugh’s nomination to the Supreme Court on Oct. 6.

The contentious confirmation hearings pitted the image of an incensed Kavanaugh against images of impassioned protesters standing in solidarity with a calm, composed Christine Blasey Ford.

In early October, Saudi journalist Jamal Khashoggi disappeared. The Saudis initially denied that they had anything to do with his disappearance.

But security-camera footage emerged showing Khashoggi entering the Saudi Consulate in Istanbul. It served as evidence to support the claim – later confirmed – that he was killed inside.

In this case, the image was captured by a security camera, rather than a photographer. Nonetheless, it became an instant news icon. It’s just another example of the changing nature of the production and consumption of news imagery.

Time magazine named journalists as their 2018 Person of the Year, partly in response to the Khashoggi killing.

A devastating war in Yemen has led to economic instability and widespread food shortages.

A few days later we learned that Amal Hussain, the 7-year-old girl in Hicks’ haunting photo, had died.

Journalists have continued to document this humanitarian crisis. In mid-December the Senate voted to end U.S. military support to Saudi Arabia in Yemen.

But the crisis continues, and millions of people still face starvation.

The politics of immigration

Political, economic and ethical debates about immigration dominated the year, with two photos driving the conversation.

Getty photographer John Moore’s image of a 2-year-old Honduran girl in a pink shirt sobbing as U.S. Border Patrol agents searched her mother became the face of Trump’s “zero tolerance” family separation policy. The image was even modified for a Time magazine cover under the headline “Welcome to America.”

The image continued to spur discussion after it was made clear that the mother and daughter were not actually separated. However, hundreds of other children have been separated from their parents and recently a 7-year-old girl in Border Patrol custody died.

Then, on Nov. 25, Reuters photojournalist Kim Kyung-Hoon snapped a picture of a mother and her twin daughters fleeing tear gas at the border wall between the U.S. and Tijuana, Mexico. Appearing in news outlets and on social media feeds across the country, it spurred further public and political outrage.

Some said the photo effectively contradicted Trump’s narrative that refugees were dangerous. Others noted that the photo evoked the iconic image of a naked Vietnamese girl screaming in pain following a napalm attack. 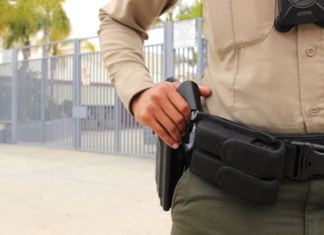 School resource officers aren’t arrested often – but when they are,...