The Eatwell plate is the UK government’s official food guide about which foods we should eat to achieve a healthy diet. It is essentially a pie-chart depicting the recommended intakes of five specified food groups: fruit and vegetables, dairy products, cereals, meat and processed foods. It was first published 20 years ago – and despite some two decades of nutritional research has not been changed since.

In some countries – notably Australia, the US and Brazil – the official food guide is revised on a regular basis. Some two decades since it was first published, Public Health England has announced that it will revise the Eatwell plate in the light of proposed new recommendations on sugar from the government’s Scientific Advisory Committee on Nutrition.

The types of food we eat and the challenges for a healthy diet have changed significantly over the past 20 years. In particular we now know that added sugar is much more harmful to our health than we thought back then. We are now much less convinced that fruit juice – consumption of which is 15 times that in the 1970s – is much healthier than sugary soft drinks. And the need to cut down on red meat in our diets has become clearer, as has our need to reduce saturated fat intake rather than total fat intake.

Many people have rightly argued that the Eatwell plate is now out of date and some recent government publications, such as the new standards for school food published earlier this year, have not referred to it at all. Now is the opportunity to undertake a fully comprehensive review and here are some issues for Public Health England to consider.

Today we are not just concerned about our diets for health reasons; there are various other considerations that shape our choices, such as environmental sustainability in food production, animal welfare and Fair Trade – and the Eatwell plate needs to take account of these wider concerns. The guide already takes account of practicalities, for example it sensibly only shows foods that are readily available. But we now know that the ways in which we consume our food not only affects our health but that of the planet and therefore the health of future generations. It is unforgivable to ignore this fact when providing dietary advice.

All of these things need to be taken into account when revising things such as the angles of the segments and how and where in the guide foods are depicted. The World Wildlife Fund has produced its own version of the Eatwell plate called the Livewell plate, which shows how this can be done.

Much has been discovered and published during the past 20 years which has changed our understanding of food. Revision of the Eatwell plate – merely to take account of one government report – seems illogical. This rare opportunity should be used to develop a systematic and transparent approach to reviewing current evidence and to undertake a comprehensive review of the Eatwell plate to reflect all of the dietary challenges we face today.

Mike Rayner’s salary is funded by the British Heart Foundation. He is Chair of Sustain: the alliance for better food and farming and a trustee of the UK Health Forum, 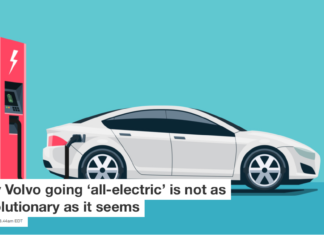 Staff Writer - July 10, 2017
Jim Saker, Loughborough University The announcement from Volvo that all of its new models from 2019 will include an element of electric vehicle technology was...

Despite research breakthroughs, an anti-aging pill is still a long way...