When we make important social decisions – which political candidate to vote for, whether to trust someone with our money, whether a person is guilty of a crime – we’d like to think we do so rationally, and solely based on relevant pieces of information. After all, given the high stakes involved, we’d be foolish not to take these choices seriously.

And yet, a growing body of research suggests that even these crucial decisions may be significantly influenced by one of the most superficial and seemingly irrelevant factors we can imagine: facial appearance.

The human face certainly conveys potentially relevant information about a person’s gender, age, ethnicity, attractiveness, and emotional state. However, research shows that our evaluations of other people’s facial characteristics don’t stop there: we also form judgements about their underlying traits, such as how competent, politically conservative, or trustworthy they are.

These inferences, in turn, influence our decisions about others, and not just trivial day-to-day choices (whether to sit next to that eccentric-looking passenger on the bus or find another seat). Social attributions from faces have been shown to affect decisions with important societal implications.

Facing up to it

In politics, for example, research coming out of our labs and others, has shown that politicians who have faces that make them look competent are more likely to win elections (all else being equal) than their less competent-looking rivals. We’ve also found that, in the US at least, right-leaning voters (those who tend to vote Republican) are more likely to vote for a candidate with a stereotypically Republican-looking face, even if that person is actually a Democrat. This is also surprising since candidates’ political affiliations are clearly presented on the voting ballots.

Interestingly, this relationship between political facial stereotypes and voting does not apply to left-leaning voters in the same way: they are not more (or less) likely to vote for candidates who have stereotypically Democrat-looking faces. However, left-leaning voters are just as susceptible to voting based on facial competence.

Critically, there is also rigorous causal evidence that facial trustworthiness actually affects investment choices (rather than merely being associated with it). We have conducted laboratory studies in which we manipulated faces to make them look more (or less) trustworthy. These studies showed that making a given face more trustworthy-looking increases how much others invest in that person, whereas making the same face more untrustworthy-looking decreases investments. This bias remained significant even when investors were given information about the person’s history (how often in their past interactions they had acted in a trustworthy manner).

These findings that show that important social outcomes are influenced by facial appearances would be less worrying if human faces were valid and reliable indicators of their owners’ underlying characteristics. Unfortunately, careful examination of the evidence suggests this is not the case. When it comes to guessing specific, measurable characteristics (such as whether someone has a criminal history) from facial structure, we perform somewhere between chance and slightly above it.

Our accuracy also drops considerably when we cannot rely on gender, ethnicity, or age to aid our judgements – imagine, if you can, an election consisting entirely of middle-aged Caucasian male candidates. Worse still, our reliance on appearances leads us to severely neglect other, and better, sources of information, which further harms the quality of our judgements. But the most damning piece of evidence, at least for physiognomy aficionados, may be a recent paper which showed that social attributions can vary substantially across different photos of the same person – a finding that is clearly inconsistent with the idea that people draw reliable judgements from facial morphology.

All this leads to the following two conclusions: that many of our most important social decisions are biased by faces, and despite what many of us would like to believe, we are not skilled at judging character traits from faces. Therefore, we need to take steps, both individually and as a society, to reduce the negative impact of “face-ism” or facial stereotyping. We can start by thinking twice the next time we’re inclined to make strong assumptions about someone purely based on their face.

Christopher Olivola receives funding from The British Academy, the Royal Society, and the John Templeton Foundation. 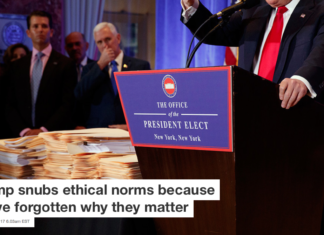 Staff Writer - January 18, 2017
Elizabeth C. Tippett, University of Oregon Let’s be honest. Conflicts of interest are boring. The president-elect knows this. In fact, he’s banking on it. Instead of addressing...