By Becky Freeman, University of Sydney

From January 2012, all tobacco products have been sold in plain packs with graphic health warnings. The goal of plain packaging was always to reduce the appeal and allure of tobacco products to young people and prevent a new generation of Australian smokers.

The three-year survey shows just 12.8% of Australians over the age of 14 are now smoking on a daily basis. This is a significant decline from the 2010 survey when smoking rates were 15.1%.

While plain packs aren’t the sole contributor to reduced smoking rates, it appears to have played a key role in driving rates down.
Tax increases, highly emotive mass media campaigns, smoke-free public spaces, and bans on tobacco advertising have also contributed to this falling prevalence of smoking.

In an effort to downplay the importance of Australia’s world-class tobacco control program in achieving this success, Imperial Tobacco has painted these figures as merely being part of an existing downward trend.

But the numbers do not lie; this is the single biggest drop in smoking rates to be observed in twenty years, with rates plummeting by 15.5%. This chart shows the decline in daily smoking rates from 1991 to 2013.

There’s no doubt that increasing the price of tobacco products is one of the strongest predictors of both reducing smoking rates and the amount that people smoke. And it’s true that tobacco products have become increasingly expensive since 2010.

But the link to the effectiveness of plain packaging is strong. The 2013 data were collected from July and completed well before the most recent tobacco tax increase in December 2013.

The tobacco industry is well aware that evidence is mounting in support of plain packs. A recent qualitative study from the University of Newcastle found that smokers felt that following the implementation of plain packaging, the quality of tobacco products had declined and that cigarettes now all tasted the same.

These consumer comments echo the tobacco industry’s own words. A British American Tobacco official summed it up perfectly:

one of every two smokers is not able to distinguish in blind (masked) tests between similar cigarettes …for most smokers and the decisive group of new, younger smokers, the consumer’s choice is dictated more by psychological, image factors than by relatively minor differences in smoking characteristics.

The 2013 survey also reveals that current smokers are smoking less. Weekly cigarette consumption is down from 111 cigarettes in 2010 to 96 in 2013.

This completely dismisses the myth that plain packaging laws led to existing smokers increasing the amount they smoked as they switched to more budget-friendly tobacco brands.

Having lost the battle to prevent plain packaging from being implemented in Australia, the tobacco industry must now focus its efforts on preventing the spread of this policy to other nations.

Ireland is poised to adopt plain packaging laws and the good news that Australian smoking rates have fallen following plain pack laws will only strengthen the resolve of the Irish government.

One of the dangers of celebrating this good news is that the public and policymakers may view tobacco control as being “done” in Australia. Despite daily smoking levels reaching an all-time low, it remains a leading cause of entirely preventable illness and early death. We need more than plain packaging to continue driving smoking rates down.

Maintaining momentum will require continued leadership in innovative legislative reform. While measures to reduce consumer demand for tobacco products have been well adopted, for example, very little progress has been made in restricting the supply of tobacco products. It can be sold virtually anywhere, anytime, to anyone, in any amount.

For good news to be repeated in the next survey in three years’ time, we need decisive action to stop treating the sale of tobacco like any other consumer good and more like the deadly poison that it is. 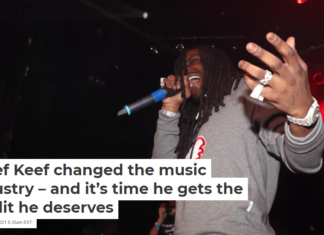 Staff Writer - November 12, 2021
Jabari Evans, University of South Carolina Before he was arrested in December 2011, Chief Keef was a 16-year-old budding...

Why would anyone want to sit on a plane for over...

What Plato can teach you about finding a soulmate

Why science can’t really tell us whether pets are good for...