Postpartum depression has become more visible as celebrity moms including Brooke Shields, Drew Barrymore and Chrissy Teigen have publicly shared their struggles with feeling sad and hopeless after birth. But when a father – Adam Busby, from reality TV show “OutDaughtered” – recently opened up about his own postpartum depression, he received instant backlash, including comments telling him to “man up.”

Testosterone is an androgen hormone, responsible for the development and maintenance of male secondary sex characteristics. It promotes muscle mass and body hair growth, and motivates sexual arousal and competitive behavior.

Many studies have found that testosterone dips in new fathers across the animal kingdom. Among animals that engage in the biparental care of offspring – Mongolian gerbils, Djungarian hamsters, California mice and cotton-top tamarins – males show lower testosterone levels following the birth of pups.

Human males also often show declines in testosterone around the birth of their infants. In one of the largest studies of testosterone and fatherhood, anthropologist Lee Gettler and his colleagues followed over 600 single men in the Philippines for about five years. If men became partnered fathers during that time, their testosterone levels decreased more than the men who stayed single. Gettler also found that fathers who spent more time with their children showed lower testosterone, suggesting that testosterone may be suppressed by paternal caregiving.

Along similar lines, psychologist Robin Edelstein and I found that men assessed repeatedly over their partner’s pregnancy showed declining testosterone levels from early to late pregnancy. Men whose testosterone dropped more dramatically were more likely to report postpartum commitment and investment in their romantic relationships with their partners.

Researchers still haven’t identified exactly what causes men’s testosterone to change over the transition to parenthood. Possible suspects include proximity to the partner or infant, increased stress or disrupted sleep and exercise routines.

Previous research has linked testosterone with men’s depression levels in general. Low testosterone may contribute to the feelings of lethargy and disinterest in normally pleasurable activities that characterize depression. In fact, some psychiatrists have even suggested prescribing testosterone supplements to treat depression in men. However, no studies had specifically looked at the potential role of testosterone in fathers’ postpartum depression.

My colleagues and I analyzed data from the Community Child Health Research Network, a National Institutes of Health-funded study of new parents’ health and well-being. The study recruited moms after the birth of an infant and followed them for several years, along with their partners. At one of the study sites, in Lake County, Illinois, men also provided saliva samples for testosterone analysis when their infants were around nine months old. Both moms and dads reported on their symptoms of depression several times across the first few years of parenthood.

We found that dads with lower testosterone reported feeling more depressed. This fits with other research into how testosterone and depression work together. But ours is the first study to observe this relationship specifically in fathers of infants. Given that many men show drops in testosterone over the transition to parenthood, this finding may help explain why the postpartum period is such a high-risk time for depression in men.

An unexpected side effect – for the moms

In other words, having a low-testosterone mate might make for a better-quality relationship, in turn reducing the likelihood that women will become depressed. We know social support from a partner can protect women against developing postpartum depression, so our finding fits with that research. Lower-testosterone men may be more dedicated to their relationships or spend more time with children, helping to relieve some of the pressure on moms.

At around 15 months postpartum, we also checked moms’ ratings of whether their partners hurt, threatened, yelled at or insulted them. If men had higher testosterone, moms reported higher levels of intimate partner aggression about six months later. Testosterone is associated with more aggressive and competitive behavior. Our finding shows a potential dark side to high testosterone in the postpartum period.

Dads also told us about their parenting stress at 15 months postpartum, reporting on emotions such as feeling trapped by parenting responsibilities, believing their children made too many demands on them and lacking warm feelings toward their children. At first, we didn’t find a link between men’s testosterone levels and their parenting stress. But after we statistically controlled for the relationship between low testosterone and depression, we saw that higher testosterone put men at greater risk of experiencing problems in the parenting relationship. This result suggests that, once you adjust for their potentially lower risk of depression, high-testosterone men may find parenting to be more stressful.

A happy medium for testosterone?

Our results suggest that fathers of infants might be at risk at both sides of the postpartum testosterone spectrum. At low levels, they might be more vulnerable to depression. But at high levels, they might have less satisfying and more aggressive relationships, less happy partners and more parenting stress. In terms of resilience to depression and stress, men with average levels of postpartum testosterone seemed to fare best.

Our findings reveal that men’s postpartum testosterone has a complex relationship with family health. From an evolutionary perspective, lower testosterone during the transition to parenthood may help motivate men to invest in their family. In the animal kingdom, lower-testosterone males spend more time with infant pups and show less aggression toward them. So it makes sense that human males would show shifts in testosterone as they adapt to parenthood.

But these shifts may make men more vulnerable to mood disorder symptoms. Perhaps this is because lower-testosterone men are taking a more hands-on role in the family and helping more with infant care. Their contributions are great news from the family’s perspective, but may put men at heightened risk of some of the same depressive symptoms that many new mothers face.

After all, caring for infants is hard, draining work. In modern industrialized societies like the United States, many new parents lack the extended family support networks that can help lighten the burden of childcare. And in the U.S., paternity leave is a rarity, and many dads struggle with family-unfriendly work arrangements that drain time and energy. Just as new moms can feel overwhelmed and isolated after spending long hours tending to their babies, so too can dads.

If new dads (or moms) are experiencing depressed moods after the birth of their infants, they can take some comfort in the fact that these feelings are normal – and may even be rooted in our evolutionary biology. There’s no shame in seeking help, whether it’s talking to a friend, prioritizing sleep and exercise, or visiting a therapist. Postpartum depression affects the whole family and should be taken seriously. 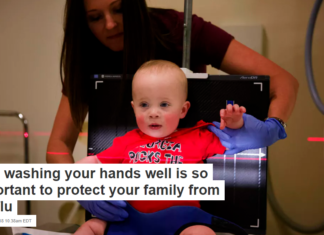 Staff Writer - October 23, 2018
Michelle Sconce Massaquoi, University of Oregon During my second year of graduate school, I moved in with my sister’s family to save money. “You must...

Brain scans help shed light on the PTSD brain, but they...