This week we have witnessed a plunge in the price of oil and the astonishing demise of the ruble. These events provide the basis for a great series of conspiracy theories, the type that readily find an audience in Russia and Eastern Europe.

Imagine two elderly Russians discussing these issues over a glass of tea. Was this situation the product of the US and Saudi Arabia secretly working together to attack Russia, they ask? After all, the Americans are always trying to contain Russia and the Saudis promote a particularly militant form of Islam among Russia’s large minority Muslim populations. Or was this a conspiracy of western bankers contriving to sell the ruble short and make their fortunes? Or was it both?

Whichever our two Russians chose, it has the making of a good Hollywood script. The key question, of course, will be who plays the US president in the movie? If history is any guide, it’ll be an athletic Denzel Washington or a wise Harrison Ford. Vladimir Putin will, of course, be played by Kevin Spacey – unless he is already playing Obama. Then it’ll probably be Jeremy Irons, given his proclivity to play a steely-eyed, sophisticated villain.

Conspiracies are always fun because you don’t need any facts. The principle of Occam’s razor, on the other hand, suggests that the simplest explanation is probably the correct one.

The writing was on the wall

Plentiful supplies and new sources of alternative energy have driven down the price of oil and gas. It is a trend that has been developing for years. Russia has little to sell except oil and gas – and Russian dolls. The economic sanctions imposed by the West against Russia have simply exacerbated the problem.

In 2009 Russia steeply raised interest rates and that worked to stem the ruble’s demise. So its central bank tried the same this week. But times have changed. The prospects for oil price rises look bleak. Russia now has a track record of raising rates without then introducing reforms.

Both foreign investors and IMF officials feel that they have been cheated by a corrupt Russian system. So they presumably don’t want to jump in and support the ruble again. And they calculate that the Americans, and maybe the Europeans, will introduce more sanctions, not reduce them. Oh, and the Saudis aren’t supporting the price of oil because they sit on piles of cash. They can wait out the demise of their less wealthy competitors – like the smaller American firms investing in fracking.

You don’t need a conspiracy to see how this happened. Just a handful of relevant facts and a few simple assumptions.

But rather than focus on the cause of the current situation, it may be more prudent to think about its consequences.

What will happen now?

Russia’s economy, recently forecast to contract slightly next year, will now certainly get heavily squeezed. Russia’s few super-rich already have their money nestled in bank accounts in other currencies throughout the globe. A few may even leave altogether for fear that they will get caught in the ensuing crossfire. The new wealthy professional class are lining up to buy everything from imported cars to vegetables as their currency depreciates. Russia’s vast number of poor, hitherto Putin’s most strident supporters, will be the ones who suffer the most.

Putin, having calculated that an argument with the West – see Crimea and Ukraine – would enhance his support among Russian nationalists may now have to rethink his strategy. Will his supporters blame the West or reconsider and blame him?

It is one thing to cloak yourself in victimhood as you stand up to those disrespectful American bullies. It is quite another when Apple refuses to sell you products while your own finance minister and central bank officials are publicly squabbling. My money is on the two guys sipping tea continuing to blame the West.

Russia, of course, cannot be seen to capitulate. Inside of Putin’s Russian doll are the ghosts of former leaders who are seen by Russians to have done so, notably Gorbachev and Yeltsin. As Putin often stresses, he is made of sterner stuff. The fear is that the situation will spiral out of control -– with too great a shock to global markets as a stubborn Putin becomes even more strident in Ukraine.

A “grand accord” on Ukraine?

So it is now up to the Americans and the Europeans to address the problem. They have demonstrated that their economic power can outwit Russian military prowess. Sanctions seem to have effectively outmaneuvered and counteracted the effects of Russian weaponry. Yet this is not the time, in my view, to try and press home their advantage. They must appear benign and conciliatory, for their own good. However much they may despise Putin, the alternative is potential chaos and confrontation.

So the time may have come to make a deal over the future of Ukraine, one couched in the language of a “grand accord.”

The most obvious key concessions would allow Russia to keep Crimea and to provide financial assistance to Russia. In exchange, Putin would agree to demilitarize Eastern Ukraine and implement some domestic financial reforms.

Letting Putin save face, even claim victory, may not suit the Ukrainians. But I would argue that it is better than any alternative – and avoids the increasing specter of roiled global markets. Otherwise, the Russian doll inside Putin may be Stalin, not Gorbachev. 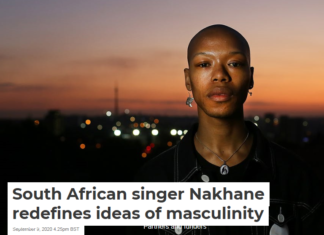 Staff Writer - September 23, 2020
Gibson Ncube, University of Zimbabwe The clichéd adage “boys will be boys” has, over the ages, normalised unbecoming behaviours. It has also socialised young men...

Distance learning makes it harder for kids to exercise, especially in...

How a journalism class is teaching middle schoolers to fight fake...