Scientists these days face a conundrum. As Americans are buffeted by accounts of fake news, alternative facts and deceptive social media campaigns, how can researchers and their scientific expertise contribute meaningfully to the conversation?

There is a common perception that science is a matter of hard facts and that it can and should remain insulated from the social and political interests that permeate the rest of society. Nevertheless, many historians, philosophers and sociologists who study the practice of science have come to the conclusion that trying to kick values out of science risks throwing the baby out with the bathwater.

Ethical and social values – like the desire to promote economic development, public health or environmental protection – often play integral roles in scientific research. By acknowledging this, scientists might seem to give away their authority as a defense against the flood of misleading, inaccurate information that surrounds us. But I argue in my book “A Tapestry of Values: An Introduction to Values in Science” that if scientists take appropriate steps to manage and communicate about their values, they can promote a more realistic view of science as both value-laden and reliable.

Values can be good or bad

There is no question, of course, that values can cause problems in science. Powerful organizations like the tobacco and lead industries have manipulated science to boost their profit margins and prevent regulation of their products. The fossil fuel industry has engaged in similar tactics to spread misinformation about climate change.

And it’s not just big business that spreads misleading science – many different groups peddle questionable claims about everything from vaccines and alternative medicines to genetically modified foods and diet strategies. In these cases, economic values or ideological commitments have inclined people to ignore or suppress evidence that runs counter to their preferences.

But I’d argue that it would be a grave mistake to try to eliminate all value considerations from scientific research. At the very least, most people want scientists to respect human rights and animal welfare when they design potentially harmful experiments.

We as citizens also want scientists to keep social priorities in mind when deciding what research projects to undertake. In part, this involves choosing among an array of possible topics – for example, deciding how to divide up medical research investments among cancer, AIDS, diabetes and mental health.

It also involves deciding how scientists study these topics. Should they focus more attention on preventing environmentally induced cancers? Or treating cancers that are already present? How much money should go toward developing new drugs for treating depression as opposed to studying how to mitigate some cases by modifying diet, exercise or the social environment? Social values are obviously relevant to making these judgments.

Between hard facts and unfounded advocacy

A great deal of science is now performed in an effort to inform policymakers who need to make practical decisions about real-world problems such as regulating industrial chemicals or managing wildlife populations or preventing disease outbreaks. This sort of research can be plagued by uncertainties; there’s almost never one clear-cut “right” answer.

In these research contexts, scientists must decide how to extrapolate beyond the available data and weigh complex bodies of evidence in order to help policymakers draw conclusions. Values have a role to play in making these decisions. If one errs in one direction, one often risks overregulation and economic losses. Err the other way, and public health and environmental resources are often at stake. It makes sense to think about these consequences when deciding which way to lean.

Even the language employed by scientists is often laden with values. For example, environmental scientists have debated the merits of talking about “invasive,” “nonnative,” “exotic” or “alien” species, given that these are metaphorical terms that have great significance in contemporary social and political debates. In biomedical research, scientists have struggled to decide whether the benefits of employing racial categories outweigh the dangers of promoting misleading notions about race as a biological phenomenon. And the World Health Organization suggested in 2015 that scientists should stop using disease names like swine flu, athlete’s foot or Marburg disease, because they could stigmatize animals, people or places. In cases like these, there may be no strictly value-neutral ways of categorizing and describing phenomena.

Even if we cannot turn science into a value-free endeavor, researchers can still take important steps to preserve its legitimacy. One way to do that is for the scientific community to promote as much transparency in science as possible so that the influences of values can be recognized. Depending on the context, this can involve many different activities: consistently publishing results, using open-access journals, making data publicly available, providing data analysis plans before studies begin, making materials and methods available to other researchers and disclosing conflicts of interest.

Both citizens and scientists also need to scrutinize and discuss the influences of values as effectively as possible, using many different venues: Journals can promote thoughtful peer-review processes, government agencies can maintain effective science advisory boards, scientific societies can create reports on debated topics, citizens can get involved in research projects and the scientific community can encourage new perspectives by promoting greater diversity in its membership. By taking these steps, scientists and stakeholders can decide how best to handle important judgments, and they can distinguish scientific conclusions that are well supported from those that are more tenuous.

By virtue of the fact that science is done by and for human beings, values are entangled in the enterprise whether we acknowledge it or not. Rather than dismissing scientists who discuss their values, we ought to encourage scientists and other stakeholders to engage in open, thoughtful reflection about how values influence research. Far from threatening the integrity of science, this is the path to promoting science that is trustworthy and socially responsible. 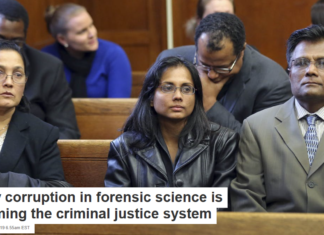 How corruption in forensic science is harming the criminal justice system

‘I got there first!’ How your subjective experience of time makes...