The term “reboot” means something particular in the movies. The metaphor is drawn from computers: a “reboot” restarts a machine whose software has malfunctioned. But in cinematic terms a reboot refers to a particular sort of revision of familiar properties. Characters who have grown tired and typical and situations that have become predictable and self-referential are reimagined in a bolder, more believable style.

Ridley Scott’s new film Exodus: Gods and Kings is another. In this case, Scott makes Cecil B. DeMille’s Technicolor spectacle The Ten Commandments, released in 1956, grittier and more plausible. To audiences today, the acting in DeMille’s epic seems bombastic, while the special effects appear naïve and literal. The hero Moses (Charleton Heston) is presented as a man facing straightforward choices between right and wrong, who never doubted his mission.

With arms spread wide, Heston’s Moses orders the Red Sea to part before him. “The Lord of Hosts will do battle for us!” he cries. “Behold His mighty hand!”

The film was not exactly subtle.

In contrast, Scott’s revision contains more ambiguity. Moses (Christian Bale) is caught by surprise as much as anyone when the waves begin to pull back from the rocky shores of the Red Sea. Here, the parting acknowledges present day speculations that unusual tidal, meteorological, or seismic circumstances could have created a temporary land bridge across a shallow section of sea.

Indeed, removing magic from the miraculous is Scott’s rebooting strategy. Unlike DeMille, who used special effects to show magical violations of natural laws, like the parting of the seas, Scott marshals his extensive digital manipulations mostly to increase the scale of natural events. Miraculous here means huge and spectacular, not supernatural; the ten plagues are rendered as ecological and climatological disasters, not demonstrations of Moses’s direct power over nature.

But in making Exodus more natural and Moses more believable, Scott’s reboot raises interesting theological questions. How does this strange and violent story fit into our own moral universe?

In The Ten Commandments, this wasn’t a problem. Despite its biblical trappings, DeMille’s movie was not asking questions of faith. Its “message” was political – a distinctly mid-twentieth-century American version of politics at the height of the Cold War. The conflict between Moses and Yul Brynner’s Rameses was “the story of the birth of freedom,” DeMille informs us in a prologue.

His film poses the question: “Are men the property of the state, or are they free souls under God?”

Exodus is a story of political freedom, of course, which is why it has inspired so many people who have struggled against oppression. But it is also a story of God destroying an entire society. In DeMille’s version of Exodus, these two aspects are in harmony. God and Moses visit the plagues on Egypt because that is the only way to free the Israelites from bondage.

In Scott’s movie, on the other hand, Moses is first shown organizing the Israelites into a resistance movement. But God grows impatient with this strategy, and tells Moses to stand aside while He batters the Egyptians with frogs, flies, blood, boils, etc. – before eventually killing the eldest child in every Egyptian family.

Moses himself refuses to take responsibility for this cruelty, questioning God and telling Ramses (Joel Edgerton) that these events are out of his control. Here, God’s intervention in history is shown as an alternative to political organization.

In The Ten Commandments, the end – political freedom – was shown to justify the means (divine plagues). In Exodus: Gods and Kings, the plagues are so spectacular and the Egyptian suffering so real that we must wonder, along with Moses, whether such means – in particular the killing of innocent children – could ever be justified. Like the tidal wave on the movie poster, this God is naturally powerful but morally inscrutable.

Scott’s movie is dedicated to his brother and professional partner, the director Tony Scott, who committed suicide in August of 2012. No doubt the incomprehensibility of such a desperate act informs Scott’s depiction of God as ethically baffling.

But beyond this personal motivation, Scott’s movie captures something real about religion in the contemporary world. God seems to reveal Himself most clearly in catastrophic “acts of God” that interrupt human purposes. The Greek word for this kind of “revelation,” where God and the world are absolutely opposed, is “apocalypse.”

Scott has given us a Moses for our times – a Moses whose God is not a comprehensible law giver and emancipator but an incomprehensible judge and destroyer. Call it the ultimate reboot, a reboot of all creation. 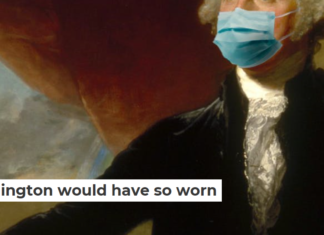 Staff Writer - June 1, 2020
Maurizio Valsania, Università di Torino The genre “What would X do?” – where X stands for a noted figure in history, say Jesus or Dolly...

3 reasons why we are addicted to smartphones