The federal government just made it a lot easier to form an employee-owned business.

In an increasingly rare example of bipartisan cooperation, President Donald Trump on Aug. 13 signed a defense bill into law that included a popular provision that allows the Small Business Administration to straightforwardly loan money to employee-owned businesses that wish to buy out retiring small business owners.

This and other changes in the provisions are significant. Not only could they double or even triple the growth rate of employee-owned companies over the next decade, we expect they will help stabilize jobs in local communities as well as reduce inequality by giving more middle-class families a means of accumulating wealth.

Furthermore, this measure – which we supported with research and analysis – will be a boon to the hundreds of thousands of small businesses owned by retiring baby boomers that are at risk of closing up, putting millions of jobs on the line as well.

The impetus behind the latest piece of legislation is a result of what some have dubbed the “silver tsunami.”

As baby boomers retire, more than 2.3 million closely held businesses that they own are at risk of closing down because of an inability to find someone to take over. These companies employ about 25 million people, spend about US$1 trillion on payroll a year and make about $5 trillion in sales.

While some of these businesses will be passed down to members of the family or others, about 6 out of 10 are expected to wind up on the auction block in the next decade because the owners need to sell out in order to retire.

We believe this will represent one of the largest transfers of wealth in American history.

Workers to the rescue

Surveys show that only a small fraction of retiring owners have a daughter or son who wants to take over the company and is competent to do so, and only a fifth of businesses listed for sale ever sell.

That makes selling their businesses to the workers who helped create all the value in the first place one of the best options available. It not only helps secure the owner’s retirement but also leaves behind a legacy in the local community. It has also slowly become more popular in recent decades.

Small businesses are sold to their managers or workers using one of three methods: an employee stock ownership plan or ESOP, a worker cooperative or an employee trust.

The ESOP, created in 1956 by the late political economist Louis O. Kelso, is currently the most common way to do this because it gives regular workers a way to buy companies and has meaningful federal tax incentives. This allows the new owners to set up a trust, which secures a loan that the company itself will pay back over several years.

A key feature is that the company, not the workers, steps forward to provide the collateral for the loan, and as the loan is paid down, new shares are distributed to employees and managers. The workers do not purchase the shares with their savings.

Worker cooperatives, on the other hand, have traditionally been employee-owned from the beginning, with investments from staff and equal voting rights in many company decisions. Increasingly, the worker coop model is being used to purchase companies from retiring business owners.

Employee trusts are a new form of ownership, similar to ESOPs in some ways. Their goal is to ensure a company remains employee-owned in perpetuity by keeping the shares within the trust itself. The employees are beneficiaries of the trust, receiving payouts based on profits.

We have spent the last 35 years researching this phenomenon and pulling together all the empirical studies that have been done to assess the impact, which we explore in our books, “The Citizen’s Share” and “Shared Capitalism at Work.” The evidence shows that employee ownership tends to make companies more productive and stable.

As for their prevalence, based on our recent calculations of all of the 2014 U.S. Department of Labor data on ESOPs, we found that about 2 million workers and managers were invested in about 5,800 closely held companies with the total employee ownership valued at $255 billion. While the average ESOP worker in these companies has an ownership stake of $134,000, our calculations are this is close to a quarter of a million dollars for workers who stay with the company for 20 years.

Unfortunately, many business owners aren’t aware this is even an option.

And that’s where the new law comes in.

The provision, previously known as the Main Street Employee Ownership Act, was written by Democratic Sen. Kirsten Gillibrand and had co-sponsors on both sides of the political aisle. It is the most far-reaching employee share ownership legislation to pass Congress in over 20 years.

Its most important element involves permitting the SBA to clear away many previous barriers so it can make guaranteed loans of up to $5 million to employee-owned businesses, especially ESOPS and worker cooperatives. This will make employee buyouts easier to do by significantly expanding the amount of credit available and will create more flexibility for sellers so that they can transition out of their businesses over a few years.

The law also tasks the SBA with providing more awareness, technical assistance and training both to the small business owners who might be interested in selling to their employees and to the workers themselves.

We’ve observed that past efforts to encourage employee ownership by the federal government led to large growth spurts, such as laws passed 30 and 20 years ago that offered tax incentives. That’s why we would estimate the latest measure to double or even triple the growth of employee-owned companies.

The legislation’s impact could be far-reaching.

If it’s successful in leading more small business owners to sell to employees, it could help reduce economic inequality. That’s because the primary beneficiaries would be working- and middle-class employees who would suddenly have a new way to build a substantial amount of capital.

Furthermore, it’ll help preserve local jobs and the tax base because as we noted these small businesses often end up closing down because there’s no one to take over. In addition, employee-owned companies have shown greater resiliency in times of economic stress, leading to fewer layoffs. And research shows that these types of companies offer better pay and benefits than other types of businesses.

With real wages for most Americans flat or declining and most wealth in the hands of the richest Americans, broadening capital ownership to the middle and working classes may be the best – and perhaps the only – bipartisan road left to addressing economic inequality in the U.S. 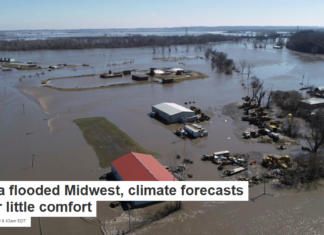 Staff Writer - March 29, 2019
Shuang-Ye Wu, University of Dayton Flooding in the Midwest, triggered by an intense “bomb cyclone,” has devastated parts of the region, which has been plagued...

Does ignoring robocalls make them stop? Here’s what we learned from...