Zambia, a country in southeast Africa, has approximately 1,200 lions, one of the largest lion populations on the continent. More than 40% of the U-shaped country is protected land, with over 120,000 square miles of national parks, sanctuaries and game management areas for lions to roam.

Zambian lions are split into two subpopulations, with one in the Greater Kafue Ecosystem in the west and the other in the Luangwa Valley Ecosystem in the east. Between these two geographically different regions lies Lusaka, Zambia’s largest city, which is surrounded by farmland.

People had assumed that the two groups of lions did not – even could not – mix. After all, they’re separated by a geographical barrier: the two regions feature different habitats, with the east an offshoot of the Great Rift Valley system and the west part of the southern savannas. The lions are also separated by what’s called an anthropogenic barrier: a big city that lacks wildlife protection, making it seemingly unsuitable for lions.

So my colleagues and I were surprised when we found that a small number of lions are in fact moving across the area in between presumed to be uninhabitable by lions. These sneaky lions – and their mating habits – are causing the high levels of genetic diversity we found in the entire Zambian lion population.

Identifying which genes are where

Working with the Zambian Wildlife Authority, biologist Paula White collected hundreds of biological samples from lions across Zambia between 2004 and 2012. Eventually a box of this hair, skin, bone and tissue, meticulously packaged and labeled with collection notes and sampling locations, arrived at my lab at Texas A&M University.

Our goal was to investigate genetic diversity and the movement of various genes across Zambia by extracting and analyzing DNA from the lion samples.

My mitochondrial analysis verified that, genetically, there are two isolated subpopulations of lions in Zambia, one in the east and one in the west. However, by also looking at the nuclear genes, we found evidence that small numbers of lions are moving across the “unsuitable” habitat. Including nuclear genes provided a more complex picture that tells us not only which lions were moving but also where.

Genes on the move as lions roam

To a geneticist, migration, also referred to as gene flow, is the movement of genes from one geographical place to another. Mitochondrial DNA, inherited from the mother, can only tell researchers where genes from mom have been.

In the lion mating system, males travel long distances to find new prides, while females remain in or close to the pride they were born in. So, for the lion, it’s primarily males that are responsible for the movement of genes between prides. This male-mediated gene flow explains the lack of gene flow seen in mitochondrial genes compared to that of nuclear genes – female lions aren’t making the journey, but they do mate with new males who come from far away.

Lions are most likely traveling a route between the Lower Zambezi National Park and eastern corridor to the Kafue National Park in the west, possibly along the Kafue River. We can’t tell which way they’re moving, but by looking at where lions are more closely related, we can see where genes are being moved.

Human-lion conflict is a big issue in Zambia, particularly outside of protected land. If lions were moving across human dominated areas, you’d think they’d be seen and reported. But these lions are sneaking through virtually undetected – until we look at their genes.

As a large, charismatic carnivore, lion research and conservation influences many other species that share their habitat.

Wildlife managers can use these findings to help with lion conservation and other wildlife management in and around Zambia. Now that we generally know where lions are moving, managers can focus on these areas to find the actual route the big cats are taking and work to maintain or even increase how many lions can move across these areas. One of the ways of doing this is by creating more protected land, like corridors, to better connect suitable habitat. 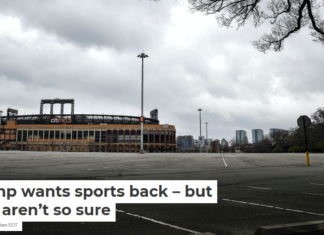 Staff Writer - April 20, 2020
Murray Edelman, Seton Hall University CC BY-NDSome politicians, media figures and business leaders are clamoring for sectors of the economy to re-open in the near...