Climate models can recreate the slowdown in global warming since 1998, as long as they correctly factor in crucial variables such as the state of the El Niño system, new research has shown.

The discovery vindicates the models against the accusation that they failed to predict the “alleged hiatus” in surface warming, says CSIRO researcher James Risbey, who led the study.

In the study, published in Nature Climate Change, Risbey and his colleagues looked at a set of 18 climate models featuring data on the Pacific Decadal Oscillation (PDO) – the seesawing temperature pattern that determines whether a given period is dominated by El Niño or La Niña conditions.

They then looked only at those models whose PDO settings matched those in the real world, and found that these models gave a much more accurate reconstruction of temperature trends – including the slowdown in warming seen over the past decade and a half.

The discovery shows that El Niño has a strong influence on temperature trends over relatively short timescales such as 15 years, Risbey said.

Because Pacific temperature patterns flip back and forth every few decades, not all climate models reflect the real-world state of El Niño at a given time. That means that, when many models are averaged together, climate models have tended to overestimate the rate of post-1998 warming.

Choosing only those ones with accurate settings for Pacific Ocean temperatures for each 15-year period meant they did a better job of recreating temperature trends during those periods, Risbey explained.

But for longer-term projections, such as the expected warming by the end of the century, this approach will not work because the dominant influence on temperature will be greenhouse gases, rather than natural cycles such as El Niño.

“If you want to do a forecast for next year then you can neglect the forcing, meaning the change in greenhouse gases, because greenhouse gases hardly change the climate from this year to next year relative to natural variations,” he said.

“But over 100 years, it doesn’t really matter what phase of PDO we’re in – whether it’s El Niño-dominated or La Niña-dominated. The main thing that’s going to determine where our temperatures are in 100 years time is going to be the response to the forcing: the greenhouse bit.”

University of Tasmania climate modeller Stuart Corney pointed out that temperature records are still being broken, despite temperatures having risen more slowly than expected.

“Remember that the first decade of the 21st century was the warmest decade on record. The decade of slowdown has still seen the warmest years on record, with 2005 and 2010 both hotter than 1998,” he said.

The study also highlights the difference between climate “forecasts” and longer-term climate “projections”.

“Projections are essential for giving us information on long-term trends, but the timescale is beyond what many policy makers (and the public) consider to be relevant to their decision-making processes. Climate forecasts seek to address this issue by providing information on a shorter term (decadal) that can be used directly to inform policy,” he said.

“As climate forecasts improve, they will become more and more important in providing reliable information on what is likely to happen to the climate over the next decade. This paper by Risbey et al demonstrates a new technique for developing climate forecasts.

“In many ways we may have been lucky over the past 15 years, as temperatures have not risen as dramatically as expected due to being in a period of less intense El Niños. To some extent the long term climate change signal will have to ‘catch up’ as it has been lagging behind our best projections for over a decade now. This suggests significant warming (and other associated changes, such as drought in Eastern Australia) when this occurs.”

“This work confirms the idea that decadal variability in the El Niño cycle
has a major impact on globally averaged surface air temperatures.

“The past 15 years have seen a relatively large number of La Niña events
compared to El Niños. This cools the east Pacific and drives a strengthening
of the trade winds, which leads to enhanced heat uptake in the western
Pacific Ocean. Extra ocean heat uptake means less heat in the atmosphere,
and a slowdown in surface warming is the result.

“But it’s important to point out that this decadal variability in the Pacific will swing around again at some stage, and when it does we expect accelerated
surface warming to occur.” 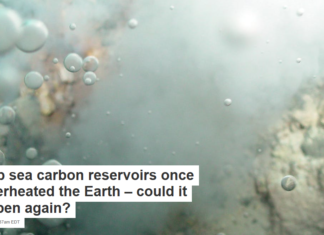 Staff Writer - May 9, 2019
Lowell D. Stott, University of Southern California As concern grows over human-induced climate change, many scientists are looking back through Earth’s history to events that...

People are increasingly interrupted at work, but it’s not all bad

Where were you when the mountain blew? Remembering the eruption of...