Police have yet to confirm what caused a driver to plow a red SUV into a Christmas parade in Waukesha, Wisconsin, on Nov. 21, 2021, killing at least five people and injuring scores more. But one thing is clear: Vehicles can be a deadly weapon, whether used deliberately or unintentionally.

The suspect, identified as Darrell Brooks Jr., is expected to face charges including five counts of intentional homicide. It has emerged that Brooks was previously arrested earlier in November after being accused of hitting the mother of child with his car in a gas station parking lot. Waukesha police confirmed on Nov. 22, that the latest incident, which left 18 children between the ages of 3 and 16 in hospital, was not an act of terrorism. Nor did it follow a police pursuit, although reports suggest that the suspect may have been fleeing an earlier incident.

But the manner of the deaths conjures up recent memories of terror attacks using vehicles on perceived soft targets, such as holiday markets, as well as concern over the risk of high-speed chases ending in tragedy.

As a scholar who has researched the weaponizing of vehicles, I know that cars, SUVs and trucks can be an efficient means of mass killing, and one that can be virtually impossible to prepare against. Furthermore, it is becoming harder to prosecute the driver involved in such fatalities in some states.

Vehicle ramming – defined by the Department of Homeland Security as the deliberate aiming of a motor vehicle at individuals with the intent to inflict fatal injuries or cause significant property damage – has been called the “poor man’s weapon of mass destruction.”

Members of the terrorist group Islamic State were not the first to employ this deadly innovation – in attacks on people in London, Nice and New York – but in recent years they have perhaps become most closely associated with the tactic.

The group featured “vehicle ramming” in their propaganda as one of their preferred weapons against Western targets and encouraged supporters to use vehicle ramming against crowds. Islamic State group propaganda magazine, Dabiq, even advised would-be lone actors which vehicle could do the most damage

In North America, white supremacists and other militant and terrorist groups have also rammed their vehicles into crowds. Incidents of people running vehicles into pedestrians include that of the violent “incel” – or “involuntary celibate” – Alek Minassian, who rammed his van into a crowd in Toronto in 2018, killing 10. It has also been employed by members of the far-right, such as James Fields, who was found guilty of the murder, by vehicle, of Heather Heyer at the Unite the Right rally in Charlottesville, Virginia, in 2017.

After the protests following the police killing of George Floyd, there was a massive uptick in the number of attacks, most of which were aimed at Black Lives Matter protests. From the day of Floyd’s death on May 25, 2020, to Sept. 30, 2021, vehicles drove into protests at least 139 times, according to a Boston Globe analysis.

During the course of my Department of Defense-sponsored research on how militant and terrorist groups’ use social media, I observed extreme right-wing groups on social media platforms such as Facebook, Twitter, Parler and Telegram sharing memes about the vehicular attacks in the summer of 2020. Posts minimized the civilian casualties and mocked the core message of “Black Lives Matter,” turning it into the grotesque slogan “All Lives Splatter” and featuring a white SUV covered in red paint on the hood.

And it isn’t only right-wing groups that have targeted protesters. Police in cities such as New York and Detroit have driven vehicles into demonstrations. And in Tacoma, Washington, at least one man was injured after an officer drove into a crowd of protesters. In Boston last year, Police Sergeant Clifton McHale was recorded on a police body camera bragging about hitting protesters with his police cruiser.

In recent months, five states – Arkansas, Florida, Iowa, Oklahoma and Tennessee – have either shielded drivers who kill pedestrians from legal action or have fully decriminalized hitting a pedestrian with a vehicle if they were in the street or on a highway. Legislatures in states like Iowa, Florida and Oklahoma have passed laws granting drivers criminal and civil immunity if they “unintentionally” hit or kill a protester while “fleeing from a riot,” so long as they say it was necessary to protect themselves. Kansas, Montana, and Alabama are planning similar legislation.

Many more Americans are unintentionally killed or injured as a result of high-speed pursuits involving law enforcement. Police chases often occur on public roads or in residential areas. The result of what can be multiple vehicles going at high speeds in these areas can be deadly. The Department of Transportation estimates that around 250,000 high-speed police chases occur every year, with 6,000 to 8,000 of them resulting in a collision.

Around 500 people are killed annually as a result of these police pursuits, and approximately 5,000 are injured. The Justice Department, recognizing the danger of high-speed chases, has urged police officers to avoid or abort pursuits that endanger pedestrians, motorists or the officers themselves.

The risk to the public of a driver intentionally or unintentionally causing a mass casualty event is, as the Wisconsin case shows, just too high. 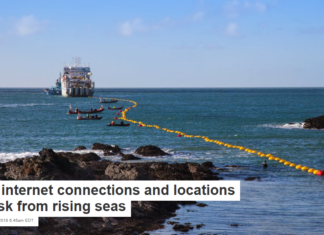 Staff Writer - September 8, 2018
Carol Barford, University of Wisconsin-Madison Despite whimsical ads about computing “in the cloud,” the internet lives on the ground. Data centers are built on land,...

Airline policies mandating vaccines will be a turbulent test of workplace...

Nobel Peace Prize for journalists serves as reminder that freedom of...