Imagine an old-growth forest in the fading light of a summer evening. As the last of the sun’s rays disappear beneath the horizon, a tiny flash catches your eye.

You turn around, hold your breath; it blinks again, hovering 2 feet above the leaf litter. Across the dusky glade, a fleeting response. Then another one, and another, and within minutes flickering fireflies spread all over the quiet woods.

At first they seem disorganized. But soon a few coordinated pairs appear, little tandems flashing on the same tempo twice a second. Pairs coalesce into triads, quintuplets, and suddenly the entire forest is pulsating with a common, glittering beat. The swarm has reached synchrony. https://www.youtube.com/embed/_pwXKKaSJ58?wmode=transparent&start=0 Fireflies at Congaree National Park flash in unison. Video by Mac Stone

Firefly congregations are sprawling speed-dating events. Flashes convey a courtship dialogue between advertising males and selective females. Shaped by the interplay of competition and cooperation among thousands of fireflies in interaction, collective light patterns emerge, twinkling analogs to the murmurations of bird flocks swooping together. The mystifying phenomenon of some fireflies’ flash synchronization has puzzled scientists for over a century.

Synchrony is ubiquitous throughout the universe, from electron clouds to biological cycles and planetary orbits. But synchrony is a complex concept with many ramifications. It encompasses various shapes and forms, usually revealed by mathematics and later explored in nature.

Take the firefly swarm. Wait a little longer and among the illuminated chorus, something else appears: Some discordant flashers secede and continue off-beat. They blink at the same pace but keep a resolute delay with their conformist peers. Could this be evidence of a phenomenon predicted by mathematical equations but never seen in nature before?

Synchrony, with a twist

Twenty years ago, while digging deeper into the equations that form the framework of synchrony, physicists Dorjsuren Battogtokh and Yoshiki Kuramoto noticed something peculiar. Under specific circumstances, their mathematical solutions would describe an ambivalent ensemble, showing widespread synchrony interspersed with some erratic, free-floating constituents.

Their model relied on a collection of abstract clocks, called oscillators, that have a tendency to align with their neighbors. The nonuniform state was surprising, because the equations assumed all oscillators were perfectly identical and similarly connected to others.

Spontaneous breaking of underlying symmetry is something that typically bothers physicists. We cherish the idea that some order in the fabric of a system should translate into similar order in its large-scale dynamics. If oscillators are indistinguishable, they should either all get in sync, or all remain chaotic – not show differentiated behaviors.

It piqued the curiosity of many, including mathematicians Daniel Abrams and Steven Strogatz, who named the phenomenon “chimera.” In Greek mythology, the Chimera was a hybrid monster made of parts of incongruous animals – so a fitting name for a hodgepodge of mismatched clusters of oscillators.

At first, chimeras were rare in mathematical models, requiring a very specific set of parameters to materialize. Over time, learning where to scout, theorists began to uncover them in many variations of these models, dubbing them “breathing,” “twisted,” “multiheaded” and other eerie epithets. Still, it remained mysterious whether these theoretical chimeras were also possible in the physical world  – or merely a mathematical myth.

A decade later, a few ingenious experiments set up in physics laboratories yielded the elusive chimeras. They involved finely tuned networks of interactions between sophisticated oscillators. While proving that engineering the coexistence of coherence and incoherence was a delicate, but possible, venture, they left the deeper question unanswered: Could mathematical chimeras also exist within the natural world?

It turned out it would take a tiny luminescent insect to shed light on them.

Chimera amid the fireflies’ blinking chorus

As a postdoc in the Peleg Lab at the University of Colorado, I work on deciphering the inner workings of firefly swarms. Our approach builds on the foundations of a little-known niche within modern physics: animal collective behavior. Simply put, the overarching objective is to reveal and characterize spontaneous, unsupervised large-scale patterns in the dynamics of groups of animals. We then investigate how these self-organized patterns emerge from individual interactions.

Advised by knowledgeable firefly experts, my colleagues and I drove across the country to Congaree National Park in South Carolina to chase Photuris frontalis, one of few North American species known to synchronize. We set up our cameras in a small forest clearing among the loblolly pines. Soon after the first flickers poked through the twilight, we observed a very rhythmic, precise synchrony, apparently as clean as predicted by equations.

This was an enchanting experience, yet one that left me reflective. I worried that this display was too orderly to let us infer anything from it. Physicists learn about things by looking at their natural fluctuations. Here, there seemed to be little variability to investigate.

Synchrony manifests itself in the data in the form of sharp spikes in the graph of the number of flashes over time. These peaks indicate that most flashes occur at the same instant. When they don’t, the trace looks irregular, like scribbles. In our plots, I first saw nothing but the flawless comblike pattern of impeccable synchrony.

It turned out the chimera was hiding in plain sight, but I had to roam further along the data to encounter it. There, in between the spikes of the light chorus, some shorter peaks indicated smaller factions in sync among themselves but not with the main group. I called them “characters.” Together with the synchronized chorus, these incongruous characters make up the chimera.

Like in the ancient Greek theater, the chorus sets the background while characters create the action. The two groups are intertwined, roaming the same stage, as we revealed from the three-dimensional reconstruction of the swarm. Despite the split in their rhythm, their spatial dynamics appear indistinguishable. Characters don’t seem to congregate or follow one another.

This unexpectedly intermingled self-organization raises even more questions. Do characters among the swarm consciously decide to break away, maybe to signal their emancipation? Or do they spontaneously find themselves trapped off-beat? Can mathematical insights enlighten the social dynamics at play among luminous beetles?

Unlike abstract oscillators in math equations, fireflies are cognitive beings. They incorporate complex sensory information and process it through a decision-making pipeline. They are also constantly in motion, forming and breaking visual bonds with their peers. Streamlined mathematical models don’t yet capture these intricacies.

In the quiet woods, the synchronized flashes and their dissonant counterparts may have illuminated a trove of new chimeras for mathematicians and physicists to chase. 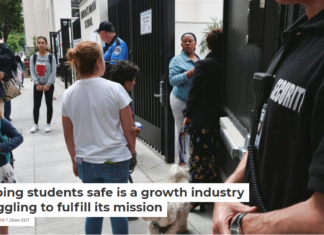 Keeping students safe is a growth industry struggling to fulfill its...