A few weeks ago I was visiting a colleague in Brazil who told me he had a new post-doctoral researcher working for him from West Africa, but that he was in 21 days quarantine. I asked him if the newest member of his staff was in the university’s hospital; he replied “no”, he is wandering around the streets of the city until his 21 days are up – he is just not allowed on the campus.

As disease researchers know the great problem of the modern era is transport: since the times of our great-grandfathers human ability to traverse the planet has increased exponentially. And the risk of disease epidemics such as Ebola has followed.

The present Ebola crisis appears, like HIV before it, to have started with the disease jumping from a wild species, in this case bats, to humans. Ebola and bats have been battling out an evolutionary war for thousands of years and have more or less come to a stalemate whereby bats are infected and the virus can reproduce itself, but bats are not killed. A similar situation is seen in the case of simian retroviruses (SIV), the precursors of HIV. Both come about from the arms race that occurs between a disease and its host: if lions start to run faster then so do their prey, otherwise the prey and ultimately the lion will go to extinction. These wars between diseases and their hosts can be found everywhere on the planet.

But what about the native people who live in forests? Surely they have been fighting this same evolutionary arms race with these same diseases. The answer is perhaps not. Studies of the Ache tribe of hunter gathers in Paraguay show that they do not hunt species indiscriminately. While their jungle home contains thousands of potential animal species to consume, they basically focus on eating only 12. The items on their menu are selected in terms of their energetic profitability; that is, the minimum amount of search time for the maximum amount of calories. In this case the favoured food item is the armadillo.

Historically hunter gather tribes were small and widely dispersed. Thus, if they did get Ebola everyone might have died but there would have been little transmission to other groups of humans – and no epidemic. Agriculture changes everything, as large well-connected groups can easily transmit diseases.

It is also worth remembering that diseases can jump the species barrier in both directions. About five years ago in the Brazilian city of Belo Horizonte all of the wild urban marmosets in one area died out due to cold sore infections. Cold sores are caused by a herpes virus. This outbreak probably started unintentionally when a person with a cold sore gave a fruit they were eating to some marmosets. Disease transmission is very much a two-way street and there is increasing evidence of human diseases passing on to wildlife, especially primates.

Wild animals hunted and eaten in tropical forests are known as bushmeat – and bushmeat represents a crisis of its own, as hunting threatens to make many species of wildlife extinct. The crisis has its origins in poverty. People simply need to eat animals to survive, a situation that is made worse by deforestation and the fragmentation of natural habitats.

There is the often romanticised view of native peoples as conservationists since they are generally not thought to have made animal species go extinct. But this situation is more to do with their limited technology and small populations relative to their environment, rather than because native people live in an ecologically friendly manner. As their traditional forests are hit, and the easy pickings dry up, eventually the menu of such people will need to include new less energetically profitable food. And access to technology such as firearms can make previously unattainable prey available.

Much of the modern bushmeat trade is no longer connected to native people needing to exploit wildlife as a food resource, but the descendants of these people who have developed a taste for the food. It is for this reason that several hundred tonnes of bushmeat enter Europe each year, where its illegality has made it a status symbol in some sections of society.

Part of the problem with this trade in bushmeat is that judges in the countries where the hunting takes place often, naïvely, believe the hunter’s pleas of poverty and just “smack them on the wrists”. Research in the north-east of Brazil has proven conclusively that hunting birds for food is much more expensive than buying chicken from the supermarket. Humans spent the past few thousand years breeding chickens, cows and pigs for a reason: they make a nicer, cheaper and less dangerous dinner than bats, gorillas or armadillos.

Unfortunately, the threat of picking up a dreadful disease from bushmeat may not save these animals from extinction. A few years ago there was a yellow fever outbreak in Brazil and it was announced on the television that monkeys can be a host for this disease: this lead to the killing of wild urban primates in some cities. If humans continue to increase the items on their bushmeat menu then we can expect more diseases like Ebola and HIV to appear. 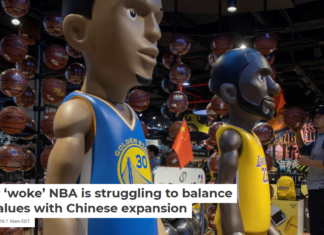 Staff Writer - October 15, 2019
Mary-Hunter McDonnell, University of Pennsylvania It’s not easy being a for-profit organization these days. Take the National Basketball Association. It found itself in a tricky situation...

Don’t expect the coronavirus epidemic in the US to bring down...

Statistics can kill: how Ebola treatment is being slowed by the...