Over the past year, politicians on the right have railed against the supposed tyranny of political correctness.

Perhaps it’s fitting, then, that as 2016 draws to a close, arguably the most obscene and offensive work of fiction ever written – a work that claims to “say everything” – is going to be sold in America as a mainstream classic for the first time. My new translation of the Marquis de Sade’s “The 120 Days of Sodom” with Thomas Wynn is the first in 60 years.

In 1785, the Marquis de Sade wrote “The 120 Days of Sodom” in his cell in the Bastille in 37 days. At this point in his life, he had spent eight years in prison. He had also been burned in effigy, survived attempted murder and lived for months on the run as an outlaw after a series of scandals with prostitutes. “The 120 Days” was his first – albeit incomplete – attempt at a novel.

The story goes something like this: Four debauched aristocrats shut themselves away in an isolated castle with a retinue ranging from teenage boys and girls to old crones. Over the course of four months, experienced prostitutes recount 600 “passions” or perversions. It’s a case of “monkey hear, monkey do” as the four men, surrounded by their prisoners, act out each of the “passions.”

For all his notoriety, the man whose name inspired the word “sadism” has always been an author more talked about than read – at least, in French.

In English, however, it’s quite a different story. Earlier this year, for example, I discovered that several of his short stories, and the opening chapters of one of his novels, were translated and published anonymously in popular Victorian periodicals such as “The London Pioneer” and “The Bon Ton Gazette” – a case of Sade being read by tens of thousands of readers without being talked about at all. In the 20th century, too, Sade was read in far greater numbers in English than he ever managed in French, thanks largely to the efforts of successive generations of American translators and publishers.

The reception of Sade in the English-speaking world is really a tale of two cities, Paris and New York.

Austryn Wainhouse, a young doctoral student on leave from the University of Iowa, spent the 1950s in Paris translating most of Sade’s major works into English for the Paris-based Olympia Press (which also published Vladimir Nabokov’s “Lolita” in 1955). While Sade’s French publisher, Jean-Jacques Pauvert, was prosecuted in 1956 after putting his name to an edition of Sade’s major works, Olympia was publishing the same works in far greater numbers with relative impunity. As far as the French government was concerned, obscenity was fine, as long as it wasn’t in French.

Meanwhile, in New York, Grove Press tested the American market in 1953 with a volume that combined an essay by Simone de Beauvoir with a (very) careful selection of passages from Sade. Any words or phrases that might be deemed objectionable were left in French. As far as the Grove Press lawyer was concerned, obscenity was fine, as long as it wasn’t in English.

While Olympia’s Sade editions were evading customs officials and traveling the world, Barney Rosset, the owner of Grove Press, decided to challenge the very obscenity laws that were preventing their entry into the United States.

Over the course of a few years, he published three novels – “Lady Chatterley’s Lover” (1959), Henry Miller’s “Tropic of Cancer” (1961) and William Burroughs’ “Naked Lunch” (1962) – that triggered a flurry of court battles and ultimately ended censorship of the printed word in America. As Charles Rembar, one of the Grove Press lawyers, would later say, the publisher’s long legal campaign ultimately heralded “the end of obscenity.”

Rosset’s battles against the censors transformed the cultural landscape. According to cultural historian Loren Glass, a generation of Americans now had access to a “common culture of revolutionary reading” – an eclectic mix of European modernist and avant-garde writing as well as previously exiled American works by authors such as Miller and Burroughs. Catering to booming enrollment in American universities, Grove Press paperbacks became the symbol – and the syllabus – of 1960s counterculture.

The way was now paved for Sade. Wainhouse’s Olympia Press translations were revised with Grove editor Richard Seaver and published in three volumes from 1965 to 1968. Though Rosset and Seaver were expecting a battle, to their apparent disappointment it never materialized.

“It would be convenient, I agree, for there to be a little scandal, that is a little censorship,” Seaver admitted wistfully in a letter to Wainhouse in 1965.

Nonetheless, sales were spectacular: Grove’s paperback edition of the first volume sold 240,000 copies in the space of a year.

But trouble – for Grove Press and for Sade – would eventually come from an unexpected source.

On April 13, 1970, former Grove employee Robin Morgan occupied the press’ offices with eight other protesters. Aside from demanding union recognition, Morgan railed against the fortune Rosset had made “off the basic theme of humiliating, degrading and dehumanizing women through sado-masochistic literature.”

This was the first sign of the prominent role Sade would play in the “porn wars” of the 1970s and 1980s. Morgan, whose pronouncement “Pornography is the theory, and rape the practice” became the slogan of anti-pornography campaigners, wasn’t alone in seeing Sade as an emblematic figure of contemporary misogyny. Radical feminist Andrea Dworkin devoted a chapter of her “Pornography: Men Possessing Women” (1981) to Sade, whom she labeled “the world’s most foremost pornographer.” Dworkin railed against the translators of “Sade’s thousands of pages of butchery” and was outraged that his work should now be “in accessible mass-market editions in the United States.”

Not everyone agreed with this assessment of Sade. The English writer Angela Carter acknowledged Sade’s misogyny but claimed he “put pornography in the service of women” by representing women as “beings of power.” In America, when “bad girl” feminists such as Ellen Willis, Gayle Rubin and Pat Califia defended pornography, they were derided as “Sade’s new Juliettes” by Morgan.

Sade in the classroom?

The controversies over Sade were as much about literature as they were pornography. Many started to question Sade’s place in the canon – and on university campuses.

Writing in 1990, cultural critic Camille Paglia hailed Sade as “a great writer and philosopher whose absence from university curricula illustrates the timidity and hypocrisy of the liberal humanities.” A few years later, however, literary critic Roger Shattuck noted with horror that “Sade is now being taught in a number of colleges and universities.” For humanists like Shattuck, Sade simply does not belong in the classroom alongside Dickens and Tolstoy.

Though he stops just short of answering the question of French philosopher Simone de Beauvoir – “Must we burn Sade?” – in the affirmative, the thought of Sade’s fiction becoming Literature is, to Shattuck, beyond the pale:

“Shall we receive among our literary classics the works of an author who desecrates and inverts every principle of human justice and decency developed over four hundred years of civilized life?”

I have been very fortunate to be able to teach Sade freely at my institution. Sade, however, remains unteachable on several university campuses in the United Kingdom and the United States. And he’s rarely taught in France.

If ever there was a time for placing misogyny and sexism under the microscope, however, surely it’s now. In my experience, there is nothing quite like Sade for converting undecided students to feminism.

Reading a novel like “The 120 Days of Sodom” is not – and should not be – easy. Most readers are likely to find it deeply upsetting. But this is a work that needs to taken seriously: For all its imagined horrors, there are few that have not been perpetrated in recent history. 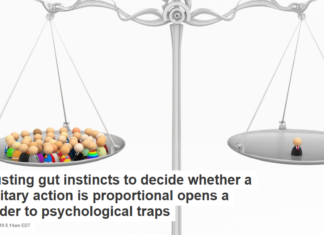 Trusting gut instincts to decide whether a military action is proportional...

Brownbagging it not always the healthy choice for kids’ school lunches

Why weren’t women allowed to act in Shakespeare’s plays?