In 2009, communications scholars Esra Özcan, Ognyan Seizov and I wrote an academic paper on the Danish Muhammad cartoon controversy and its aftermath.

We concluded that “visuals have to be taken more seriously as powerful communication tools on a global scale”. As the murderous attack on the offices of Charlie Hebdo has shown, once again political indifference toward the visual aspects of global communication has led to an underestimation of the risk and the vulnerability of visual artists.

The logic of visuals

Western civilization may be erudite and eloquent when it comes to text-based rhetoric. However, visuals hit a blind spot. The Western text-bias is pervasive in all spheres of life, beginning as early as elementary school, where visual analytic competencies are not trained to the same degree as textual and numeric analyses are.

While text-based communication is sequential – one argument follows another – the logic of visual communication is not; it is based on association. Visuals automatically elicit both interpretation of meaning and emotional reaction. To different people the same visual might mean completely different things. What makes one person laugh, offends another.

If the image remains contained in its original context (a particular French newspaper or a German TV-sitcom), then the usual give and take of social debate will mean that disputes can be resolved between key institutional actors in a non-violent way (think Robert Mapplethorpe’s controversial homo-erotic photography.)

Cartoons are a particular type of visual communication.

Biting humor, distortion of reality, satire and provocation are all part of the repertoire of the cartoonist. And in analogue times, his or her cartoons stayed on paper, physically within the territory of the target audience.

In the digital era, however, cartoons have lost their local anchoring and are set free for global, cross-cultural distribution. While the image that we see is the same, its meanings become multiple because they are derived from the context in which it is consumed.

One of the underlying misunderstandings of the original Muhammad cartoon controversy of 2005-2006 was the de-contextualization of the original cartoons produced for a specifically Danish audience.

What is more, visuals on the internet are conserved for eternity. They have an astonishing afterlife, even with those who have never seen them. As with any hearsay or rumor-based lore, the supposed insult of the original cartoon gets bigger and bigger with every retelling of the narrative.

What makes the Paris attacks all the more shocking is that at least one of the victims’ murder had already been visually “announced” in the Spring 2013 issue of Al Qaeda’s online PR-magazine Inspire. Charlie Hebdo editor, Stéphane Chaudronnier was one of nine – mostly Western – men displayed in a “Wanted” poster accompanied by the following text that cynically borrows from President Obama’s 2008 campaign slogan: “Yes We Can. A Bullet A Day Keeps The Infidel Away.”

How then should Western media report this atrocity? What should be the right and ethical visual strategy?

Experience with the visual coverage of mass shootings – from Columbine in 1999 to Norway in 2011 and Newtown in 2012 – shows that a focus on the perpetrators has serious consequences. Any visual coverage of them provides copycats with iconic images for hero worship. What these mentally-disturbed shooters and terrorists have in common is their ultimate goal: they crave media attention. In the case of Islamist terrorism, “recognition” of their deed in visuals and videos is crucial as a testament to their “martyrdom”.

Unfortunately, many television reports do not seem to understand what message their visual framing sends. To take one example, the first CNN coverage of the Charlie Hebdo massacre was a 3’36” video that included footage of al-Qaeda propaganda material (complete with voice over of the commands to “poison the enemy”) as well as photos of alleged ISIS fighters. Of the total video time, 2’21” are given to the perpetrators and their messages. By comparison the victims are only given 9 seconds and of those 7 seconds are taken up by showing the victim Stéphane Charbonnier portrayed as a felon.

The ISIS logo is in the top right
CNN

‘May their memory be deleted from history…’

Instead, democratic media and societies should be inspired by their common historic roots to punish the terrorists with what they fear most – oblivion.

In antiquity, the worst possible societal punishment was not death, but damnatio memoriae – the destruction of any visual or written memory of the perpetrator. Typically, their names were deleted from all public documents on paper and in stone, and their sculptures and likenesses were destroyed in an attempt to delete any future memory of their existence.

Forever forgotten: Geta, the son of Roman Emperor Septimus Severus whose face was deleted from this family portrait after his death
Staatliche Museen zu Berlin

In the aftermath of 9/11 and the following terrorist attacks there were a number of concrete examples how media can show respect for the victims, their families, and the traumatized public by denying the perpetrators any visual acknowledgment of their heinous deed. Cover pages of magazines were printed blank. The visual memorials were for the victims, and their families. This choice emphasizes the strength of civil society in times of great loss and mourning: remembering those who were deprived of their lives, and forgetting those who carried out these atrocities. 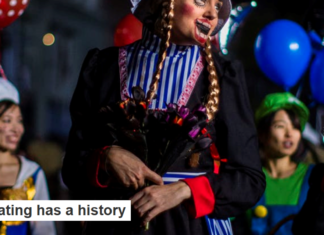 Staff Writer - October 26, 2017
Regina Hansen, Boston University Over the past few decades, Halloween celebrations have gained in popularity, not only with children and families, but with all those...