Since the inauguration of Donald Trump, hundreds of thousands of people have marched on Washington, D.C. – sometimes, repeatedly.

Two more big protests are scheduled for June: the March for Truth and the National Pride March.

The election of Trump has been a veritable shot in the arm to democracy in America. People are no longer bowling alone. They are marching and yelling together.

What’s more, we have done new research that suggests these large-scale events are part of a broader progressive movement.

A surge of social activism

The New York Times and others have referred to this surge in anti-Trump social activism as the “Resistance.”

At University of Maryland, we have worked with a team of student researchers during the first five months of Trump’s presidency, surveying protesters while they participated in these protests. Our team is made up of people with expertise on social movements, political mobilization, the places where race, gender and class intersect and racial and ethnic inequality.

Implementing a methodology Dana Fisher has used to study big protests since 2000, our team snakes through the crowds, surveying every fifth person who is willing to participate.

We randomly surveyed a total of 1,064 participants at the Women’s March, the March for Science and the People’s Climate March to learn who was participating and why. Although the protesters vary in many ways, our data show some important consistencies.

This finding is important because the literature on social movements typically assumes that marches that are focused on specific issues – like women’s rights or climate change – bring out different participants. Finding so many similarities across these populations of protesters suggests these discrete events are part of a bigger movement.

The Resistance is diverse

Respondents reported being motivated to participate by multiple pressing issues including women’s rights, the environment, reproductive rights, racial justice, immigration and LGBTQ issues. In fact, these issues were mentioned consistently by participants across the various marches, regardless of the main focus of the event.

Although respondents from our samples were predominately white and highly educated, the distribution of participants at the Women’s March and the People’s Climate March is pretty consistent with the racial and ethnic distribution of college-educated Americans. Nearly one-quarter of respondents reported being Asian, black, Latino or multiracial.

The Resistance is majority Democrat

What’s interesting is the percentage has gone down for each march, suggesting that the Resistance is increasingly drawing people from beyond the Democratic Party, specifically third-party voters and eligible voters who didn’t participate in the 2016 election.

Additionally, the majority of participants at all three events reported that the outcome of the 2016 election was important to their decision to march.

The Resistance is social media literate

Social media played an impressive role in mobilizing people to participate in the Women’s March, which started as a Facebook post by a white grandmother in Hawaii the day after the election.

Seventy percent of Women’s March participants said they heard of the march from Facebook and 40 percent said it was the most important channel through which they heard about it.

Facebook played a less dominant role in mobilizing participants for the March for Science (49 percent) and the People’s Climate March (31 percent), but it continued to be a main channel for information about the events.

The key question now is what happens next to all of these new activists. Will they remain engaged? Will this activism translate into a surge in voters in the midterm elections? How might organizations and political parties integrate these newcomers and keep them interested? Now matter what happens, we’ll be out there in the streets talking to the crowds. 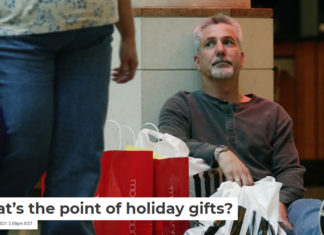 What’s the point of holiday gifts?

Staff Writer - December 20, 2021
Dimitris Xygalatas, University of Connecticut Whether it’s the dread of a trip to an overcrowded shopping mall, the challenge...

Stop criticizing bizarrely shaped voting districts. They might not be gerrymandered...