In October 2021 I was a guest on a popular podcast to discuss my recently published book, “Seed Money: Monsanto’s Past and Our Food Future,” which examines the agribusiness giant’s influence on the global food system. After the show, I got a lot of calls from around the world, but one really stood out to me: A farmer speaking on his cellphone from the seat of his combine in South Dakota as he harvested soybeans.

Farmers don’t like to stop tractors on good-weather days in the fall, but this was important. The caller wanted to talk about a chemical weedkiller called dicamba that had been sprayed on neighboring fields. He claimed it was damaging his crops. And he wasn’t alone.

In 2021, thousands of U.S. growers reported to the Environmental Protection Agency that dicamba sprayed by other farmers – sometimes up to a mile and a half away – damaged crops in their fields. Complaints came from all over the country.

The list of affected plants was astounding: sycamore, oak and elm trees; azaleas, black-eyed Susans and roses; garden tomatoes, peppers and peas. According to an EPA memorandum, there were 2,700 “dicamba incidents,” affecting about 3.6 million acres, in 2017. Two years later, the number of incidents ballooned to 3,300. https://www.youtube.com/embed/J0WoflW1TgQ?wmode=transparent&start=0 Farmers describe their concerns about dicamba damage in 2017.

This problem has been building for over five years, and the EPA acknowledges that the modest controls it has required, such as creating buffer zones around fields, aren’t working. But tighter curbs on use of dicamba aren’t likely before the 2022 growing season starts in the spring, because they would require a complicated legal process.

Why is it so hard to address this national problem? Answering that question requires looking back to 1996, when a revolution transformed American agriculture.

From Roundup to dicamba

Weeds have always been an expensive headache for farmers. A 2016 study estimated that if left uncontrolled, weeds would cut corn and soybean yields in North America roughly in half, causing US$43 billion in yearly economic losses just from those two crops. One of the problems farmers face is that weeds are very good at evolving resistance to chemical products used to kill them, so herbicides lose their effectiveness over time.

These plants were engineered to resist heavy spraying of Monsanto’s blockbuster herbicide, Roundup. Monsanto had developed and patented glyphosate, Roundup’s active ingredient, in the 1970s, but the advent of Roundup Ready seeds made glyphosate sales explode.

It seemed like a magical system: Farmers could treat fields with glyphosate throughout the growing season without hurting their crops. For a few years, overall herbicide use dropped: Farmers used glyphosate in huge quantities, but stopped buying most other herbicides. https://cdn.knightlab.com/libs/juxtapose/latest/embed/index.html?uid=80d6bc1c-7df5-11ec-abb7-b9a7ff2ee17c Use of glyphosate has increased dramatically since the introduction of Roundup Ready seeds starting in 1996 (move slider to compare 1995 and 2019 usage).

Monsanto asserted that this approach would make farming more sustainable by reducing long-term use of herbicides and pesticides – especially older, more toxic brands. Soon, however, the system started to falter.

In the early 2000s, scientists began reporting that weeds were evolving resistance to Roundup. In response, Monsanto rolled out a new generation of genetically engineered seeds that would make crops resistant to a wider array of older herbicides. Farmers could use these older products along with Roundup, improving their chances of killing most weeds.

One of the chemicals Monsanto bet on was dicamba, first introduced in the 1960s. In 2015 and 2016, the company began producing seeds branded “Roundup Ready Xtend” that were engineered to tolerate heavy spraying of both dicamba and glyphosate. The logic was that dicamba would eliminate glyphosate-resistant weeds, and glyphosate would wipe out all other unwanted vegetation.

A solution becomes a problem

It quickly became clear that this fix was seriously flawed. Dicamba is one of the most volatile herbicides on the market, meaning that it changes readily from a liquid to a vapor in warm temperatures. When farmers sprayed dicamba on hot days, it tended to vaporize and drift off target, spreading to fields and farms that often were not planted with crops genetically engineered to tolerate it. The South Dakota farmer who called me from his combine was harvesting organic soybeans that did not contain Monsanto’s Xtend traits.

Maddeningly for farmers, Monsanto had seen this coming. In a 2020 federal court case, Bader Farms v. Monsanto, confidential company documents revealed that the firm was aware that dicamba sprayed on Xtend crops would likely drift off target. Monsanto sales representatives even called this a sales point for dicamba-tolerant seeds. “Push ‘protection from your neighbor,’” one slide in an internal 2013 sales presentation suggested.

Farmers started complaining about dicamba drift soon after Monsanto introduced its first Xtend seeds. The Trump administration ordered farmers not to spray dicamba in buffer zones around fields, and to restrict dicamba application to particular times of day, but this had little effect.

Amid this controversy, the EPA extended approval in 2018 for three dicamba-based herbicides. But the U.S. Ninth Circuit Court of Appeals revoked this decision in June 2020, ruling that the agency had ignored or downplayed evidence of damage from dicamba and failed to consider how its licensed use would “tear the social fabric of farming communities.” In response, EPA approved new dicamba licenses with some additional control measures that it asserted met the court’s concerns.

Now the Biden administration is weighing how to address dicamba – and none too soon. Farmers reportedly are seeing weeds that have developed resistance to dicamba and other herbicides recommended for use with a new generation of genetically engineered seeds. According to weed specialists, this is happening precisely because farmers are using such large quantities of these chemicals during the growing season.

Seed companies like the German firm Bayer, which now owns Monsanto’s product portfolio, say one solution is for farmers to buy seeds that can tolerate a wider array of weedkillers. Recently, for example, Bayer sought approval for a new line of seeds that would make crops resistant to five different types of herbicides.

For farmers, this will mean greater reliance on an expanding array of petrochemicals, and therefore higher costs. Today, U.S. farmers use more than twice as much herbicide to grow soybeans as they did before Roundup Ready crops were introduced.

I see dicamba drift as a symptom of a larger petrochemical dependency that threatens the viability of the U.S. food system. My research in this area makes clear that if federal agencies really want to help farmers solve weed problems, they would do well to look to agricultural innovators who are demonstrating that crops can be grown productively and profitably without relying so heavily on synthetic pesticides.

In the U.S. and around the world, farmers are seeking alternative ways to deal with weeds. Some are diversifying what they grow, using time-honored practices like cover cropping, and looking to innovative methods coming out of a resurgent regenerative farming movement.

If these tools can create a future agricultural economy less reliant on petrochemicals derived from finite resources, I believe it would be welcome news not just to farmers but also to those of us who depend on them for our food. 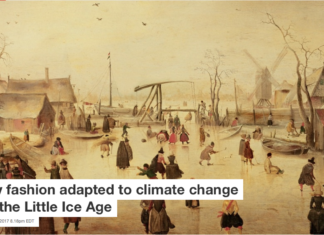 How fashion adapted to climate change – in the Little Ice...

Staff Writer - September 8, 2017
Lane Eagles, University of Washington One could say the consequences of the planet’s warming climate can be seen on fashion week runways and the shelves...