As we stood in Charleston on Calhoun Street in front of Emanuel AME Church, my friend, Dr Chenjerai Kumanyika, and I met three men who asked us why we were there.

I’m not sure if I effectively explained myself to them, because the truth was I hadn’t really figured it out then, and maybe I still haven’t figured it out now.

As a graduate student whose primary work fuses research and artistic interpretation, I sometimes find it difficult to answer such a question to my satisfaction or to the satisfaction of anyone asking. But I try.

Learning about the South

Of course, we’d come to show love and respect for those lost to the senseless, cowardly violence inflicted here, and to help support, in any way possible, the community dealing with this tragedy as the world focuses its attention on Charleston once again after the shooting of Walter Scott – two times too many in the last few months.

But I couldn’t get my mind off the statue of John C Calhoun – senator, vice president and strident defender of slavery – towering over Marion Square just a block away.

Two years ago, I knew exactly why I’d decided to come down from Illinois to Clemson University.

That was easy. The university’s program in Rhetorics, Communication and Information Design is perfect for my desire to combine my academic and artistic endeavors. It allows me to do work that’s thought-provoking and necessary.

The initial adjustments, however, were rough. They consisted of me learning about where I’d moved, what was there before me and what that meant for my present – and my future – there.

I learned about Clemson’s history as a slave plantation owned by John C Calhoun, and the benefits it received from slave labor, sharecropping and convict labor.

This information became the basis of my research, which I funneled into the See The Stripes campaign to raise awareness about commonly overlooked contributions to Clemson University’s history – its name is a play on the fact that the university’s mascot is a tiger with different colored stripes.

The campaign, in turn, led to many, many conversations across many communities at the university – from undergraduates and graduate students to faculty senate and even a debate hosted by the The State newspaper – over the course of the past school year.

While many were very productive, others were quite divisive, particularly the ones that dealt with the monuments and memorials on campus. More specifically, there was a lot of public controversy around the name of Benjamin Tillman being on the university’s most prominent building.

It is because of my last two years at Clemson that I arrived June 18 in Charleston fully aware of some of the historical parallels to the present moment.

The past in the present

Particularly chilling was the fact that this was not the first time a black state senator was murdered by a white supremacist and – let’s not shy away from this word – terrorist.

In 1876, State Senator Simon Coker – who was in Charleston investigating violence against blacks – was seized by a mob and shot in the head as he kneeled in a last prayer.

One of the perpetrators of that atrocious event was none other than the eventual governor and senator, Benjamin Tillman, who made his disdain for black people known, explaining,

“It had been the settled purpose of the leading white men of Edgefield to seize the first opportunity that the Negroes might offer them to provoke a riot and teach the negroes a lesson; as it was generally believed that nothing but bloodshed and a good deal of it could answer the purpose of redeeming the state from Negro and carpetbag rule.”

Dylann Roof said to one of the Emanuel AME massacre survivors,

“I have to do it — you [African Americans] rape our women and you’re taking over our country.”

Not only do I hear echoes of Tillman in Roof’s words, I see his reflection in Roof’s actions.

While the present governor of South Carolina, Nikki Haley, pleads ignorance, saying that “we’ll never know what motivates anyone” to do what Roof did, she need not look far from the seat she occupies – either historically, as she shares an office bequeathed by Ben Tillman, or literally, as the battle flag of the Confederacy flies at the State House outside her office – for some answers.

In South Carolina, there stand monuments and memorials to the progenitors of the very thoughts Roof spoke.

Maybe what brought me to Charleston in the wake of this tragedy is, in part, the same thing motivating my work at Clemson.

See The Stripes is an effort to help us see how history lives with us in the present moment. Without acknowledgment of our complicated pasts, we run the risk of unnecessarily repeating yesterday’s mistakes.

It’s difficult to see sincerity in Governor Haley’s condemnation of Dylann Roof’s actions while that flag flies on the Capitol and a statue stands to honor Tillman on state grounds.

It’s hard to believe her statements about the tragedy of the present moment given her call to keep a murderer’s name on our Main Hall at Clemson, and “accept history for what it is.” “Look forward and not look back,” Haley said in March, because “if you start changing the names you’re gonna be changing the names of a lot of things.”

I’m not so sure “changing the names of a lot of things” is such a bad plan. This isn’t to suggest we rewrite history or erase the past.

Maybe we should consider a bit more seriously how what we honor could be reinforcing those thoughts, words and actions we thought we left in the past. This is especially the case if the person who committed the acts and said the words we now condemn is immortalized in sculptures that are part of our everyday life.

There are others much more deserving of our attention than the Dylann Roofs and Benjamin Tillmans of the world. These are the people we should honor – looking backward, forward and at our present moment.

We owe to them a commitment to try to change the many conditions that caused the tragedies.

But let’s just not pretend our present doesn’t look eerily similar to our past.

If we refuse to accept our present, with hopes that we can do better and be better, can’t we do the same with our history? 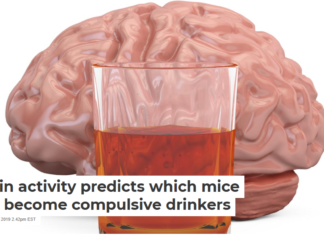 Staff Writer - November 21, 2019
Cody A. Siciliano, Vanderbilt University Some individuals consume alcohol their entire adult life without developing an alcohol use disorder. Others, however, quickly transition to compulsive...