Most Americans find a number of common hospital fundraising practices ethically unacceptable, according to a new study published in July. Examples of these sometimes troubling approaches included providing people who have a track record of making large donations with concierge services such as nicer rooms or doctor’s cellphone numbers, screening patients to identify those who are wealthy enough to give lots of money to charity and getting doctors directly involved with fundraising efforts that involve their current or former patients.

We found that 85% of the people who took our survey agreed that patients feel good when they donate to the hospitals where they received their medical care.

Yet 83% said they felt that when doctors talk with their patients about donating, it may interfere with the patient-physician relationship. And 91% said they believed that patients may feel pressure to donate if their doctor personally asks them to make a charitable contribution to support that hospital.

Although we conducted the nationally representative survey of 513 people in February 2019, we believe it’s still relevant today because of the large number of COVID-19 hospitalizations.

Our findings are consistent with prior work showing that doctors worry about how their relationships with patients may be affected by hospital fundraising.

U.S. hospitals rely on donations to cover some of the cost of providing care for patients, to perform medical research and to educate future health care professionals. Medical centers tied to universities alone raised over US$9.7 billion in the 2018-2019 academic year from their donors.

Since nearly everyone will spend some time in hospitals during their lives, we believe that it is important to ask people from a broad variety of backgrounds and perspectives what they think about these issues. Despite these practices being legally permitted, no one had previously asked members of the general public what they thought about the “grateful patient” fundraising programs that three out of four hospitals have, according to a 2016 survey.

We conducted this research after participating in the 2017 Summit on the Ethics of Grateful Patient Fundraising. The summit brought together a multidisciplinary group that included patients who have made charitable donations to hospitals where they have received medical care, physicians, bioethicists, lawyers, hospital administrators, fundraising professionals, social scientists and representatives of professional associations.

One conclusion of that summit was that health care organizations need to learn what the public thinks about fundraising from patients during their hospital stays to better understand the ethical implications of those practices. That’s what motivated our study.

We know that some hospitals are using these practices and that they are legal. Yet future research is needed to better understand how common these fundraising efforts are, especially those that people who completed our survey deemed ethically unacceptable.

In addition, we acknowledge that the ethical issues related to this are complex. This study just marks one step toward informing ethical guidelines for fundraising conducted during and after a patient’s hospital stay. 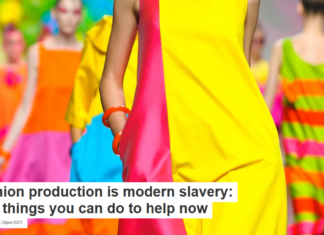 Staff Writer - April 24, 2019
Anika Kozlowski, Ryerson University Fashion shouldn’t cost lives and it shouldn’t cost us our planet. Yet this is what is happening today. Globalization, fast fashion,...