When I was conducting research for my new book on the destructive aspects of modern heterosexual relationships, I started looking into the archives of early 20th-century books about courtship and marriage written by physicians and sexologists.

In the process, I made a discovery that would radically alter my understanding of why so many parts of heterosexual culture remain mired in violence and inequality.

Almost all of the original self-help books for couples were written by proponents of the eugenics movement, an ostensibly scientific project that aimed to encourage reproduction among the white middle class, while discouraging or preventing population growth among people of color and the poor.

These early marriage manuals revealed that the project of defining healthy heterosexual marriage in the United States was also a white supremacist campaign designed to help white families flourish. As the marriage counseling industry evolved in the 20th century, some of the key assumptions made in these original manuals would persist, even influencing marriage advice aimed at Black families.

By the early 20th century, many prominent eugenicists were concerned about the state of marriage. White women, cowed by abusive husbands, were unwilling to have sex, and marriage increasingly seemed to be an exercise in mutual misery.

This, in their view, could limit the ability of the best elements of the human gene pool to propagate. So, with the support of the Eugenics Publishing Company, they set out to educate white readers with tips for how to achieve a friendly and harmonious marriage.

These texts reveal some common assumptions made about early 20th-century marriage. Women were not expected to feel an easy or instinctive attraction to men, nor were men expected to concern themselves with women’s emotional or physical well-being. One point nearly all sexologists agreed upon: Women needed to understand that men were naturally inclined toward aggression and sexual selfishness, so they should cut their husbands a little slack.

William Robinson, an early 20th-century sexologist, hoped that his marriage advice manuals would address the “disgust,” “deep hatred” and “desire for injury and revenge” that heterosexual couples felt for one another.

Marie Stopes, a British eugenicist, wrote at length about how most new brides were repulsed by the revelation of their husbands’ naked bodies, and were “driven to suicide and insanity” by men’s violence during “the first night of marriage.” Harland William Long, another eugenicist writer, agreed, observing that “many a newlywed couple have wrecked the possibility of happiness of a life time” because “the great majority of brides are practically raped on entrance into the married relation.”

The British sexologist and eugenicist Havelock Ellis argued that this violence was natural, and explained that a husband took “a certain pleasure in manifesting his power over a woman by inflicting pain upon her.”

But Ellis also insisted that “the pain he inflicts, or desires to inflict, is really part of his love,” and that, with proper training, a man could be taught to express this “love” with more gentleness, and mitigate the “repulsion and passivity” that seemed to be a normal part of women’s experience of sex.

Eugenicists were well-aware that white men regularly raped white women, so it’s striking that this period coincided with the widespread lynching of Black boys and men falsely accused of raping white women.

Yet eugenicists described white men’s rape of women not as criminal, but as an inherent masculine impulse in need of suppression. Of course, they didn’t advocate for the lynching of these men. Instead, education and good hygiene would do. Sexologists promoted soaps, perfumes, makeup, douches and corsetry as the key to marital happiness. If women and men smelled better, maybe, the thinking went, men wouldn’t need to force their wives to have sex with them.

Some of the core tenets of those first self-help books written by eugenicists – incompatibility and deference to men – persist in modern marriage advice.

With the rise of the self-help industry, late 20th-century marriage advice shifted from men’s and women’s repellent bodies to their incompatible personalities.

Relationship counselor John Gray’s “Men Are From Mars, Women Are From Venus” sold over 50 million copies and was the best-selling nonfiction book of the 1990s. The book’s central message is that men and women do not naturally like or respect one another, and need to learn to accept and accommodate their innate gender differences for the sake of their relationships.

The central themes found in these self-help books are now marketed to straight Black readers, too. For instance, Steve Harvey’s 2009 New York Times bestseller, “Act Like a Lady, Think Like a Man,” sold over 3 million copies and repackaged many well-worn marriage tropes for Black women readers. In it, Harvey argues that men and women are fundamentally at odds, that straight couples must work to be attractive to each other and that Black women need to accept men’s limitations for the good of Black families and communities.

Men, Harvey writes, have “got to feel like we’re king, even if we don’t act kingly.” A man, he continues, “needs that from his woman” so that he can have “the strength to keep on doing right by you and the family.” Because Black men suffer the burden of anti-Black racism, it is in their homes and relationships, according to Harvey, that they must be treated like royalty.

Omitted from all of this, of course, is Black women’s experience of anti-Black racism, and the various ways it is compounded by the unique forms of misogyny that Black women endure – what queer Black feminist Moya Bailey has termed misogynoir.

Much has been written about the hardships endured by queer people. Almost all of us are familiar with queer suffering. Yet we tend to overlook the miseries of straight culture, despite overwhelming evidence.

Relatively honest accounts of these miseries exist in the past and present world of self-help books, or what I call the “heterosexual repair industry.”

Inside the volumes of marriage advice for straight couples, one message has been clear: forging modern heterosexuality is a difficult accomplishment, one undeniably shaped by the intersections of white supremacy and misogyny. 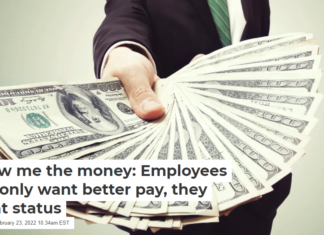 Show me the money: Employees not only want better pay, they...

Staff Writer - February 24, 2022
Scott Schieman, University of Toronto https://narrations.ad-auris.com/widget/the-conversation-canada/show-me-the-money--employees-not-only-want-better-pay--they-want-status There has been endless chatter about the Great . Resignation....