On Veterans Day, many Americans drape the Stars and Stripes around their neighborhoods, businesses promote U.S. flags alongside their holiday discounts, and officials display them in government buildings.

The holiday started off as a day to honor those who fought in the “war to end all wars” and marked the armistice that ended hostilities on Nov. 11 exactly a century ago. And today Americans wave flags to commemorate all veterans and active-duty members of the U.S. armed forces.

Recently, while walking by a VFW Post dutifully displaying a U.S. flag, I read a newspaper headline about the president’s latest round of tariffs on Chinese goods. The juxtaposition of seeing the flag and the headline made me wonder, how many of those star-spangled banners actually come from China? And if so, are they being hit with the tariffs too?

You may be surprised at the answers – I certainly was.

Every shipment of imports brought into the U.S includes a detailed invoice that shows the price, quantity and category of goods being imported, as well as any tariff that’s been applied. The national flag of the United States even gets its own code: 6307909825.

The Harmonized Tariff Schedule shows imported flags must pay a 7 percent tariff unless the country of origin has signed a free trade agreement with the U.S.

These imports represent just a tiny fraction of the estimated 150 million U.S. flags Americans buy each year. Nevertheless, 10 million is still a large number for a national symbol.

The typical flag made in China is not the giant banner waving over car dealerships, town halls and fast-food restaurants. Instead, they’re the small ones you and your friends might wave at a Veterans Day parade. The average imported Chinese flag cost the importer only 56 cents, without including any tariffs, and weighs about two and a half ounces.

That so many Americans flags come from China seems incongruous to some, suggesting that this fact somehow undermines its patriotic symbolism.

As a result, a long list of bipartisan members of the House introduced the “All-American Flag Act” in June 2017. The bill would require all flags purchased by the federal government to be manufactured entirely in the United States using only raw materials that were grown, produced and manufactured domestically.

Currently, federal agencies are bound by the “Buy American Act.” This rule requires that all flags purchased by the government be made with materials that are at least 50 percent American.

While the legislation did not make it out of committee, it is not from lack of trying. Similar bills have been introduced in every Congress since 2003.

Since the legislation only affects federal purchases – estimated at over 100,000 a year – there would likely be little impact on the number of flags imported.

But given President Donald Trump’s efforts to get more citizens to buy American products, I thought it would be only natural that he would include the national flag on the list of Chinese imports being hit with tariffs.

The tariffs are 10 percent as of Sept. 24 and will rise to 25 percent on Jan. 1. The full list of items subject to tariff contains thousands of product categories, from anchovies to zinc products.

A way to make the tariffs less painful

I am an economist and generally favor free trade because of the benefits I and many other parts of society receive.

The tariffs have divided Americans and businesses about whether they’re a good thing. While some support them, others are suffering because of the rising costs of raw materials or the higher prices at the cash register.

Trump clearly thinks the tariffs are the right way to make trade with China less unfair and appears skeptical about free trade more generally. He also wants Americans to buy more goods made at home.

I have a simple suggestion. Instead of putting punitive tariffs on a very large list of products, let’s instead put the tariffs on a much smaller list of important items, such as steel, which China is accused of dumping. Let’s also put tariffs on items tied to national defense, plus a few symbolic goods, like flags.

This would ensure most of the benefits of free trade are maintained, while the president is able to conduct a policy that doesn’t hurt as many U.S. businesses yet telegraphs to China and other countries that they’ll have to change their behavior.

As a result, the act of waving a flag on Veterans Day to honor the men and women who keep the U.S. free will be doubly patriotic. 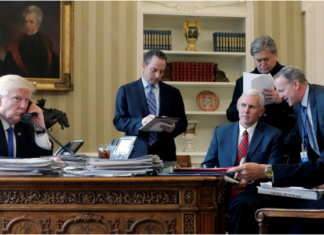 Staff Writer - February 17, 2017
Jordan Tama, American University School of International Service Exactly how will the U.S. conduct a fair and accurate investigation into Russian meddling in the 2016...