Despite widespread objections, Venezuela’s president, Nicolas Maduro, is moving ahead with a plan to rewrite the country’s constitution.

Maduro argues a new constitution would contain the deadly violence that has gripped the nation and restore cooperation between the different branches of government. A vote is scheduled for July 30 to elect a National Constituent Assembly that will write a new constitution.

However, observers warn a new constitution will violate democratic principles. The governments of Mexico, Chile, Argentina and Colombia have demanded the restoration of democracy.

Yet, Maduro is determined to move his proposal forward. A bad situation in Venezuela is likely to only get worse.

Experts agree that the existing constitution requires the president to call a referendum to allow the people to decide if they want a constituent assembly. However, polls suggest 85 percent of the population rejects the president’s proposal. And, on July 16, one-third of registered voters voted against having an assembly in an informal referendum organized by opposition activists.

Aware that he would likely lose a referendum vote, Maduro skipped that step. Instead, the electoral authority scheduled a vote to choose assembly members.

This move is clear evidence that Maduro is authoritarian. Authoritarian leaders often seek to establish new constitutions to strengthen their rule and control the opposition. This involves excluding sectors of the population from the constitution writing process and legalizing oppressive practices. History shows many examples of countries where governments seek to rule without restrictions.

Some of the best-known examples of this come from Latin America, a region where autocratic constitutions have been commonplace. Take, for example, the 1967 Brazilian Constitution or the 1980 Chilean Constitution, created by military regimes. These constitutions, among other things, banned political parties, legalized censorship and severely restricted civil rights.

The creation of a new constitution in Venezuela fits this description. It would formally dissolve current institutions and designate new authorities (for example, dissolve the opposition-controlled congress and appoint a new attorney general supportive of the regime).

Squeezing out the opposition

Maduro’s party, the PSUV, has the support of only 20 percent of Venezuelans. However, PSUV designed the rules for electing the Constituent Assembly’s 545 delegates, so it will likely control the body.

Moreover, 30 percent of the seats in the Constituent Assembly have been reserved for “sector representatives”: deputies elected by various groups such as students, workers and teachers, most of whom are controlled by the government. Under those conditions, the opposition has no chance to elect a meaningful number of representatives.

As a result, the opposition has refused to participate in the Constituent Assembly. With few opposition members in it, if any, the assembly would be free to redesign the state at will without consulting the Venezuelan people. Observers are concerned that this body, or the constitution they write, could bar opposition candidates from running for office. They worry it may establish new restrictions on democratic freedoms, such as stricter media regulations.

Former regime supporters, including Attorney General Luisa Ortega, have denounced the Constituent Assembly as a shameless move to consolidate power and institutionalize political exclusion. Foreign governments, like Brazil and the Vatican, have denounced the move as authoritarian as well.

Despite this opposition, the head of the Armed Forces has endorsed the proposed Constituent Assembly, and the pro-government Supreme Court has blocked all attempts to stop it. Cornered, the opposition has turned to civil disobedience and increased street protests, at an immense cost. The toll of people imprisoned, wounded and killed grows by the day and the government shows no signs of retreat.

Can violence be avoided?

The situation in Venezuela is perceived by both parties as a zero-sum game. The military, which holds de-facto power in the country, refuses to stop supporting the government.

The international community – despite strong pronouncements and threats of sanctions – has failed to coordinate an effective strategy to overcome the crisis. And the opposition is struggling to leverage its victory in the July 16 informal referendum to advance its pro-democratic agenda.

Frustrations have been rising since March, when Maduro took over the functions of Venezuela’s lawmaking body – the National Assembly – which was controlled by his opposition.

Since then, protests against the Maduro regime have broken out in which more than 100 people have been killed and hundreds more wounded. Opposition demonstrators are being harassed by armed pro-government groups, repressed by security forces, picked up and jailed indiscriminately and tried in military court. In June, the National Guard stood by when Maduro’s supporters stormed the opposition-controlled National Assembly.

In this environment, radicals from both sides are beginning to feel empowered, to the detriment of more moderate leaders. With the crisis escalating and no solution in sight, it is hard to predict what will happen next.

Between a desirable return to democratic rule and the consolidation of dictatorship lie a range of possibilities, including ongoing conflict and civil strife. 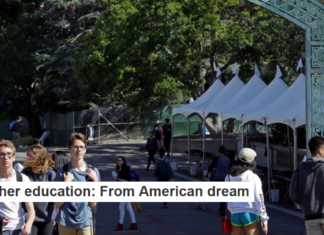 Staff Writer - November 1, 2017
John R. Thelin, University of Kentucky For the Golden State of California, 1960 was a golden year: It was a time of rapid development, when...