All animals, whether they live on land or in the water, require oxygen to breathe. But today the world’s oceans are losing oxygen, due to a combination of rising temperatures and changing ocean currents. Both factors are driven by human-induced climate change.

This process has the potential to disrupt marine food chains. We already know that large hypoxic, or low-oxygen, zones can be deadly. If hypoxia expands in both size and duration, it is possible to cause widespread extinction of marine life, which has happened previously in Earth’s history.

We investigate natural, ancient changes in ocean oxygenation and the biological effects as a way of understanding the natural response to potential future climate scenarios. In a recent study, we examined links between a major volcanic event that occurred millions of years ago and changes in ocean oxygen levels. Like human activities today, this event released massive amounts of carbon dioxide and other greenhouse gases into the atmosphere.

We found that this episode appeared to trigger significant oxygen losses in the world’s ocean that lasted over one million years. Our research adds to growing evidence that marine oxygen contents are dramatically affected by warming temperatures and other climate-related feedbacks caused by the release of greenhouse gases.

Are our oceans suffocating?

The world’s oceans have lost more than 2 percent of their dissolved oxygen reservoir over the past five decades. In many places local factors such as nutrient pollution are making the problem worse. In U.S. waters, major hypoxic zones regularly form in the Gulf of Mexico, the Great Lakes and along the Pacific coast. Other coastal waters are similarly impacted around the world.

Hypoxia can devastate fish catches. For example, a major fish kill in the Philippines in 2002 was directly associated with declining oxygen levels in the water. A similar event occurred in Redondo Beach, California in 2011 when hypoxic conditions over several days decimated the local fish population. Ultimately, these events have significant impacts on humans, since 40 percent of the world’s population lives within roughly 60 miles of the ocean. Millions of people depend on fish for food, income or both.

Past volcanic eruptions are probably our only ancient analogs to modern release of greenhouse gases from human activities. To understand how these events affected the oceans, we turned to ancient marine rocks that can record the relationship between carbon dioxide releases from volcanoes, marine oxygen levels and extinction events.

One such event, which occurred 183 million years ago during the Early Jurassic, is called the Toarcian Oceanic Anoxic Event. It is renowned for major volcanism and the seventh-largest mass extinction in Earth’s history, which occurred predominantly in the oceans. The volcanism that occurred was much larger in scale than all modern volcanoes, and would have released massive amounts of greenhouse gases to the atmosphere, warming the planet dramatically.

We applied a new and novel tool – thallium isotopes – to determine the timing and amount of oxygen loss from the oceans during this event. Thallium is a soft, silvery metal that is found in various ores, including balls of manganese on the ocean floor. Isotopes are atoms of the same element that have slight mass differences because they contain varying numbers of neutrons.

Numerous minerals form in the ocean, often through reactions that involve oxygen. But the amount of free oxygen in seawater is not constant in the modern ocean, and has also varied in time. When oxygen is abundant in the ocean, manganese oxides deposit on the ocean floor, and thallium – especially its heavier isotopes – stick to them. By analyzing ancient marine sediments and looking for shifts in thallium’s isotopic value, we hypothesized that we could track the progressive loss of ocean oxygen.

To do this, we collected specific dark-colored sedimentary rocks from this time period at sites in Canada and Germany, which represented two different ancient oceans. We then dissolved each layer of rock to form a liquid, and isolated and purified the thallium in each sample.

This work shows for the first time that the global ocean lost oxygen coincidentally with the onset of volcanism. Importantly, this happened at the onset of a known extinction called the Pliensbachian-Toarcian mass extinction event. In other words, the first signs of the extinction in the fossil record coincide with oxygen loss in the oceans.

We now think that this state of low-oxygen marine conditions lasted for over one million years and across two extinction pulses. The second phase of deoxygenation was more expansive, thus causing a larger extinction. It happened even though the atmosphere contained enough oxygen to support life, much like today. Furthermore, the duration of low oxygen conditions was similar to another event that occurred 94 million years ago with biological consequences.

The Intergovernmental Panel on Climate Change recently released a Special Report on Global Warming of 1.5°C, which called for immediate action to limit climate change to levels that will minimize environmental and ecosystem stress. Scientists broadly agree that this means preventing global average temperatures from rising more than 1.5 degrees Celsius above preindustrial levels.

The report notes that if temperatures increase by 2°C instead of 1.5°C, substantially more oxygen loss will occur in the oceans. This makes it important to continue studying ancient impacts of oxygen loss on the extinction record, so that scientists can better predict future climate scenarios. It is also important to identify areas that will be most impacted by ocean oxygen loss and limit the environmental effects that will occur as our planet continues to warm. 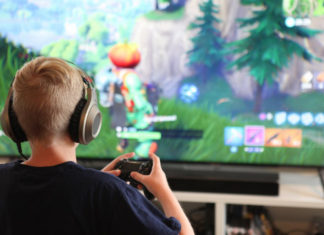 Staff Writer - October 13, 2018
Nicholas Tampio, Fordham University In recognition of the fact that “Fortnite” has quickly become one of the most popular video games in the world –...