We live in an age of self-obsession. Everywhere we look, we encounter a preoccupation with self-interest, self-development, self-image, self-satisfaction, self-love, self-expression, self-confidence, self-help, self-acceptance … the list goes on.

An internet headline sounds a warning: Facebook and Twitter are creating a vain generation of self-obsessed people with childlike need for feedback, warns top scientist. In 2013 no less august an organ than the Oxford English Dictionary chose “selfie” as its “Word of the Year”.

Ask yourself whether any other time but the present could boast of successful print magazines called i or Me or Self?

“The self” is actually quite a problematic notion. Given the destiny of the self concerns us so much we could all benefit from a little insight into its nature.

I’ll present here the view that the self is an entity which constitutes itself through its own acts of choosing and doing, and which grows (and grows responsible) in the process.

The great philosophical sceptic David Hume puzzled about the self in his Treatise of Human Nature(1739):

For my part, when I enter most intimately into what I call myself, I always stumble on some particular perception or other, of heat or cold, light or shade, love or hatred, pain or pleasure. I never catch myself at any time without a perception, and never can observe anything but the perception.”

He inferred that what passes for the self is “nothing but a bundle or collection of different perceptions”.

Hume was limited by his devotion to the Empiricist principle that the world must be understood solely as a construct derived from bits of experience woven together in various ways. Yet he raised a real issue: Where do we get the concept of self from and how do we justify it? Is the self to be included among the furniture of the universe, or is it merely an elusive fantasy (as Buddhism teaches)?

Although there is much to debate concerning the self, belief in it can be defended.

Does this entail that it is part of our basic ontology, that is part of the inventory of what we believe to exist? Yes, and for two reasons:

So what is a self?

Hume is surely correct to state that it is not some thing that we can “stumble on” in our inner experience, or that is constantly present to our consciousness. Yet there is still room to argue that the self is a network of relationships forged by significant experiences (past and present), actions, and connections with people, places, things and events. The self therefore becomes “a bundle of relationships.”

And what we make of these relationships and do about them manifests who we are.

A self comes into being and perpetuates itself by means of choices and actions that create connections — relationships — with the world around us and with ourselves, which we integrate into our self-understanding as we move through life. The venerable 20th-century philosopher Bertrand Russell points out, in The Problems of Philosophy (1912), that relationships of various kinds are genuine aspects of the world that define the nature of individual entities.

One of these is what we call “reflexive self-awareness”, in which we make ourselves objects of our own scrutiny and judgement.

We might say that the self creates itself out of nothing; but more accurately, it arises out of our innate tendencies, which each of us develops in different ways, according to choice. Experiments on pre-linguistic children have shown that cooperative relationships with others are apparent at a very early age. See, for example, the work of Michael Tomasello in his book A Natural History of Human Thinking. These tendencies begin to help determine a self, even at the first stage of human development.

I suggest, then, that a self is the organised complex of relationships with people and other entities, events, states of affairs, memories and so on, established over time, and that the beliefs and values we adhere to are built up from our responses to what goes on outside as well as within our own self-consciousness. Strangely enough, this entails that the self exists within us and also extends outward spatially.

The self is, paradoxically, a self-made being.

For this reason, the question is:

What kind of self do I choose to be; and is there room in this self for the concerns of others to gain recognition and response – especially those in relation to whom I have become who I am?

Surely, confronting this question seriously is the cure for self-obsession. 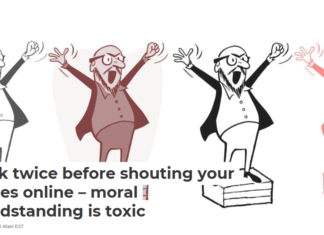