Many of us are well versed in the negative health consequences of being obese. For those of us who aren’t, public health marketing campaigns such as Live Well in England and Take Life On Scotland and endeavour to spread the word and highlight the benefits of eating healthy, exercising regularly and maintaining a healthy weight. The message at the heart of these campaigns is a critical one.

The negative health implications of being obese are wide-ranging. Adults with a body mass index (BMI) of more than 30 are vulnerable to various conditions associated with disease and death including cardiovascular disease, osteoarthritis and some cancers.

There are economic consequences too. The most recent estimate we have suggests that in Scotland, obesity and related illnesses cost the NHS more than £175m in 2007/08, with the cost to economy as a whole in excess of £457m. It is not just a Scottish problem, of course. A report published last month suggested that obesity costs Britain as a whole £47bn a year, generating an annual loss equivalent to 3% of GDP.

What does this really cost?
Lis Ferla, CC BY

The size of things

So just how big a problem is obesity? Each year for the Scottish Health Survey, we weigh and measure around 5,000 adults and nearly 2,000 children, providing the most robust estimates available on BMI in the Scottish population. The latest figures, published today, show that nearly one in three adults (27%) in Scotland are now obese and around two-thirds (64%) are overweight or obese.

And while 70% of children fell in the healthy weight range in 2013, one in six (16%) remain at risk of obesity. Inequalities also persist; adults living in the 20% most deprived areas of Scotland are significantly more likely to be obese than those living elsewhere. Given the health implications and subsequent burden on the NHS, this is hardly great news. Scotland has one of the worst obesity records among OECD countries and, along with the rest of the UK, ranks uncomfortably highly in the global obesity league table.

One of the biggest advantages of the Scottish Health Survey is that it is carried out every year, allowing us to monitor health trends including obesity over time. Since the survey was first carried out back in 1995, we now have trend data spanning nearly two decades.

In the early years of the time series, obesity prevalence among 16-64 year olds increased sharply from 17% to 26%. In the past five years however, there has been no significant shift in the proportion of the adult population with a BMI of 30 or more. In 2008, 25.7% of 16 to 64-year-olds were obese – and the latest estimate is that in 2013 25.6% were. We’re seeing a similar pattern with respect to children’s obesity.

The full set of findings from our sister survey, the Health Survey for England, is being published on December 10, but early findings released last month suggest that childhood obesity in England may also now be stabilising. A recent report from the OECD indicated that Canada, Italy, Korea, Spain and the US are all now experiencing similar trends in obesity.

Good news surely? It’s certainly encouraging, but a note of caution: while the rise in BMI looks like it may have come to a halt, the same can’t be said for waistlines. Between 1995 and 2012/13, the average waist circumference for men aged 16-64 increased by 6cm (from 90.2cm to 96.2cm). There has been an even larger increase in the average waist circumference of women over this same period: up 8.7cm from 78.5cm to 88.7cm.

This trend matters because abdominal obesity – the accumulation of fat around the middle – puts a person at increased risk of heart disease and type 2 diabetes. It is also reported to be more highly correlated with metabolic risk factors (high levels of triglycerides, low HDL-cholesterol) than elevated BMI. So it’s important that, where possible, BMI is analysed in combination with waist circumference when monitoring individual and population level obesity.

With over a quarter of adults still obese and a third of men and half of women with raised waist measurements, there is still plenty of reason for concern. The signs that BMI may have plateaued are encouraging, but it is clear that tackling obesity is going to remain a key priority for government and public health professionals for some time to come. 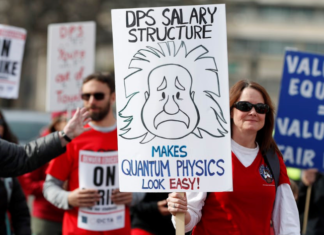 Best Easter pageant ever? Half a century of ‘Jesus Christ Superstar’

How parenthood has changed the way I read ancient stories of...