President Donald Trump recently slapped tariffs of 25 percent on imported steel and 10 percent on foreign aluminum, prompting significant concern and discussion about the wisdom of this action.

As an economist who shares some of those concerns, I believe it’s important to first understand what a tariff actually is and does before we can determine whether Trump’s new trade barriers are good or bad.

A tariff, simply put, is a tax levied on an imported good.

There are two types. A “unit” or specific tariff is a tax levied as a fixed charge for each unit of a good that is imported – for instance $300 per ton of imported steel. An “ad valorem” tariff is levied as a proportion of the value of imported goods. An example is a 20 percent tariff on imported automobiles. Both tariffs act in similar ways.

Tariffs are one of the oldest trade policy instruments, with their use dating back to at least the 18th century. Historically, the main objective of a tariff was to raise revenue. In fact, before ratifying the 16th Amendment in 1913 and formally creating the income tax, the U.S. government raised most of its revenue from tariffs.

Even so, the main purpose of a tariff these days tends to be about protecting particular domestic industries from foreign competition, alongside raising revenue.

The impact of a tariff depends on whether the levying country is large or small – not in terms of size but the potency of its trade and ability to influence world prices.

Ghana, for example, roughly the size of Minnesota with a population similar to Texas, is the world’s top exporter of cocoa. The Netherlands, meanwhile, slightly smaller than New Jersey, is the commodity’s biggest importer. As such, both countries’ trade policies can have a significant impact on the price of cocoa on global markets.

So if the Netherlands were to levy a tariff on imports of Ghanaian cocoa to protect a nascent – and currently imaginary – industry of small Dutch cocoa bean growers, there would generally be three effects.

First, the price of the import good, cocoa, would rise, making it more costly for domestic consumers of the product. This would be bad news for Dutch chocolatiers – the Netherlands is the world’s biggest exporter of cocoa butter – and citizens – who eat a lot of chocolate. But it’d be good news for companies in the domestic import-competing industry – the experimental Dutch farmers growing cocoa plants in a greenhouse – because the good they produce is now cheaper than the import, and so the cocoa butter makers would buy more of the local variety.

Second, because the tariff-levying country is large, it drives down the export price of the good in question. So the pre-tariff price at which Ghana can export cocoa to the Netherlands declines, Ghanaian growers and producers make less money, and the country’s economy is hurt. Economists call this a “terms of trade gain” for the country imposing the tariff. Such a tariff ensures that the price of cocoa in the Netherlands does not rise by the entire amount of the tariff.

Finally, the overall volume of trade in the product between the countries involved decreases because the demand for and supply of the good falls.

If the tariff-levying country is small, however, there are only two effects: The good’s price will go up – domestic consumers will pay more, while producers will sell more – and the country’s trade of the product will decline. The action will have no impact on global prices.

For a “large” country, the benefits of a tariff are mixed.

Consumers, whether businesses like Dutch cocoa butter makers or individuals who enjoy a tasty bar of dark chocolate, face higher prices and hence are the losers. The industry being protected, however, benefits by becoming more competitive and selling more of its wares. In addition, the government will gain a new source of revenue.

The net effect boils down to whether any gains in the terms of trade are greater than the resulting “efficiency loss” – that is, how much the tariff artificially distorts consumption and production decisions in negative ways.

If the magnitude of the terms of trade gain is larger than that of the efficiency loss, then the country benefits from the tariff. If not, then it loses.

For a small country with no market impact, the terms of trade gain is zero, hence a tariff unambiguously makes it worse off.

The fact that a large country can, in some cases, be better off with a tariff has led some to suggest that such nations ought to, when necessary, levy “optimal tariffs” against their trade partners.

An optimal tariff maximizes the difference between the terms of trade gain and the efficiency loss and hence is essentially a “beggar-thy-neighbor” trade policy.

In other words, the problem with such strategic tariffs is that in addition to frequently being illegal, they are not implemented in a vacuum. Aggrieved trade partners are likely to respond with appropriate tariffs or other trade policy instruments of their own.

These kind of sequential “tit-for-tat” actions can easily degenerate into a trade war. This is in part why trade economists are typically against restricted trade and for free trade. 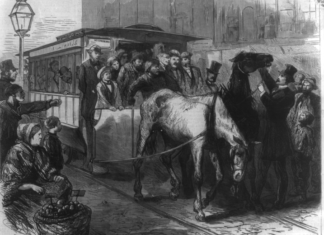 Staff Writer - December 5, 2020
Ernest Freeberg, University of Tennessee In 1872 the U.S. economy was growing as the young nation industrialized and expanded westward. Then in the autumn, a...

Should Elon Musk try to solve the problem of world hunger...