When President Donald Trump talks about “patriots” – and he does, a lot – he probably doesn’t have in mind a fictional Black American sailor sitting in a cafe in Wales, listening to locals sing folks songs.

But in Ralph Ellison’s short story “In a Strange Country,” the protagonist, Mr. Parker, listens to Welsh songs that simultaneously express loyalty to the queen and defiance of England, and sees something of his own situation and conflicting feelings to the land of his birth. When the locals begin to sing “The Star Spangled Banner,” Mr. Parker finds himself singing along. Thousands of miles away from his homeland and fighting back tears, he sings his national anthem for the first time without irony.

It is a form of patriotism echoed by another Black American, this time the very nonfictional author and thinker James Baldwin. In 1963, Baldwin wrote: “I love America more than any other country in the world, and exactly for this reason, I insist on the right to criticize her perpetually.”

Trump sees patriotism differently. For him, it is unconditional. Even before coming to office, he was tweeting about the topic, on one occasion using the Mark Twain adage: “Patriotism is supporting your country all the time, and your government when it deserves it.”

More recently, he has bestowed the term on his supporters and sought to cast them as being more patriotic than Black Lives Matter protesters.

In September, Trump announced plans for a “patriotic” and “pro-American” curriculum in American public schools.

In unveiling a proposed “1776 Commission” to ensure that “our youth will be taught to love America,” Trump was seemingly responding to The New York Times’ Pulitzer Prize-winning 1619 Project. That project aims to “reframe the country’s history by placing the consequences of slavery and the contributions of black Americans at the very center of our national narrative.”

Trump appears to imply that loving America is incompatible with acknowledging that the U.S. has oppressed certain people and groups on its path to glory.

As a moral theologian and someone who frequently engages the writings of medieval thinkers, I can’t help but notice that this understanding of patriotism is relatively novel. The concept that a “good” patriot unquestionably loves his country unconditionally is not in keeping with how it has been viewed throughout history.

The word “patriot” comes from the ancient Greek “patrios,” translated as “of one’s fathers.” As such, in the original meaning a patriot is someone who belongs to one’s fatherland. No judgment was made as to how that person should view the fatherland. This came later.

The medieval scholastics – a diverse group of thinkers including such luminaries as St. Bonaventure and St. Anselm of Canterbury – were known for reviving and developing ideas that originated in ancient Greek philosophy.

To belong to something, according to the scholastics, is not a mere observation of fact. It generates moral obligations, because we owe a debt to the things that give us life. As St. Thomas Aquinas wrote, “The principles of our being and government are our parents and our country, which have given us birth and nourishment. Thus, a person is debtor chiefly to their parents and their country, after God.”

The virtue of piety

The scholastics had a name for this virtue: piety. The virtuous person honors and loves the things that have brought them into being, and this includes one’s homeland. “Piety,” St. Thomas writes, “is a declaration of the love we bear towards our parents and our country.”

While perceived wrongdoing may lead us to denounce the actions of our country’s government, such criticism is compatible with – and, indeed, necessitated by – the virtue of piety, according to the scholastic understanding of the virtue of justice.

As such, we should study the shameful aspects of our nation’s past not only because it is fair and honest but also because it can can make us love our country more. In short, it can make us better patriots.

As the theologian and philospher G. K. Chesterton once quipped, “Men did not love Rome because she was great. She was great because they loved her.”

A modern interpretation could be that an American patriot will always love America, but he or she may not always be pro-America.

This is an interpretation that jars most with Americans on the political right. But there is also a lesson here for some Americans on the left that criticism of one’s own country should not spill out into contempt. Hatred or indifference toward one’s country is not a virtue, in the eyes of the scholastics.

So someone can be a “good American patriot” who ardently loves America while also lamenting its shortcomings – both past and present. If Trump’s proposed K-12 curriculum can maintain both of these virtues, then it would be truly patriotic. But if it leads to educators who insist that students be blindly pro-American, it would merely be propaganda.

Aquinas Institute of Theology is a member of the Association of Theological Schools. 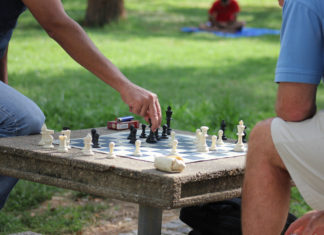