Why does the little-science world of atoms obey rules of physics that seem to confound every-day common sense notions of position, space, time, cause and effect? And why does the big-science world of cosmology posit that time and space are warped near a black hole?

I can’t talk for cosmology but, if you step into my garden, I’ll try to talk for quantum mechanics.

Suppose I plant a tomato seed. In the first month the plant may grow a metre. But that doesn’t mean if I left it a million months, it would grow a million metres, even if it were to be fed regularly with my home-made liquid fertiliser.

The “million metres in a million months” conclusion would be an absurd, unwarranted extrapolation of a quotidian observation; it would also be absurd to apply such logic to quantum mechanics, in which we’re dealing with atoms, and their building blocks, that are a million times smaller than a speck of dust.

There’s an implicit arrogance in assuming a world view built up using our synthesis of observations directly gathered by our five senses should be applicable to objects much smaller than the smallest object we can see, or indeed to objects and distances much larger than those we can directly apprehend.

The scientific method allows us to refine our flawed intuition, using reason to make sense of the data obtained by physicists using instruments that are thousands or millions of times more sensitive than our human senses.

We thereby build up a new intuition that’s counter-intuitive but leads to a successful description.

Many examples can be drawn from history:

Common sense and science frequently clash – and that’s not a bad thing.

Suppose I put a dried broad bean in a glass jar, screw on the lid and shake. Common sense tells us that the bean will just rattle around inside the glass jar. Quantum mechanics predicts there is a small chance the bean will escape from its prison by passing through the walls of the jar.

For beans trapped in glass jars, the chances of this happening are almost non-existent – but not quite zero. For really small beans (protons and neutrons, two of the building blocks of atoms) in really small jars (the nucleus of the atom), the chances of escape can become significant.

These quantum magic beans underpin the power of the atom bomb, nuclear reactors and certain forms of radiation poisoning.

That’s because an immense amount of energy is released when protons and neutrons escape from certain nuclei, such as plutonium.

Now imagine that I have two different beans, say a broad bean and a borlotti bean, and a jar. Here are four possibilities:

A) Both beans are in the sealed jar

B) The broad bean is in the sealed jar, and the borlotti bean outside

C) The borlotti bean is in the sealed jar, and the broad bean outside

D) Both beans are outside the sealed jar

Common sense says you can have A, B, C or D.

Quantum mechanics says you can have A, B, C and D all at the same time. Let’s call this quantum state of two beans “ABCD”.

In quantum state ABCD we can no longer speak of “the state” of an individual bean. We cannot speak of the borlotti bean as being inside the jar or outside; it is both at once. The same goes for the broad bean.

Such quantum states are “entangled” because the concept of the state of any individual part of the system loses meaning. The state of the whole system is ABCD, but don’t ask me what the state of the borlotti bean is, because this concept has broken down in the weird quantum world.

What use is this second piece of counter-intuitive quantum weirdness? It lies at the heart of current work to build a quantum computer, which may one day replace the computers at the heart of your laptop or phone, with computing machines vastly more powerful than any available today.

When the going gets weird …

Quantum mechanics is certainly weird, with beans jumping through walls, and being both inside and outside jars at the same time. It’s disorienting for so much big-world common sense to fly out the window when looking at the small world of atoms.

Should we be put off by what Erwin Schrödinger, of Schrödinger’s cat fame, called “damned quantum jumping”?

In a word, no: rather than being intimidated or surprised by the weirdness of quantum mechanics and other counter-intuitive ideas of physics, one should expect such physics to be weird. Indeed, one should wholly embrace this weirdness.

We should take solace from the fact that scientific method allows us to use our minds to see beyond the limitations of our intuition, thereby refining that intuition to see the hitherto unseen.

Through that process, scientific enquiry yields fruits (and legumes) that both enrich human culture and increase our power to better the human condition. 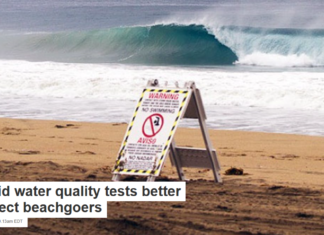 Staff Writer - May 27, 2019
Rachel Noble, University of North Carolina at Chapel Hill Planning a trip to the beach? Along with looking forward to some summer fun, beachgoers may...

Here’s how Trump-era politics are affecting worker morale – and what...