President Donald Trump and Congress are once again on the verge of a partial federal government shutdown. If they fail to reach an agreement, it would be the third shutdown in two years.

The immediate and most visible impact of a shutdown is in the government’s day-to-day operations. Some departments and offices, like the Internal Revenue Service, would be closed, and nonessential federal employees across the government would stay home.

Constantine Yannelis, a business professor at New York University, and I examined data from the 2013 government shutdown to better understand its impact.

Since consumer spending makes up about 70 percent of economic activity in the United States, withholding pay from even some government workers could introduce a significant economic speed bump in the short run.

Well over a million federal employees were affected and didn’t receive a paycheck during the shutdown. Some were furloughed – sent home and told not to do anything related to their job. Those deemed “essential” or “exempted” – such as security personnel screening passengers at airports or border patrol agents – were required to continue working at their jobs, although they were not receiving paychecks. The government eventually paid both groups the money owed them, regardless of whether they worked, after Democrats and Republicans reached an agreement on Oct. 16.

Second, households with a member who was furloughed and required to stay home from work slashed their spending more dramatically – by 15 percent to 20 percent, or almost twice as much as the average of those affected. This larger decline reflected the fact that these households suddenly had a lot more time on their hands. Rather than going out to eat or paying for child care for example, they were able to spend more time cooking and watching their own children.

This behavior is what tends to spread the economic effects of a shutdown that affects a slice of the population to a wider group of businesses and individuals behind Washington, D.C. And in regions with substantial numbers of federal workers, these declines in spending can greatly hurt the health of the local economy in the short run.

Whether or not a shutdown has a longer-term economic impact depends on whether employees are paid their foregone wages after its conclusion – and how long the shutdown lasts.

In addition, the longer the shutdown lasts, the worse its impact. Households might deplete savings or hit their credit card limits as the impasse stretches day after day, giving them additional time to adjust their spending in ways that they could not do with only a few days’ notice. For instance, in 2013, bills for health insurance or tuition payments were largely unaffected. Had that shutdown persisted, households may have started to cut back here as well.

So if Congress refuses to offer furloughed workers back pay and the shutdown lasts weeks rather than days, the economic impact could be severe.

This is an updated version of an article originally published on Jan. 19, 2018. 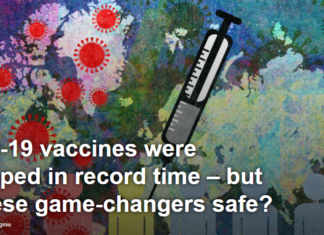 COVID-19 vaccines were developed in record time – but are these...

Staff Writer - November 21, 2020
William Petri, University of Virginia There are now two COVID-19 vaccines that, at least according to preliminary reports, appear to be 94.5% and 95% effective....

Electric school buses are taking students back to school – bringing...

We’re staring down the barrel of a technical recession as the...

For richer, for poorer: how married CEOs are less prone to...