Many of us would be hard-pressed to spend a day without using a lithium-ion battery, the technology that powers our portable electronics. And with electric vehicles (EVs) and energy storage for the power grid around the corner, their future appears pretty bright.

So bright that the iconic California-based upstart Tesla Motors stated that their newly announced residential Powerwall battery is sold out until mid-2016 and that the strong market demand could meet the capacity of their upcoming battery “gigafactory” of 35 gigawatt-hours per year – the daily electrical energy needs of 1.2 million US households.

When released by Sony in the early 1990s, many considered lithium-ion batteries to be a breakthrough in rechargeable batteries: with their high operating voltage and their large energy density, they outclassed the then state-of-the-art nickel metal hydride batteries (NiMH). The adoption of the lithium-ion technology fueled the portable electronic revolution: without lithium-ion, the battery in the latest Samsung Galaxy smartphones would weigh close to four ounces, as opposed to 1.5 ounces, and occupy twice as much volume.

This situation raises legitimate questions: What is coming next? Will there be breakthroughs that will solve these problems?

Before we attempt to answer these questions, let’s briefly discuss the inner mechanics of a battery. A battery cell consists of two distinct electrodes separated by an insulating layer, conveniently called a separator, which is soaked in an electrolyte. The two electrodes must have different potentials, or a different electromotive force, and the resulting potential difference defines the cell’s voltage. The electrode with the largest potential is referred to as the positive electrode, the one with the lowest potential as the negative electrode.

During discharge, electrons flow through an external wire from the negative electrode to the positive electrode, while charged atoms, or ions, flow internally to maintain a neutral electrical charge. With rechargeable batteries, the process is reversed during charging.

Lithium-ion batteries’ energy density, or the amount of energy stored per weight, has increased steadily by about 5% every year, from 90 watt-hours/kilogram (Wh/kg) to 240 Wh/kg over 20 years, and this trend is forecast to continue. It’s due to incremental refinements in electrodes and electrolyte compositions and architectures, as well as increases in the maximum charge voltage, from 4.2 volts conventionally to 4.4 volts in the latest portable devices.

Picking up the pace of energy density improvements would require breakthroughs on both the electrodes’ materials and the electrolyte fronts. The biggest awaited leap would be to introduce elemental sulfur or air as a positive electrode and use metallic lithium as a negative electrode.

Lithium-sulfur batteries could potentially bring a twofold improvement over the energy density of current lithium-ion batteries to about 400 Wh/kg. Lithium-air batteries could bring a tenfold improvement to approximately 3,000 Wh/kg, mainly because using air as an off-board reactant – that is, oxygen in the air rather than an element on a battery electrode – would greatly reduce weight.

Both systems are intensively studied by the research community, but commercial availability has been elusive as labs struggle to develop viable prototypes. During the discharge of the sulfur electrodes, the sulfur can be dissolved in the electrolyte, disconnecting it from the electronic circuit. This reduces the amount of lithium that could be removed from the sulfur during the charge and hurts the overall reversibility of the system.

The lithium-air battery, too, suffers from this difficulty of being repeatedly recharged as a result of problems caused by reactions between the electrolyte and air. Also, with both technologies, protection of the lithium electrode is an issue that needs to be solved.

For all of the aforementioned batteries, lithium is an essential component of the battery. Lithium is a fairly abundant element around the world but unfortunately only at trace levels, which prevents its worldwide commercial extraction. Although it is found in harvestable conditions in a few ores that could be mined, most of the production of lithium comes from brines of high-altitude salt lakes, mostly in the Andes in South America.

Despite this relatively difficult extraction, lithium carbonate can be found at around US$6 per kilogram, and since an electric vehicle battery pack requires only about three kilograms of lithium carbonate, its cost is not a major concern to date.

The concern here is more about geopolitics: every country seeks energy independence, and replacing oil with lithium batteries as a transportation fuel simply shifts the dependence from the Middle East to South America.

One possible solution would be to replace lithium with the element sodium, which is 2,000 times more abundant.

Electrochemically speaking, sodium is almost comparable to lithium, which makes it an extremely good candidate for batteries. Sodium-ion batteries research has exploded in recent years, and their performance, once commercialized, could be on par with their lithium-ion counterparts.

While sodium-ion batteries might not bring any significant cost or performance advantage over lithium-ion technology, it could offer a path for every country to manufacture their own batteries with readily available resources.

No matter what, all of these emerging technologies are likely to suffer from the same safety concerns as the current lithium-ion cells. The threat comes from the flammable solvent-based electrolyte which makes it possible to operate at voltages above two volts.

Indeed, because water splits into oxygen and hydrogen above two volts, it cannot be used in three volt-class lithium or sodium batteries and has been replaced by expensive flammable carbonate solvents. Alternatives such as solvent-free electrolytes do not provide a good enough conductivity for ions at room temperature to handle high-power applications, such as powering a car, and are therefore not used in commercial cells.

Fortunately, with the current lithium-ion technology, it has been estimated that only one in 40 million cells undergoes dramatic failure of a fire. Although the risk cannot be fully suppressed, engineering controls and conservative designs can keep it in check.

In sum, the current lithium-ion batteries offer fairly good performances. Emerging chemistries such as lithium-sulfur or lithium-air have the potential to revolutionize portable energy storage applications, but they are still at the lab research stage with no guarantee of becoming a viable product.

For stationary energy storage applications such as storing wind and solar energy, other types of batteries, including high-temperature sodium-sulfur batteries or the redox flow batteries, might prove more sustainable and cost-effective candidates than lithium-ion batteries, but that could be a story for another article. 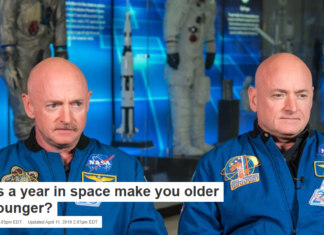 Does a year in space make you older or younger?