By Elana Levine, University of Wisconsin-Milwaukee

In the epilogue to Jill Lepore’s new book, The Secret History of Wonder Woman, we learn about Wonder Woman’s importance to the American feminist movement of the 1960s and 1970s. Lepore briefly notes Wonder Woman’s place in US television in the same period. But in skimming over the character’s TV life, she misses a key step in her cultural significance. In the history of Wonder Woman on television lies a story about the ways that popular culture in general – and representations of “wonder women,” in particular – seek to reconcile feminism and femininity at different historical moments.

The New Original Wonder Woman premiered in 1976 alongside two other action-adventure series with female leads, Charlie’s Angels and The Bionic Woman. This super-women trifecta made clear that the winds of cultural change were influencing America’s most popular (and often most conservative) medium.

In Wonder Woman’s first season, the program was set in the 1940s – staying true to the comic’s origins – with the superheroine battling the Nazis. Tied to her patriotism was her feminism.

“Any civilization that does not recognize the female,” Wonder Woman warned in one episode, “is doomed to destruction. Women are the wave of the future and sisterhood is…stronger than anything.”

And in an episode titled “The Feminum Mystique” – a play on the title of the bestselling feminist book – we learn about a mysterious, powerful matter buried deep in the earth of Wonder Woman’s Amazonian homeland: feminum. Her bullet-deflecting bracelets are made from this impervious metal.

The TV program’s creators were directly influenced by the character’s popularity as a feminist icon, but when the show switched networks in 1977, the story’s feminist message was diluted.

The setting was changed from the 1940s to the 1970s, and Wonder Woman became more overtly sexualized: she wore more revealing clothing, and stopped making the same explicit declarations about gender and power.

This shift was most directly an attempt to copy the hugely successful Charlie’s Angels. Like the Angels, Diana Prince could now go undercover in a number of titillating roles, including pop star and glamorous jewel thief.

But the 1970s TV version of the Angels regularly tempered its characters’ sexualization with mainstream, women’s lib-style references to “male chauvinists,” or showed that women could do what male characters did: shoot guns, fly airplanes, and drive 18-wheelers.

The later seasons of Wonder Woman tried for a similar balance, but more often than not, the message devolved into a celebration of the fundamental difference between the sexes. Wonder Woman’s compromised negotiation with feminism made the character’s femininity a stand-in for her power, a tendency that the Angels sometimes shared.

In other words, their power came from being sexy.

By the late 1970s, even the half-hearted attempts at championing feminism began to wane. Television delivered characters who were little more than sex symbols: Daisy Duke (Dukes of Hazzard) or Chrissy Snow (Three’s Company) were primarily defined by their sexy femininity. Only the non-sexy characters (Chrissy’s roommate, Janet, or the brainy Bailey from WKRP in Cincinnati) needed to worry about equality.

In retrospect, we can see this transition away from powerful “wonder women” characters as part of the rise of a postfeminist cultural sensibility: the idea that explicit feminist activism is no longer necessary in a world changed by feminism. Because this sensibility values the contributions of feminism, it can seem progressive. However, because it places feminism in the past, it suggests that past injustices have been resolved. It can work to perpetuate those very injustices by leaving them unchallenged.

One of the best recent examples is the series of Charlie’s Angels feature films, which present its heroines’ sexiness and power as one and the same. Explicit acknowledgments of an ongoing need for feminism has no place. This sort of subtle, but crucial, difference from the more overt feminist messages of the 1970s has dominated much of early 21st century media culture.

However, in recent years we’ve seen challenges to this thinking – and even an explicit embrace of feminism. Culturally, this has resulted in glimpses of the original “wonder women.” We might point to The Hunger Games’ Katniss Everdeen and the planned film that will feature superheroine Captain Marvel.

Even Wonder Woman is going to have a big-screen resurgence; her forthcoming appearance in Batman v. Superman will be an important test of whether the character’s feminist origins will return.

Today, however, feminist voices are more often being heard not in action movies but in TV comedies – perhaps a safer, more subtle space to introduce challenges to social assumptions. Some characters even overtly identify as feminists, like Parks and Recreation’s Leslie Knope. Others challenge the tenets of the postfeminist sensibility. In Lena Dunham’s Girls, Comedy Central’s Broad City, and even NBC’s The Mysteries of Laura, TV women critique postfeminism, satirizing its less-than-liberating consequences.

Laura Diamond is the protagonist of The Mysteries of Laura. She doesn’t battle Nazis or have superpowers, but she nonetheless offers a 21st century version of feminist sensibilities.
David Giesbrecht/NBC

A single mother and police detective, Debra Messing’s Laura does not “have it all,” as postfeminist thinking argues. Instead Laura has an ex-husband who fails to share responsibility for their children (he also happens to be her boss). She longs not for haute couture or male admirers but for time alone to eat what she wants and watch reality TV.

Perhaps it is these deliberately ordinary, flawed, often un-powerful women who may be today’s unconventional “wonder women,” subtly giving voice to the feminism we still need.

Elana Levine has received research funding from the University of Wisconsin, Milwaukee, the Walter Jay and Clara Charlotte Damm Fund, and the American Heritage Center, University of Wyoming. 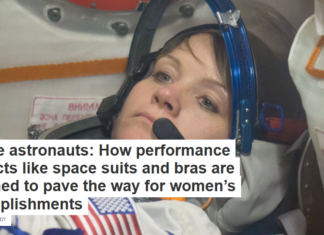 Staff Writer - April 7, 2019
Susan L. Sokolowski, University of Oregon On my first day of spring break, I woke up to way more emails than necessary and a flurry...

Video games can bring history back to life

When parents turn children into weapons, everybody loses