Failure by the two main Northern Irish parties, the Democratic Unionist Party and Sinn Fein, to agree on how to address the legacy of a violent past has been one of the main factors in the current political impasse at Stormont.

But even if politicians are making little progress, the people of Northern Ireland have shown themselves ready to talk about the past. It is no easy task, but, when approached carefully, it can prove beneficial to people on all sides of the debate.

One of the reasons that an agreement has not been reached is the claim that the 1998 Good Friday Agreement failed to address the past. Many believe it fudged the issue and focused instead on governing structures, which in turn lead to a tribal approach to democracy. Both unionist and nationalists have to agree major decisions before they can become law.

In such a vacuum, the process of addressing the past has often been tackled at a local level. And storytelling is one of the most significant ways of doing it. This involves using oral history to reveal, record, disseminate and address experiences of 30 years of political violence in the period commonly known as the “Troubles”.

There are digital archives containing audio and filmed accounts and storytelling networks that help different groups learn from each other. But even though storytelling has been identified as a useful means of addressing the past, the state has consistently refused to engage with the process.

Hopes were high when the Daniel Libeskind designed an International Peace Building Centre for the site of the Maze prison. First minister Peter Robinson appeared to give the project the green light but withdrew support within a few months. When questioned, he cited concerns over the creation of a “republican shrine”. The €18m grant awarded to the project had to be returned to the EU.

Still, other projects are thriving from the ground up. Duchas in west Belfast has recently worked with six community groups, including the Shankill Womens’ Centre, to publish a collection of oral histories. Retired members of the police forces collaborated on Green and Blue: Across the Thin Line – a collection of the experiences of security services during this period, and WAVE Trauma Centre’s Stories from Silence is an audio collection from those who lost someone or were seriously injured during this period.

The Prisons Memory Archive holds 175 filmed recordings from inside the now-empty prisons of the female Armagh Gaol and the male Maze and Long Kesh Prison. The idea of shared ownership is at the centre of the whole process – from filming to screening. All sides of the conflict are explored by bringing in the voices of not only prisoners but prison staff, probation officers, chaplains and relatives. This challenges the idea that there are only two sides to the Northern Ireland conflict.

The films are also produced using a life-story methodology. The people in each film are not asked questions but are invited to provide their own narrative as they walk around the prison. This makes them part of the authorship process but also, crucially, prevents them from having to answer questions that might incriminate them. This has been shown to be a serious problem for projects after the Boston College Belfast Project was forced to hand over tapes from their archive despite promising participants that they would be protected.

Screening these films at public events has thrown up many persistent issues about addressing the past. Participants seem to feel validated when their experiences are publicly acknowledged. They like to be involved in all stages of producing a story, including the editing and exhibition of the work. While audiences may find it hard to listen to others, it is important that they are offered the opportunity. And most importantly, we need enough resources to keep projects like these going. Telling stories about a politically sensitive past and a contested present is not easy but in the absence of a solution from the top, reconciliation needs to continue at the grass-roots level.

Cahal McLaughlin is the Director of the Prisons Memory Archive and receives funding from the Heritage Lottery Fund. 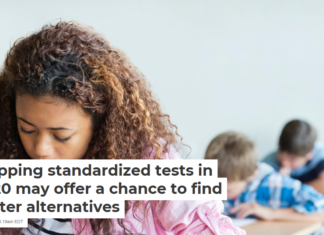 Skipping standardized tests in 2020 may offer a chance to find...

Staff Writer - May 20, 2020
James D. Kirylo, University of South Carolina The Education Department is letting states cancel standardized tests. The move is a practical one: School buildings across...

Poor people are penalised for borrowing to make ends meet –...

We trust children to know what gender they are – until...