Editor’s note: This is an updated version of an article first published on Jan. 8, 2017.

Since Donald Trump tapped Betsy DeVos to become the secretary of education, her name has been associated with a great deal of controversy and conversation. This came to fruition when she became the first Cabinet position in United States history to be confirmed by a vice president’s tie-breaking vote.

Much of this conversation has centered around Devos’ controversial past as a supporter, lobbyist and financial donor to causes that directly support school choice and school vouchers, and how she might further this cause as the next education secretary.

School choice is a controversial movement that advocates for parents to “choose” the school (public, private, religious, charter, home, online) they feel is best for their children. Tuition is paid for by redistributing funds from government public schools, or from vouchers that come from a government entity. School choice proponents believe this market-based approach spurs competition, causing all schools to improve.

Trump made his support of school choice clear during his election campaign – Trump’s campaign promised to earmark US$20 billion to the federal education budget to provide “choice” for students nationwide.

As a researcher of education policy and politics, related to e-schools and brick-and-mortar charter schools, I’ve been following the dialogue within the political and educational community and the concerns over what her tenure as secretary of education will mean for school choice and public schools.

Critics worry that what DeVos worked toward in Michigan is a foreshadowing for what is to come in the United States. DeVos pushed school choice for two decades in her home state of Michigan to improve education, with disappointing results.

Who exactly is Betsy DeVos and what can we learn from her past actions?

Betsy DeVos’ most recent job was running the American Federation for Children, an advocacy organization. The group’s self-described mission is “promoting school choice, with a specific focus on advocating for school vouchers, scholarship tax credit programs and Education Savings Accounts.”

In this role, DeVos lobbied the state of Michigan, and others, for legislation that promotes school choice.

DeVos currently sits on the board of directors for the Alliance for School Choice – a special interest organization that marshals donations toward legislative action in favor of school vouchers.

Michigan agenda and beyond

While in Michigan, DeVos and her husband worked to advance the choice and voucher agenda substantially. Together, they started the Great Lakes Education Project (GLEP) which has worked to provide funding and private training to state legislators to advocate for the redirection of public funds from traditional public schools to other options, including charter schools, private schools, parochial schools (private schools with a religious affiliation) and online schools. Several of these types of schools are run by education management organizations that earn profit from managing publicly funded schools.

The results of the increased choice in Michigan, and Detroit more specifically, are not clear. Stanford University released a study that claims that charter schools in Detroit have a slight edge over public schools. Conversely, a more recent study from New York City’s Independent Budget Office questions whether choice programs actually benefit lower-income students. Many scholars have questioned the broader choice agenda.

During Senate confirmation hearings in January, DeVos created more controversy with her responses to several questions asked by members of the confirmation committee.

In one exchange, DeVos was asked if she supported schools being gun-free zones. Her response was that a school in Wyoming might need a gun to fend off grizzly bears. In another exchange, DeVos stated she was “confused” after declaring that the enforcement of a federal law for students with disabilities should be up to individual states.

On Feb. 7, she became the first cabinet position in United States history to be confirmed by a tie-breaking vote by the vice president. Only two Republicans, Lisa Murkowski (Alaska) and Susan Collins (Maine), voted against her nomination.

Some might argue that in the United States, the federal government is secondary in crafting education policy because most educational decisions are left to states.

This is because the United States is a federal governmental system, and the Constitution, under which this system is governed, does not mention or consider the provision of education.

Despite the traditional understanding of state-controlled education, the national government has taken more power in the last several decades. The Department of Education budget has swelled to over $200 billion from just under $20 billion in 1980. Adding to the larger budget, Congress has passed several laws that promote educational accountability, which tie additional federal funds to state implementation of these statutory suggestions. It took the latest piece of federal legislation, called the Every Student Succeeds Act, to put some of this power back to the states.

Accountability is based on a system of standardized tests that measure specific pieces of information. Proponents of choice and vouchers seem to look to these tests as the evidence that show whether or not students are learning.

This market-based approach is debated by teachers’ unions, parents and others in the public education field – but all 50 states have adopted some sort of testing accountability.

The organizations with which Betsy DeVos has been involved view standardized testing data as an essential tool needed for accountability. They use this as the evidence to support a movement that redistributes public school funds and gives parents the choice to send their children to private schools or charter schools. Some refer to this as privatization and point out that the effectiveness of federal choice policies is still unclear.

How education policies might be influenced based on these past actions is hard to know. One early indication could be Trump’s budget proposal to the Congress. The education portion of his budget will reveal the intentions of the coming policies of the DeVos era and subsequent potential for “school choice.” 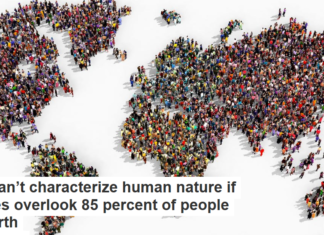 Staff Writer - November 18, 2018
Daniel Hruschka, Arizona State University Over the last century, behavioral researchers have revealed the biases and prejudices that shape how people see the world and...