Commerce Secretary Wilbur Ross announced last week that the 2020 census will include a question about citizenship. Ross argued that such a question is required for a “complete and accurate” count of Americans. Others in the Department of Justice have argued that the knowledge produced would be useful in ensuring against voter fraud.

Much recent commentary has focused on the ways in which Ross’ proposal might shift power from states with many undocumented residents to those with comparatively few – and, therefore, from Democratic states to Republican ones.

As a political philosopher who studies how abstract moral notions such as justice apply to political institutions, I am more concerned with the fact that undercounting the undocumented might introduce bias into our public policy. This bias might lead to injustice – toward citizens and noncitizens alike.

There is a long tradition in political philosophy that understands injustice as unequal treatment without justification. A state is unjust, on this account, when it treats different people in different ways – unless that particular difference in treatment can be shown to reflect some morally important difference between those people. In other words, if you and I are both subject to the law, I have the right to have my interests and desires treated as equal in importance to yours – unless we can find some morally important reason for us to be treated differently. The legal notion of equality before the law reflects this ideal.

It is for this reason that undercounting the undocumented could lead to injustice. The census will be the basis for the allocation of a great deal of funding – over US$600 billion, in areas including health, public health, nutrition and law enforcement. If the census were to count only citizens, rather than all residents, the budget allocations will not accurately reflect the actual number of people who will make demands upon public institutions.

To understand how significant this difference could be, consider these numbers: There are approximately 22 million noncitizens in the United States – which amounts to 7 percent of the population. These residents are not distributed equally between states. California, for example, has more than 2.5 million undocumented residents, whereas states such as North Dakota, West Virginia and Maine have fewer than 5,000.

Rights of the undocumented

One immediate reply here, of course, is to say that the question of injustice toward the undocumented does not arise. Since they have no right to legal residency, there cannot be an issue about fairness toward their interests.

From my perspective, the proper response to that objection is to notice that there are some things states must do even for those who are present without right. Think, again, of police protection. The police are bound by law and morality to protect the bodily and property interests even of those present illegally.

It is true that a person who is a resident in the United States without right is liable to deportation. But that liability does not give the local police the right to refuse to act on that person’s behalf. Someone can be rightly subject to deportation, but still be entitled to have their basic human rights defended prior to deportation.

The Supreme Court’s recent decision, in Evenwel v. Abbott, reflects these moral facts. This case involved a challenge to the Texan policy of creating districts that reflected total population, rather than the population of legal voters. A unanimous court declared that Texas was permitted to apportion voting districts by population – including the undocumented.

There are some interests, said the court, that are held by everyone resident in a place, “regardless of whether they qualify as voters.”

Impact on the climate of fear

The proposed question about citizenship, finally, is liable to exacerbate an existing inequality in the administration of justice. It is likely to make the current climate of fear in immigrant communities worse. The police are charged with protecting the rights of the undocumented, but they are also frequently called upon to deport them.

This dual role has made the relationship between the undocumented and the police more adversarial than effective policing would recommend. As Houston Police Chief Art Acevedo has noted, when people are afraid about interacting with the police, they are less likely to come forward as victims and as witnesses. The police, he argues, ought to “focus on crime, not be ICE agents.”

What is true for the policeman may also be true for the census-taker. Questions about citizenship may lead to a sense that even the census-taker – whose job is simply to get an accurate count of those resident within the United States – is helping the federal government with deportation. Sunshine Hillygus, who advises the federal government on the census, notes that this question is likely to fuel suspicion on the part of the undocumented that the census will become a political tool to be used against them – with negative implications for both data accuracy and for the long-run reputation of the Census Bureau as a nonpartisan agency.

It is not clear, at this point, that a question about citizenship will actually end up being a part of the 2020 census. Several states have filed a lawsuit, seeking to block Ross’ proposed question. Whether or not that lawsuit succeeds, the fact that this question is being considered should give all of us some moral concern – regardless of our perspectives on migration, and regardless of whether we are citizens ourselves. 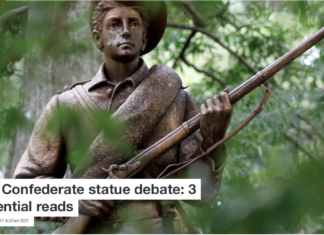 Staff Writer - August 19, 2017
Nick Lehr, The Conversation Editor’s note: The following is a roundup of archival stories related to the debate over what to do with Confederate statues. The...