Editor’s note: Private prisons have long stirred controversy, most recently over their role in housing undocumented immigrants and asylum seekers at the U.S.-Mexico border. Several states have banned them, several banks have vowed to stop financing them and more than one presidential candidate has pledged to end them at the federal level.

John M. Eason, associate professor of sociology at the University of Wisconsin-Madison, has done extensive research on private prisons. We asked him to provide some background on why they’re so controversial.

1. What are private prisons?

Private prisons are run or owned by corporations holding contracts with federal or state governments to house citizens convicted of a crime or immigrant detainees being processed for deportation.

The U.S. is one of only a handful of countries in the developed world that allow private entities to own prisons. Critics of private prisons point out that profit motives, coupled with a lack of oversight, can create incentives to minimize costs and care for inmates.

Some populous states like Connecticut, Michigan and Mississippi have slowed their rate of imprisonment, but in southern states like Texas, Florida and Georgia inmate populations are level or continuing to rise.

My recent research suggests that the number of prisoners has stagnated because we are not constructing new prisons. In the past, rising rates of incarceration was an outgrowth of the prison building boom.

Some states like New York have begun closing private facilities. Even some formally “tough on crime” groups have applauded these moves as fiscally responsible.

2. Where are they built?

New Mexico houses almost half of its prisoners in private facilities. Texas has the largest population of private prisoners.

Southern communities were three times more likely to build a prison during the height of the boom than any other. Prisons are most often built in poor communities of color.

3. Why are they controversial?

Those who argue for privatization say that it delivers services at lower costs, but studies show that gains in efficiency often comes with unintended consequences.

Many anti-privatization advocates believe that private operators are rife with exploitation. Almost all private prisons are operated by five companies and Corrections Corporation of America controls more than half the market with 53% of all facilities.

Private prisons have surfaced as an issue in the 2020 presidential election, and the country may soon see further reform of private U.S. prisons. 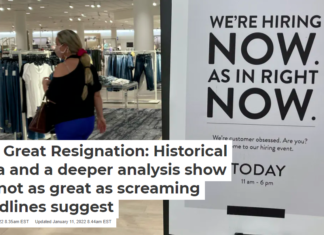 Staff Writer - January 11, 2022
Jay L. Zagorsky, Boston University The so-called Great Resignation was one of the top stories of 2021 as “record” numbers of workers reportedly quit...

How many lives have coronavirus vaccines saved? We used state data...

How Much of Your Data Would You Trade for a Free...

In a lockdown, where does work end and parenting begin? Welcome...