Ukraine and Russia have held intermittent peace talks since the end of February 2022, just days after Russia first launched a war.

Russian President Vladimir Putin squashed hope of an imminent peace deal on April 12 when he said that the talks “have again returned to a dead-end situation for us.”

Ukraine maintains that the discussions are still “taking place,” even as the “negotiations are extremely difficult,” according to Ukrainian presidential adviser Mykhailo Podolyak.

Russia’s continued attacks on the Ukrainian port city of Mariupol, as well as the mass murder of civilians in Bucha, make it hard to hold peace talks.

But as former Israeli Prime Minister Yitzhak Rabin once said, “You don’t make peace with friends. You make it with very unsavory enemies.”

Peace talks are always a complex mix of strategic calculation and human emotion.

In my 20 years of experience working on peace-building programs and researching peace and conflict, I’ve learned that it’s important to pay attention to both factors to understand why talks may – or may not – succeed.

The Conversation asked me to respond to the following questions about peace talks.

How often do peace talks fail, and why?

Most of the time.

Between 1946 and 2005, only 39 of 288 conflicts, or 13.5%, ended in a peace agreement, according to a research initiative at the University of Uppsala in Sweden. The others ended in victory for one side, or an end to fighting without a peace agreement or a victory.

But even when warring parties fail to reach a peace agreement, talks can reduce civilian casualties through temporary cease-fires or the establishment of humanitarian corridors to deliver supplies or evacuate civilians.

There is also evidence that even failed peace agreements reduce the intensity of future conflict.

How useful can peace talks be when warring parties are still fighting?

Peace talks can create a foundation for an eventual agreement to end conflict. They can also reduce harm to communities.

In my experience, cease-fire negotiations are often undertaken during a spike in violence. This violence can give impetus to reduce fighting in the future.

If warring parties agree to a cease-fire, and stick to that agreement, casualties on both sides can be avoided. They can also create an initial foundation of trust that can ease the way to more difficult negotiations.

The Nuba Mountains cease-fire agreement in Sudan, for instance, is credited with helping to build trust that allowed broader, and more meaningful, north-south peace talks to take place, starting in 2002.

Narrow agreements that help end violence and save lives may also be achievable. During the 2008-2009 Gaza war, for instance, while there was no agreement for a cease-fire, Israel did open a humanitarian corridor to allow lifesaving aid to be delivered to civilians.

Crucially, peace talks during war are not something warring parties do as an alternative to fighting. It is a strategy, used alongside fighting, to achieve one’s goals.

What are the greatest problems faced in peace talks?

The biggest challenge to peace talks is conflict-related violence, and the anger and mistrust it creates between different warring parties. Negotiators must sit across from those they believe have killed their sons and daughters.

Violence in the Ukraine war has been pervasive and widespread, affecting soldiers and civilians alike. In Ukraine, more than 1,842 civilians have been killed by Russian forces, according to U.N. estimates. The actual number of dead civilians is likely far higher.

This means that there must be compelling, strategic reasons to negotiate.

More often than not, however, one side believes it is winning and doesn’t have an incentive to negotiate. In Afghanistan, for instance, the Taliban pulled out of peace talks in 2021 as they were making significant military gains and the United States had announced it would withdraw troops.

What brings negotiators to the peace table?

A stalemate that hurts both sides can bring different parties to the table.

Both sides realize they are being harmed by the status quo but also know that they cannot defeat the other side militarily. Negotiations are then a logical way forward.

Once at the table, the negotiators, often supported by neutral mediators, work to arrive at some version of a solution whereby they both feel they have won something. A core goal is to craft agreements that create a kind of mutual gain.

Negotiators must not only reach an agreement but also sell that agreement to a community that is angry, traumatized and grieving.

This is just one reason that it’s important to include all kinds of people, including women, community organizers and different ethnic leaders, in peace talks. Their inclusion means that public acceptance of the peace deal grows as the negotiations proceed.

But the most common model – as in the case of Ukraine and Russian talks – is still for a few elite men to negotiate an agreement, and only then do they try to sell it to key constituencies back home. Authoritarians even need support for peace agreements, even if is just from the military to avoid a coup.

Can you count on good faith from other participants during peace talks?

Peace negotiators need to build some kind of working relationship just to organize peace talks. These relationships, though, do not guarantee those at peace talks will negotiate in good faith. In South Sudan, for instance, peace negotiators were accused of participating just so they could stay for weeks at a time in luxury hotels.

In Syria, President Bashar al-Assad was often accused of engaging in peace talks as a public relations strategy, or to allow his military to regroup before their next attack on civilians.

Good-faith negotiations happen only when it is in the best interests of the parties to reach an agreement.

Russia, meanwhile, has been accused of poisoning two senior Ukrainian peace negotiators, as well as Russian billionaire Roman Abramovich, during a round of talks concerning the Ukraine war in March.

Russia’s alleged violation of these customs will make it all the more difficult for peace talks between Russia and Ukraine to reach a successful outcome. The talks will likely be long and arduous and require smaller, confidence-building steps before the war will end.

Andrew Blum, Executive Director and Professor of Practice at Joan B. Kroc Institute for Peace and Justice Kroc School, University of San Diego 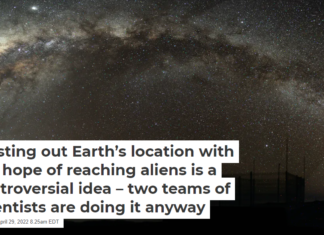 Staff Writer - May 1, 2022
Chris Impey, University of Arizona If a person is lost in the wilderness, they...

The Supreme Court’s immense power may pose a danger to its...