Many pointed out the injustice of the practice. They argue that it is sexist, painful and traumatising. They also point out that virginity is irrelevant to whether or not an officer would be able to do her police duty.

But few have questioned yet the most dubious aspect of this harrowing practice: the validity of the test itself.

Virginity testing is not unique to Indonesia. Women in many countries are often required to endure the test for reasons that often have nothing to do with the woman’s interests. Turkey, Egypt, Morocco and Iraq, to name a few, have had their fair share of controversial virginity testing.

In one case in Turkey in the early 1990s, a student committed suicide after undergoing a virginity test instructed by the principal of her school.

The ways the test is done could vary from one place to another. We are now familiar with the term “two fingers test” conducted by Indonesia’s National Police. In some places in Iraq, the test is visual. A woman is considered a virgin when there is no visible sign of “defect” on her hymen.

In one particular village in Morocco, the test is somewhat more imaginative. A bride to be is required to undergo “the egg test”. She is to lie on her back with her legs spread out. The examiner, usually an older woman, would then crack an egg open onto her vagina. If the egg slipped into her, she would be considered to be no longer sexually untouched.

No matter the method, there are two aspects often used to determine a woman’s virginity: an intact hymen and a tight vaginal opening. Both are still widely believed to signify virginity in women; neither is a reliable basis for such a conclusion.

The myth of the hymen

Let us start with the hymen. The hymen is a membrane in the vaginal canal. Doctors are still in disagreement on its function. Many believe that it has simply no particular use to the woman’s body.

If the use of this membrane is considered a mystery, the shape of its virgin state is one of the biggest medical myths around. Many are under the impression that a virgin hymen resembles either one of these two things: a balloon-like membrane covering the vaginal canal, or a ring-like flesh with a smooth edge.

Some people think that riding a bicycle can result in tearing of the hymen.
My Good Images/Shutterstock

Some believe that any disturbance to the hymen will result in its tearing. Hence it is not uncommon for girls to be advised to be careful when riding a bicycle or for young women to avoid using a tampon for fear that they can break their hymen.

In reality the hymen looks more like — using the words of a doctor who frequently performs hymen reconstruction — the petals of a flower. It has notches, folds and clefts, even in its virgin state. It is flexible with different densities. Some hymens are thin and some are thicker than others.

In the event of a penetration, the hymen might be scarred. Yet, quite often, the hymen stretches and is left undamaged.

It is then inaccurate to think that a sexual act will always result in changes to the hymen. There have been many cases that show women who are in possession of an annular smooth-edged hymen can in fact have been sexually active for years.

The opposite is also true. A virgin woman’s hymen might have a big opening and several clefts here and there; this is the type of hymen that many incorrectly believe to signify that a woman has experienced sexual penetrations.

This is why sexologists, gynaecologists and general practitioners alike are often reluctant to be asked for their opinion on whether or not a woman is a virgin based on the condition of her hymen. Doctors in the Netherlands resort to using the following form of words when subjected to such request:

There are no indications to suggest that the woman in question is no longer a virgin.

Trauma to the hymen is not easy to determine – so much so there have been studies to show that forensic experts on cases of child sexual abuse often are not able to discern the signs of maltreatment on the hymen of a female child. This is especially true in cases when the child was taken to the hospital some time after her mistreatment.

The second aspect that is often checked is the tightness of the vagina. There is a widespread belief that a woman who is sexually untouched has a tight vaginal opening because of the intact hymen and that a man can discern that during intercourse.

This is a mistaken assumption. The tightness of the vagina is not caused by the hymen membrane but as a result of a contracted pelvic floor muscle. The more it is contracted, the narrower the vaginal canal is.

It is noteworthy that when a woman is feeling anxious, particularly when it comes to sex, she automatically tenses up her pelvic floor. Many doctors attribute this as the reason a virgin woman is often felt to be “narrow” by her partner.

To women who are looking to be “narrower”, doctors in the Netherlands advise them to practise contracting their pelvic muscle. This is akin to holding it in when nature calls but you simply cannot go yet.

The tensing up of the pelvic muscle was also what doctors prescribed to the woman who consulted them because she would be expected to undergo “the egg test”. The woman passed the test with flying colours.

Any type of virginity test that relies on the observation of the hymen or of the tightness of the vagina is inconclusive, at best, or completely invalid. The belief that it is easier to discern the virgin state of a woman than a man is more of a fable than a scientific fact. Unfortunately, it is a fable that is still widely believed and practised to subjugate women.

No-one, neither a woman nor a man, should ever be compelled to endure such questioning, regardless of the reliability of the exam.

But it is worth pondering that as the testing tool at hand is highly unreliable, why would anyone even dare to entertain the imposition of such fallibility? 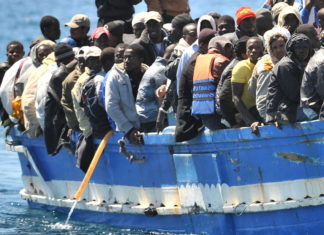 Staff Writer - October 29, 2014
By Nando Sigona, University of Birmingham The UK government is seeking to defend its decision not to support rescue missions for migrants making the dangerous...