Editor’s note: President Donald Trump, in his first State of the Union address, took credit for a growing economy, urged Congress to invest more in infrastructure and defense and promoted an immigration plan that ties citizenship for Dreamers to border security and an end to family-based migration. During the 80-minute speech – the third-longest State of the Union – he touched on a wide range of topics, from the opioid crisis and MS-13 to North Korea and foreign aid. We asked three academics to choose key quotes and add the context missing from the president’s words.

“This is in fact our new American moment. There has never been a better time to start living the American Dream.”

To back this up, Trump said we’re finally seeing rising wages after years of stagnation, noted that the stock market is smashing “one record after another” and highlighted Apple’s recent plan to “invest a total of $350 billion in America” and hire 20,000 workers.

While the newness of this moment in American history is debatable, the economy under President Trump is following a well-worn path set down by the previous administration. And that’s fairly good news indeed. The question is, can he claim credit for any of it?

It is true that we are finally seeing rising wages, but these gains go back well into the Obama administration, and in fact the past year has seen only modest wage growth. The stock market’s winning streak is impressive. Of course, this trend also began under Obama.

The key point is that these economic trends are largely beyond the control of the current administration, or any administration, for better or worse. As an example, real income fell over Trump’s first year in office in part due to rising inflation, which eats into every dollar’s buying power. There’s not a lot a president can do about inflation.

What about increased investment by U.S. companies like Apple? Here the president is on surer footing in claiming that the tax cuts he signed into law last year are having an impact. Unfortunately, Apple is not investing $350 billion – at least not yet, it’s simply repatriating money it has always had access to – and its plans to add 20,000 jobs appear largely unrelated to tax cuts or other government policies.

At the same time, the tax cuts will undoubtedly spur new capital investments, some of which may eventually lead to modest pay raises for U.S. workers, credit for which should go to President Trump and congressional Republicans.

Trump also highlighted Exxon Mobil’s very recent announcement that it will invest billions in the U.S. as a response to the tax bill. Once again, Trump’s actual words turned out to be too good to be true. He boasted $50 billion, but $15 billion of that was previously announced. Still, $35 billion as a result of the tax cuts is serious money.

In summary, on the economic front there is basically good news. Good enough, in fact, to be honest with the American people about the state of the union.

The state of our infrastructure

“It is time to rebuild our crumbling infrastructure … I am asking both parties to come together to give us the safe, fast, reliable and modern infrastructure our economy needs and our people deserve.”

The president is right about this. U.S. infrastructure is in utter disrepair. The American Society of Civil Engineers gave it a D+ grade in its most recent report. Trump proposed spending $1.5 trillion to fix the problem.

While tackling it is surely necessary, the president’s solution is flawed in terms of both timing and method.

First, the timing. An infrastructure program was needed in 2009, after the U.S. economy collapsed and job creation was paramount. But today, unemployment stands at 4.1 percent, near full employment. The new tax law passed in December will likely further boost spending and reduce unemployment. Except during wars, when young men were fighting overseas rather than making things in the U.S., the unemployment rate has rarely dipped below 4 percent over the past 70 years. With immigration off the table, where will we find the workers to build this infrastructure?

Second, in terms of method, the president wants state and local governments to “partner” in infrastructure projects and pay part of the cost. This will require that they raise taxes. Areas in good financial health, such as New York City, will be able to do this. Areas struggling economically and in most desperate need, such as Flint, Michigan, will not.

In my view, the economic problem we face today is not insufficient spending, which an infrastructure program would remedy, but excessive corporate power that is hurting American workers. The real incomes of full-time U.S. workers, which have stagnated for decades, fell by 1 percent in 2017 alone, even as stocks and CEO pay soared.

The solution to this problem involves strengthening worker rights, not weakening them, as the Trump administration policies have been doing. I believe giving workers a meaningful raise is far more important than improving our nation’s infrastructure – as bad as it is, our paychecks are worse.

“It is time to reform these outdated immigration rules and finally bring our immigration system into the 21st century. These four pillars represent a down-the-middle compromise, and one that will create a safe, modern and lawful immigration system.”

The four pillars the president outlined in his speech include a path to citizenship for 1.8 million immigrants brought to the U.S. as undocumented children, increased border enforcement, termination of the visa lottery and an end to “chain migration.”

I believe the first proposal rightfully brings Dreamers out of limbo, and I applaud the president for taking this stand. The other three “pillars,” however, rest on shaky foundations that deserve closer scrutiny.

Trump’s second pillar – more border enforcement – seems to be premised on the notion that new immigrants are synonymous with drugs, gangs and depressed job and wage growth, and that only his “beautiful wall” and more border agents can protect Americans. This ignores the fact that immigrants are less likely to commit serious crimes than native-born Americans. As for MS-13, which Trump spotlighted as a source of violence in his speech, it is a homegrown gang, born and bred in the streets of Los Angeles, California, not native to Central America.

As for claims that immigrants hurt natives, the evidence is clear and substantial that they do not. Little competition occurs for the low-wage occupations that employ undocumented immigrants, such as those in agriculture, garment manufacturing, and domestic work. In fact, removing immigrants would hurt our economy through the loss of sales taxes, property taxes and other economic contributions.

Trump’s third proposal, to terminate the visa lottery, willfully misrepresents immigration law. The diversity visa lottery – despite its name – does not “randomly hand out green cards” but allocates 50,000 visas each year to countries with low rates of migration. To be eligible, applicants must meet various educational, occupational, security and health criteria.

And his fourth pillar not only contains falsehoods but a derogatory slur that dehumanizes the men, women and children who seek a new life in the U.S. Trump’s desire to end “chain migration” rests on claims, which he repeated in the address, that immigrants with permission to remain in the U.S. exploit current policy by sponsoring “virtually unlimited numbers of distant relatives” to join them.

This is far from the truth. Only parents, spouses and unmarried minor children may be sponsored through family-based immigration.

The pillars Trump proposes are not, in my view, a “down-the-middle” compromise with the guarantee of a “safe, modern and lawful” system. If lawmakers agree to such a plan, all immigrant communities would pay a steep price, even if protecting Dreamers is a worthy goal. 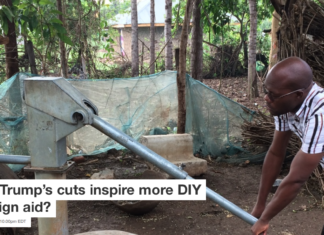 What did the Romans ever do for us? They left a...

Stress is contagious in relationships – here’s what you can do...