With all the time that young people spend in front of screens these days – from TVs to laptops, cellphones and iPads – children are bound to see a lot of ads and commercials.

To take advantage of all the time that is spent being plugged in, companies are spending billions of dollars on slick techniques to get attention. And it’s working. For instance, children between the ages of 2 to 11 see an average of 25,600 TV ads a year.

As entertaining as commercials may be, research has shown young people can’t always separate fact from fiction. For instance, a 2016 study found that out of 7,804 student responses, more than 80 percent of middle school students believed that web ads were real news stories. The same study found that more than 80 percent of high school students had a hard time distinguishing between real and fake photos.

Based on this evidence, America’s young people, it seems, could benefit from media literacy – a subject that is one of the focal areas of my research. Media literacy is about being able analyze and evaluate the messages we see in different media platforms.

For parents and others who want to empower children to be more aware of how commercials influence what they think and do, here are three ways to use media literacy skills to accomplish that end. The tips may be particularly useful during major TV events that prompt companies to make special commercials, such as the Super Bowl or the Oscars, which airs on Feb. 24.

While ads can help young viewers socialize as consumers and tell them about products, research also shows that young audiences aren’t always able to detect persuasion in advertising.

The National Association for Media Literacy Education suggests that people get in the habit of asking questions so it can help them intelligently process the information to which they are being exposed.

One of the questions viewers should ask is: Who created the message? All media messages are constructed by an author. Thinking about who that is helps create distance from the message of the commercial itself.

Viewers should also ask if the commercial appeared credible. Commercials often transport many of us into a story world. Resisting the enticement of stories allows viewers to stay grounded in a critical mindset.

Young viewers should be encouraged to ask how a commercial made them feel. Advertising relies heavily on people’s emotional reactions. Becoming more aware of how we’re made to feel during an ad can give us a clue about its effect on us.

Young viewers should also be encouraged to analyze what techniques were used to get their attention. Media makers use a variety of creative techniques to catch our eye, like bright colors, humor or celebrity endorsements. Focusing on how words, colors or camera angles affect the way we see or hear the message is important to analyze its appeal.

By teaching young viewers to question the “behind the scenes” of commercials, it will better enable them to understand the production techniques that marketers employ to sell their seemingly perfect products.

Dialogue and reflection are important aspects of media literacy. Talking about commercials with others creates a common ground to exchange perspectives.

Young viewers should also be encouraged to ask why a particular message is being sent. Most media messages are typically developed to generate revenue or influence decisions Young viewers should be taught to look for motives, such as to inform, persuade or entertain.

Also, young viewers should be encouraged to ask what values are represented? Commercials often carry underlying themes that deal with politics, sexuality or identity. Looking at the points of view represented in the message is important to detect how chosen values are being reinforced.

By reflecting on the techniques and motives surrounding commercials, parents, educators and others can teach young people to make better sense of the many commercial messages they will see throughout their lives. 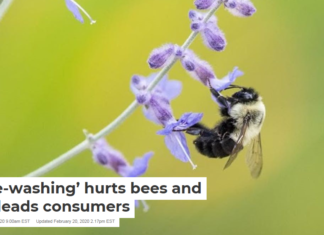 Staff Writer - February 23, 2020
Lila Westreich, University of Washington Amid the worry over the loss of honey bees, a far quieter but just as devastating loss is occurring among...