On October 25, at City Year’s Annual Gala in Levi’s Stadium, the non-profit youth organization will honor Silicon Valley power couple, Metta and Keith Krach, with its 2018 City Year Citizen Leadership Award. It’s the first time City Year will bestow the honor on a couple, recognizing their inspiration, dedication and service to educational causes. What brings the Krachs and City Year together is a shared dedication to transformational leadership, a commitment to paying it forward, and the mission of transforming young lives.

“I have such great admiration for Metta and Keith Krach, and we are delighted to honor them at City Year San José/Silicon Valley’s 2018 gala,” said Michael Brown, CEO and co-founder of City Year. “Metta’s love for helping children and communities, combined with Keith’s passion for leadership and mentoring, generates a powerful force for civic impact in the Bay Area and beyond.”

“The City Year Gala is always a memorable evening to honor the world’s most dedicated visionaries,” said Bill McDermott, CEO of SAP and recipient of the award in 2015. “Metta and Keith are leaders of consequence. It’s my honor to congratulate this dynamic duo making a profound impact on people’s lives.”

“Keith and I share a common vision of the world and a deep need to try to help where we can. As we tell our children, it is all about making a difference—a big difference, a small difference, but most importantly, a meaningful difference. This is how we want to raise our children, with a deep spirit of generosity and gratitude,” said Metta Krach.

City Year was conceived and founded in 1988 by Michael Brown and his Harvard Law School roommate, Alan Khazei. The two young men were convinced that young people doing volunteer service could play a powerful role addressing some of the country’s most difficult problems. They created City Year to recruit and train young people to give a year of full-time voluntary service to their communities.

Since then, City Year has expanded, opening sites in 28 cities throughout the U.S., as well as sites in several other countries, and has focused its mission on helping at-risk students in under-served schools reach their full potential and graduate from high school. To accomplish that, City Year members serve as tutors, mentors and role models in high-need schools.

Inspired by City Year, president Bill Clinton enlisted the help of Michael Brown, Alan Khazei and others to establish AmeriCorps through the National and Community Service Trust Act of 1993. Since then, more than 1 million AmeriCorps members have contributed upwards of 1.2 billion hours of public service.

According to Krach, “Michael, and City Year, are doing a marvelous thing, by instilling in others a notion of the importance of civic duty and civic leadership.” Krach believes that like many countries that require military service at 18, the U.S. should encourage its next generation to serve in some capacity, whether it’s in the military or social service. AmeriCorp members are perfect examples of this.

Krach’s first introduction to City Year came at the organization’s 2016 Gala, when Krach’s friend, Microsoft chairman, John W. Thompson received the City Year Citizen Leadership Award. As it turns out, John Chambers, former CEO of Cisco, Bill McDermott, CEO of SAP, and Shantanu Narayen, CEO of Adobe were honored with the award in the two years prior. All four men are long-time friends of Krach’s and John Chambers had been his mentor for many years. With that first exposure, both Keith and Metta Krach were immediately captivated by City Year’s mission, leadership, and philosophy.

Prior Citizen Leadership Award honorees agree that the Krachs and City Year fit hand-in-glove. “After 20 years of friendship, I know Keith understands the most effective way to develop great transformational leaders is through the power of mentorship,” said John Chambers, former CEO of Cisco and recipient of the award in 2014. “Metta and Keith are true believers not only in City Year’s noble cause but also in their pay it forward model.”

“Metta and Keith make a strong team with a shared passion for supporting all causes related to education,” said John Thompson, Chairman of Microsoft and 2016 honoree. “Their initiative in establishing the DocuSign Impact Foundation will leave a lasting legacy.”

As Krach was building a relationship with City Year, he recognized Brown’s genius as a social entrepreneur and invited him to serve on the DocuSign IMPACT Foundation’s board of advisors.  Krach introduced Brown and City Year to the whole “DocuFamily” by partnering with City Year to help drive their mentorship mission with a 2-for-1 matching of employee donations, product contributions and a ‘Hack-For-Good’ hackathon at this year’s Momentum user conference.

Krach is convinced that Brown is a shining example of a transformational leader–someone who challenges the status quo by mobilizing and empowering people to achieve a noble cause that will have a profound and far reaching impact.

Both Keith and Metta Krach’s own track record for transformational leadership is well known—both in business and in their work to “pay it forward” through philanthropy, education, and mentorship.

Keith’s philanthropic endeavors include his work as founder and chairman of the DocuSign Impact Foundation, chairman of New Story Charity advisory board, service on the board of governors of Opportunity International, and the Children’s Autistic Network, to name just a few. Metta serves on the board of San Francisco Symphony, and the board of trustees & executive committee for the Bay Area Discovery Museum.

In higher education, Keith is Chairman Emeritus of Purdue University’s board of trustees, and served as the International President of Sigma Chi Fraternity. Meanwhile Metta serves on the board of the Georgetown School of Law, and from 1997-1999 was International Sweetheart of Sigma Chi.

When it comes to mentorship, Keith has recently founded the Virtual Mentor Network, whose mission is to develop transformational leaders at scale through video-based virtual mentoring. And both Keith and Metta have mentored scores of young leaders throughout their lives and careers.

The Krachs believe that transformational leadership is for anyone with an honorable mission who wants to make a significant impact. Because everyone has a noble cause burning within them. 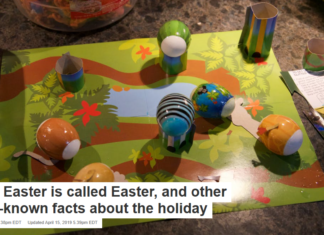 Why Easter is called Easter, and other little-known facts about the...

Staff Writer - April 21, 2019
Brent Landau, University of Texas at Austin On April 21, Christians will be celebrating Easter, the day on which the resurrection of Jesus is said...

How scientists are fighting infection-causing biofilms