By Mervyn Bain, University of Aberdeen

In the United States and Cuba’s strained relationship over the past 50-odd years, certain key flashpoints stand out: the Bay of Pigs incident, the Cuban Missile Crisis, and many more. December 17 2014 can now be added to the list.

On that day, one of the most problematic issues in the relationship was resolved when the US citizen Alan Gross, who had been imprisoned in Cuba for over five years for illegally importing satellite equipment to the island was released from prison and allowed to return to the US, along with an unnamed US intelligence agent.

And in what very much appeared to be a prisoner swap, the remaining members of the “Cuban Five”, a group of Cuban intelligence officers imprisoned in the US for infiltrating exile groups in Florida, were also allowed to return home.

But above all, the US president, Barack Obama, announced a number of sweeping changes to Washington’s Cuba policy.

These included the start of bilateral talks to recommence diplomatic relations, an examination of the reasons why Cuba remains on the list of State Sponsors of Terrorism, and the relaxation of travel, trade and information flows between the two countries. He also said that he would welcome Cuba’s return to the Organisation of American states (OAS).

This of course raises the question of why these unexpected events have occurred now.

Put simply, change is in both countries’ interests. Cuba’s main motive may be a base economic one: since the death of Venezuela’s Hugo Chavez in February 2013, Cuba’s supply of oil has been in jeopardy thanks to both both Venezuela’s unstable economy and the prospect of a post-socialist government in Caracas.

Meanwhile, the political influence that Cuba wields throughout Latin America has left the US somewhat isolated in the region. Washington’s out-of-date Cuba policy has only compounded this major political problem, and embarrassed it at crucial moments.

The recent Ebola outbreak in West Africa has shown just how damaging the situation is for the US’s image; Cuba has been a major player in the international effort against the disease, but the US’s unwillingness to work with Havana has come across as absurdly outdated Cold War rhetoric, and seemed ludicrous in the face of a desperate humanitarian crisis.

In addition, the composition of the highly important and influential Cuban American exile community within the US is changing, and its politics have changed too. Whereas previous generations were traditionally Republican-voting and pro-embargo, younger generations have a far more circumspect stance.

The sudden announcements reflect the deep changes which have been taking place in Cuba, and particularly in foreign policy, since Raúl Castro became president in 2008. They are also in accordance with Obama’s May 2008 promise to reset relations with Cuba and Latin America at large.

Of course, real change to the American embargo against Cuba will be difficult. The freeze on trade and travel is codified in US law, and it will require a majority of the US Congress to vote to overturn it. This may be a big ask, not least since Cuban-American members of Congress are unlikely to back the change.

Meanwhile, only days before the announcement, former governor of Florida Jeb Bush could become the Republican Party’s presidential candidate in 2016. His brother George W Bush tightened the embargo during his presidency, and the expectation is that Jeb too would hardly be inclined to offer a friendly hand to Havana.

Still, this is not to detract from the truly historic events and announcements of December 17. At last, the remnants of the Cold War that remain in place across the Florida Straits are being dismantled, and that is a major cause for celebration. 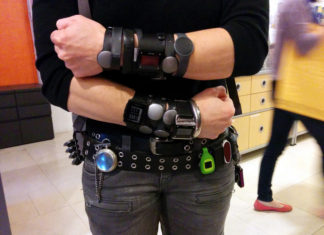 Staff Writer - March 14, 2015
By Zhenyu Li, George Washington University There is certainly no shortage of headlines on wearable sensors these days. “A contact lens measures your glucose level.”...

Maria Montessori challenged and changed how kids are taught, and remains...