Editor’s note: After 9/11, Americans responded with the kind of outpouring of generosity usually reserved for the most powerful hurricanes and earthquakes. Ever since those terrorist attacks, the Indiana University Lilly Family School of Philanthropy has tracked donations from people, businesses and foundations after natural and man-made disasters. Here are some of the highlights of what they’ve learned.

How quickly do donations roll in?

Most Americans who donate to support disaster relief act quickly. They give to charities that can help with relief efforts when they see photos and video clips that capture the fury of the storms and the devastation wrought by hurricanes and earthquakes.

Americans typically make these donations within six weeks of a big disaster, when media coverage is the most intense. Their contributions usually slow to a crawl six months later, once the cameras stop rolling and news cycle moves on.

Giving after Hurricane Katrina marked an exception to this rule. Total donations for relief efforts after that storm almost doubled from the second month to the sixth month, rising from US$2.2 billion to almost $3.7 billion.

How much do Americans give after disasters?

While massive donations from celebrities get the most attention, most of these contributions are small and from people you’ve never heard of. Almost half of Americans reported giving money to charities for disaster relief after Katrina and almost three-fourths donated after 9/11, we found.

The typical, or median, gift following both emergencies was $50 per household, and few households donated more than $100, according to data we analyzed from the Conference Board, a business research group.

Major disaster-relief initiatives from corporations and prominent Americans, however, do make headlines. In some cases, they are designed to inspire mass philanthropy. Consider these examples announced shortly after Harvey made landfall:

What kind of people give?

To learn more about who gives to relief efforts, we studied the demographics of people who made donations to charities that raised money to support victims of the 9/11 attacks.

We found that older people were more likely to contribute. For each additional year of age, individuals were 3.4 percent more likely to donate for 9/11 relief, regardless of their income, education and marital status.

We detected few other statistically significant differences among donors. That is, Americans gave the same way whether they were men or women, white, black, Latino, Asian-American or Native American, if they were high school dropouts or had graduate degrees, if they had young children, grown children or no kids at all.

We also found that men were significantly less likely to donate in-kind items than women.

How much do Americans donate for big relief efforts?

Americans often give on a big scale to major relief efforts within our borders and abroad.

Within six months of the emergencies that arose from Hurricane Katrina in August 2005, U.S. donors wrote checks totaling $4.2 billion, which we believe is the highest total ever. They gave $2.6 billion after 9/11 victims, $1.8 billion after the 2004 Indian Ocean tsunami and $1.5 billion following Haiti’s 2010 earthquake, the three other largest waves of donations since 2001.

Significant but smaller sums were raised after the earthquake and tsunami that rocked Japan in 2011 and after Superstorm Sandy.

It is too soon to say how much Americans will donate to support relief efforts after Hurricanes Harvey and Irma and other recent disasters. But whether they’re large or small, these donations are extraordinarily generous and generally altruistic. They help strangers without expecting anything in return. 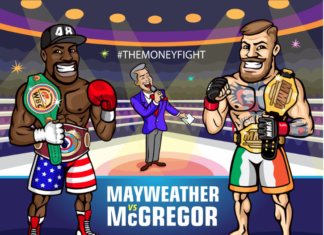 Staff Writer - August 25, 2017
Robert O'Neill, University of Huddersfield Las Vegas is soon to host one of the most lucrative boxing matches of all time. Dubbed “The Money Fight”...

5 ways Biden can help rural America thrive and bridge the...

Terrifying dragons have long been a part of many religions, and...