As Ramadan draws to a close, Muslims around the world prepare to celebrate the festival of Eid al-Fitr to mark the end of a month of fasting from dusk till dawn and additional acts of worship. On Eid, as in Ramadan, community is an integral component of Islamic observance, and many Muslims gather in their local mosque in communal prayer.

But not all Muslims belong to a religious community, and sacred dates in the Islamic calendar can prove profoundly isolating for those Muslims who are “unmosqued” – that is, not affiliated with a particular mosque community.

This may especially be the case for Muslims who are female, nonbinary, queer or converts. After all, most mosques in the U.S. and around the world are patriarchal spaces where men occupy the main prayer area and dominate leadership roles.

In many mosques, women are given inferior prayer spaces that are typically cramped and poorly ventilated. While in recent years American Muslim women are increasingly taking on leadership roles on mosque boards, they are still underrepresented and continue to have limited access to religious learning.

However, a growing number of Muslim spaces provide an alternative culture. One I’ve been studying is the Women’s Mosque of America, a multiracial women-only mosque in Los Angeles. It exists alongside a small number of other alternative mosques including women-led, mixed-gender and queer-affirming mosques in places ranging from Berkeley, California, and Chicago to London, Copenhagen and Berlin.

What is the Women’s Mosque of America?

The Women’s Mosque of America was founded in 2015 by two South Asian American Muslim women – comedy writer M. Hasna Maznavi and attorney Sana Muttalib. It was conceived as a space to empower Muslim women to take on active roles in their individual community mosques and influence changes in a mosque culture that is often unwelcoming to women.

The mosque hosts monthly Friday prayers where women exclusively run the services. One woman calls the adhan, or call to prayer, while another delivers the sermon and leads the all-female congregation in prayer. Yet, as I explore in my forthcoming book, the mosque’s contribution to creating a different kind of Muslim community is not simply its placement of women in leadership roles, but rather the way it elevates particular issues as worthy of concern in religious communities.

For example, with women at the helm of this mosque, the sermons focus on connecting Islamic scriptures to women’s lived experiences in both their personal and professional lives.

Topics have ranged from sexual violence, divorce and motherhood to social justice activism and support for the Black Lives Matter movement. As I learned in my interviews with community members, congregants are eager to hear these types of sermons, which they see as missing in their traditional mosque communities.

The mosque promotes the idea that religious authority can be held by lay American Muslim women, as opposed to only male religious scholars with traditional credentials.

Most of the women who deliver sermons and lead prayer at this mosque do not have formal religious training or Arabic expertise. They are a racially and ethnically diverse group who bring their various professional and community activist experiences to their roles as religious authority figures.

The mosque is committed to building community by flattening the hierarchy of religious leadership. For example, after the prayer is complete, congregants sit together in a circle with the prayer leader, asking her questions and engaging in a general religious dialogue with one another.

Moreover, the mosque is invested in using scriptural teachings to work toward social justice causes in the U.S. particularly with respect to anti-Black racism and Islamophobia.

The Women’s Mosque of America appeals to women who are dissatisfied with mainstream American mosques and eager to take on more central roles in their religious development. Its alternative culture also appeals to Muslim women who may have otherwise turned away from their faith.

And in providing opportunities for women to preach and lead prayer, I contend that the Women’s Mosque of America pushes American Muslims to collectively reimagine the very notion of religious community by raising important questions about what a mosque is and whom it should be for. 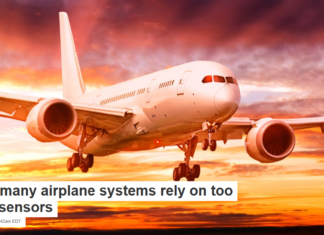 Too many airplane systems rely on too few sensors

Staff Writer - April 8, 2019
Carlos Varela, Rensselaer Polytechnic Institute The apparent connection between fatal airplane crashes in Indonesia and Ethiopia centers around the failure of a single sensor. I...